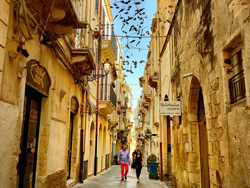 Ancient temples dating back to the dawn of Western civilisation, dramatic volcanic landscapes, dreamy medieval villages, sunny beaches with crystal clear water, warm-hearted and welcoming people – Sicily is Italy at its best, and it brings together everything we love about this beautiful country.

Arguably one of the finest locations on this gorgeous island is the city of Syracuse, a place steeped in history that boasts an incomparable wealth of antique and medieval architecture. If you’re looking for somewhere to immersive yourself in Italian culture and delve into the island’s rich past, Syracuse is the destination for you!

A journey back in time

Isola di Ortigia is the heart of Syracuse’s ancient architecture. When crossing the bridge from the mainland to the island, you’ll travel from modernity back to the Sicily of the past. As you stroll through the labyrinthine alleys that Syracusans have walked for centuries, you’ll pass majestic churches that have been houses of prayer since the Dark Ages and stately palazzi where Sicilian nobility resided at the peak of their glory.

Begin your journey through time at the ruins of the Tempio di Apollo. In the 6th century BC, when Syracuse was the greatest Greek city in the Mediterranean, this temple was a splendid place of worship. Today, green grass and white daisies cover the remaining foundation blocks, while broken columns stand as a silent reminder of the city’s former glory. 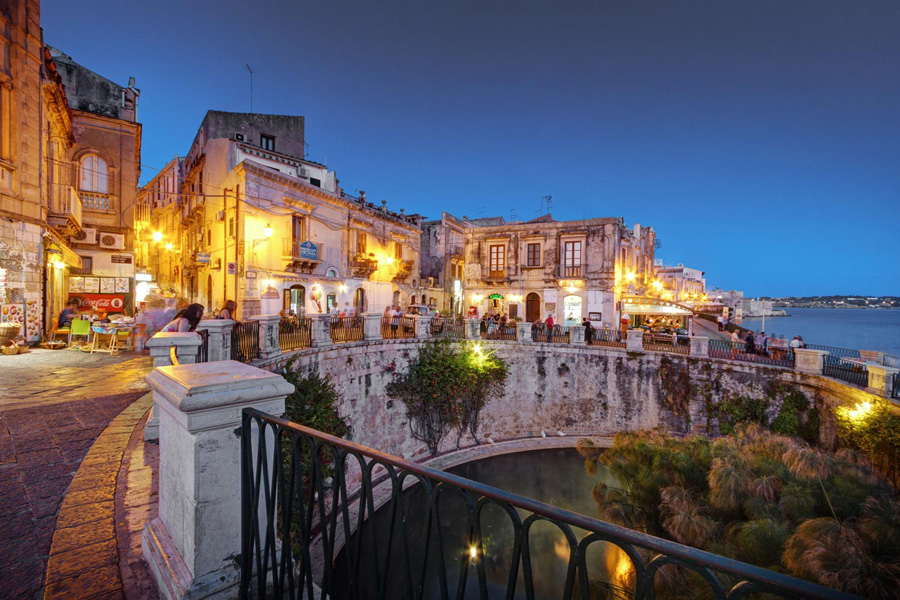 Continue to explore the remains of ancient Syracuse by visiting the myth-enshrouded Fonte Aretusa. This freshwater spring mysteriously wells directly next to the ocean and was crucial for the water supply of the early Greek settlement here. In fact, this water is probably the reason that Syracuse was founded in the first place!

Steeped in legend, this fountain is said to be the embodiment of the nymph Arethusa, who was transformed into a well to escape the unwanted attention of the river god Alpheus. In despair, Alpheus turned into a river to feed the spring and reunite with his beloved. Whatever the truth behind the myths, the Fonto Aretusa is without any doubt a magical place, and one of only two places in Europe where papyrus grows. This spring is best enjoyed at sunset when the last rays of the day give the bay and the well a gorgeous, mystical atmosphere.

Castles and palaces of old 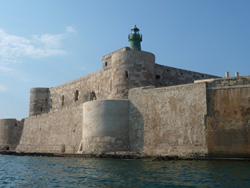 To take your journey into the medieval era, walk from Aretusa Bridge to the Castello Maniace. Rising on the outermost tip of the island, this castle dominates the bay. It started out as a fortress defending the city and later turned into a royal residence, before being transformed into a dreadful prison. Throughout Syracuse’s chequered history, this castle has persevered until today and now serves as a tourist attraction that gives visitors an insight into the power of medieval Sicily.

If you want to feel like a Syracusan patrician for a few hours, you should visit the Palazzo Borgia del Casale. This beautiful baroque palace allows visitors to relive the pomp and splendour of Italian aristocracy. Its magnificent frescoes, fragile furniture, luxurious marble floors, and sumptuous chandeliers are a delight!

To finish your journey, you should visit a place which unites all the different periods of Syracuse’s eventful history. The Duomo di Siracusa was originally built as a temple to Athena and used to be one of the most important shrines in Sicily. Under Byzantine rule, the temple was transformed into a church; it was later used as a mosque during the Emirate of Sicily, and finally converted into a church again after the Norman conquest. Today, you can still see the columns of the original temple integrated into the church walls.

While the Isola di Ortigia undoubtedly offers the best of medieval and baroque architecture, the Parco Archeologico della Neapoli is home to the most impressive remains of Syracuse’s history. During the Age of Antiquity, the city was a Greek colony at the height of its power. In fact, no fewer than 300,000 people lived here back then – that’s more than double the population of today! Cicero called Syracuse “the greatest Greek city and the most beautiful of them all”, surpassing even mighty Athens and militant Sparta. At the peak of its cultural and scientific blossoming, the city gave birth to geniuses like Archimedes, whose tomb can be visited in the city to this day. 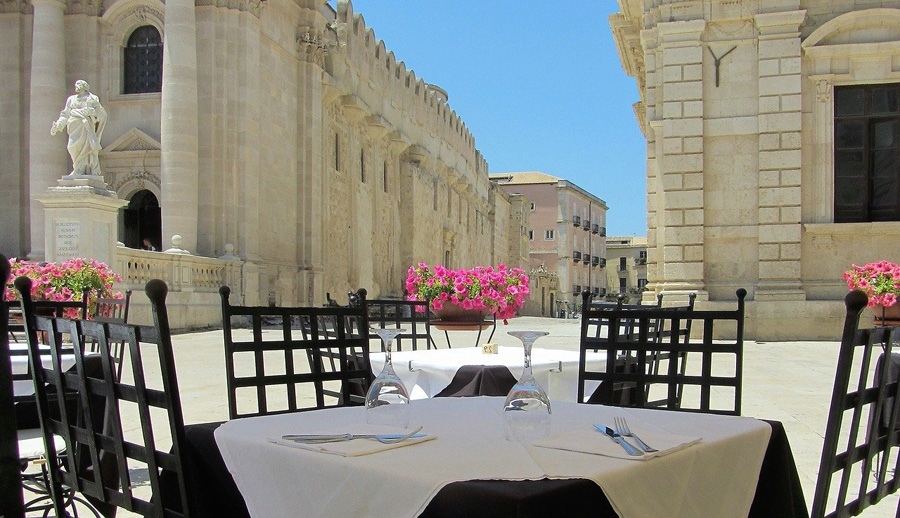 When you enter the archaeological park, you’ll catch a glimpse of ancient Syracuse during this golden age. The heart of the park is the magnificent Greek theatre, in which up to 20,000 spectators were entertained in ancient times. The Roman amphitheatre is another important and impressive monument from Syracuse’s glorious past. The Ear of Dionysus is a limestone cave inside the park with very special acoustics that make every word echo eerily in the darkness. It’s said that the tyrant Dionysus used this cave to secretly spy on his prisoners.

By the way: our Italian language school is located just a stone’s throw away from this amazing park. Learning Italian right next to a place full of over 2,000 years of history is pretty cool, right?

The area around Syracuse doesn’t just offer lots of historically important places; here you’ll also find some of the best nature experiences on the island. The Riserva Naturale Orientata Cavagrande del Cassibile is a lovely green valley carved out from the surrounding mountains by the River Cassibile. The stream often forms beautiful, crystal clear ponds and little waterfalls, each surrounded by lush vegetation. Together with the bizarre limestone terraces of the valley, they form an enchanting scenery which you can admire during a scenic hike along the river.

While this nature reserve is a lovely place that shouldn’t be missed, you’ll hardly find a place in Sicily – or even in all of Italy – which surpasses the dangerous beauty of Mount Etna. Europe’s most powerful volcano rises on the coast of Sicily, dominating the entire eastern portion of the island. If you come here for a hike, you’ll experience the colossal power of nature. Close to the craters, you just have to bow down in the icy wind and feel the warm air heated by the volcanic power beneath. While hiking in the nature reserve, you’ll spot many places where lava rolled down the mountain and buried streets and even houses beneath it. There is a terrifying beauty in this landscape, which has been formed and reformed over and over again by the power of the seemingly silent volcano. 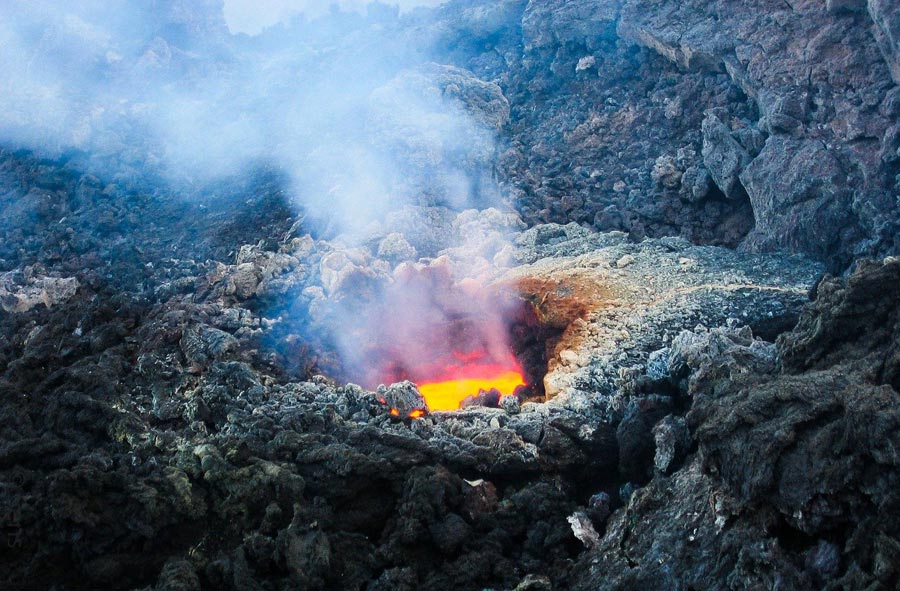 If you take an Italian course in Syracuse, you’ll be spoiled for choice for how to spend your afternoons and weekends. Learn about the city’s past through a visit to an archaeological site (or several), go on an adventure trip to an amazing nature reserve, or relax on one of the countless amazing beaches along the coast. Not only does the coastline south of Syracuse offer some of the best beaches on the entire island, but it also has the perfect weather to enjoy them! From June to August, the city has an average precipitation of just 1 mm! Now, that’s hard to top! Even during the coldest months, temperatures don’t exactly go down to arctic standards – an average of 12°C during January is the chilliest you’ll get here. As you can see, Syracuse will welcome you with pleasant weather all year round, no matter when you decide to visit. 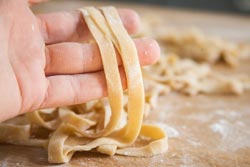 If you’re a history buff, you’ll hardly find a better place than Syracuse, but this city also offers a lot when it comes to enjoying life’s little pleasures. After all, Sicily is well-known for its mouth-watering cuisine. From crispy fried rice balls over fresh red prawns (eaten raw, by the way) to classic pasta with local vegetables, Sicilian cuisine is as diverse as it’s delicious.

Would you like to learn how to make some of these iconic dishes yourself? At our Italian language school, you can combine your language tuition with activities centred around Italian food and wine. You’ll tour a traditional street market to select the freshest ingredients, learn how to cook using traditional Sicilian recipes, enjoy the best Italian gelato, and become a connoisseur of Sicilian vino. 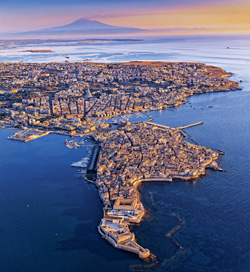 If you prefer culture over food, you can also complement your Italian lessons with an immersive cultural programme. Exciting excursions will take you around the island to amazing spots like Mt. Etna or the Archimedes Interactive Museum. Such activities will allow you to dive into the local culture and become an expert about Sicily.

No matter whether you prefer cookery lessons or cultural excursions, private lessons or group courses, our language school in Syracuse offers a wide choice of programmes and activities that will allow you to tailor your trip to your own preferences. If you’d like our experienced language travel advisers to help you choose the most suitable programme, don’t hesitate to contact us!