The celebration of Sinterklaas (Saint Nicholas) 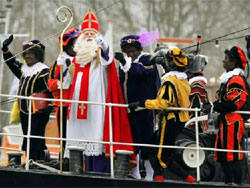 The 5th of December has always been a special day in the Netherlands. Unlikely to what some people might think, this tradition has nothing to do with Christmas, but because there is an old and white bearded man involved (Sinterklaas) who is dressed in red, some tourists that have been in the country around December might describe it as a second Christmas. But in fact, it is something completely different! This tradition might sound a bit peculiar to people who didn’t grew up with this typical Dutch celebration, but I will try to explain it below.

For many children in the Netherlands, Sinterklaas is one of the main events of the year, second to their birthday and on the same par as Christmas. It isn’t just celebrated by families; youthclubs and schools also tend to have a celebration of their own.

It all starts with the arrival of Sinterklaas and his reliable helpers, the zwarte Pieten (black Pete’s) and his horse Amerigo. They arrive in mid-November (depending on municipality), all together on a big steamship from Spain. Parents take their children to the nearest port to watch the entrance of the friendly old man. The largest event takes place in Amsterdam and is broadcasted on national television. The helpers are acting like acrobats, they run and jump around and hand out candy to the children. 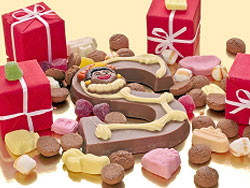 Until the 5th of December, children can put their shoes next to the fireplace, radiator or the door before they go to bed. They mostly leave a present as a drawing or a letter for Sinterklaas and Zwarte Piet or a carrot for Amerigo in their shoes. The story goes that Sinterklaas, Zwarte Piet and Amerigo visit all the children’s houses at night and put some small toys or candies in the shoes of the kids that have been good over the past year. Typical treats are marzipan, gingerbread cookies, and the first letter of the kids’ name made out of chocolate. The naughty kids will not receive any treats, be careful, Sinterklaas knows everything!

On the 5th of December, ‘pakjesavond’ is celebrated. This means gifts-evening. Family comes together and Zwarte Piet (often another family member) leaves a big hessian bag filled with gifts for the children in front of the door. During this evening, many amateur actors offer themselves to play for Sinterklaas and Zwarte Piet on pakjesavond. ~

Sometimes a family member dresses up for the occasion but in most cases pakjesavond is celebrated with family only and without the presence of the good old man and his helper(s).

The origin of Sinterklaas 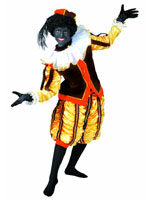 There are different stories about Saint Nicholas/Sinterklaas, but they all tell that Sinterklaas is the patron saint of children. There is a story about three school kids that were killed by an innkeeper, but Sinterklaas brought them back to life. Another story tells that Sinterklaas gave three poor sisters enough money to allow them to get married and in the last story Sinterklaas safes a child in a burning house by putting it in the bath tube.

Originally Sinterklaas comes from Turkey, there is no clear explanation why the Dutch let him come from Spain every year. The helper was added to the story later, there are different stories about the origin of Zwarte Piet as well, some people will say he is black because of the soot in the chimney, as he was originally a chimney sweeper, and the soot blackened him. One origin story is that Sinterklaas set him free from a slaver in Ethiopia and Zwarte Piet decided to help Sinterklaas to show his gratitude.

The last story about the origin of Zwarte Piet is a particularly controversial issue for obvious reasons. In recent years Dutch citizens of Caribbean ancestry have begun protesting the portrayal of Sinterklaas’s helper as a racist caricature. In October the debate exploded, polarising cultural life and dragging in celebrities, politicians, and even the UN.

Now it is not sure if the Dutch Zwarte Piet will be banned for upcoming festivities, or that changes will be made in his apperance (for example without black make up that completely covers the face or the frizzy hair). The results of the research conducted by the UN are due to be handed over to the Human Rights Council in September 2014. This year the mayor of Amsterdam also got involved in the debate, suggesting that changes could be made for the hundreds of actors that are due to play the character in 2013. In the meantime, people in the Netherlands prepare to celebrate Sinterklaas as usual this year.

Either way, with controversial celebrations or not, Amsterdam is still a fascinating and beautiful place during the winter season and it is possible to study in a teacher’s home on a Dutch language course with Apple Language Courses.