Christmas in the Netherlands 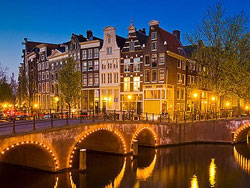 Christmas in the Netherlands is a lot like in many other countries, with the traditional Christmas tree, presents, many lights everywhere and nativity scenes. It’s a religious holiday for many, so people often go to church on Christmas Eve or Christmas Day for a late evening mass. Something that’s a bit different from many other countries in the world is that the 26th of December is ‘Second Christmas Day’.

Something Dutch people typically do for dinner on (first or second) Christmas Day is ‘gourmetten’: everyone at the table makes their own dinner by using a table grill that also has small pans for every person at the table, so you can prepare your own tiny pancakes, roast vegetables, meat or melted cheese. Fondue or ‘proper’ Christmas dinners with turkey, duck or roast are also popular. As dessert the Dutch often have ‘kerststol’.

For me, New Year is usually less of a big thing than Christmas. On 31 December I don’t really do anything special during the day. From 10 in the morning (till 2 am on 1 January) you’re allowed to use fireworks, so many people do.

In the evening we usually watch TV, because there are special New Year’s programmes on, as well as many films. Around midnight many people like to talk about the past year and about their New Year’s resolutions.

A special Dutch treat on New Year’s Eve is ‘oliebollen’: these are round-shaped sort of doughnuts, generally with currants inside, that are served with powdered sugar. Another treat is ‘appelbeignets’, which are made in the same way (with batter in a frying pan) but these are usually a bit flatter and they have a slice of apple in the middle. I personally really love them!

Of course at midnight there are fireworks. We usually go to a place nearby that’s a bit higher up, so we can see the fireworks from a few different towns at the same time, and we have champagne! After this, young people usually go out to party till early in the morning.