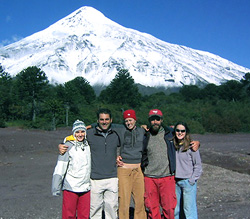 I have been at the Santiago school for five weeks now, and I absolutely love it! I know that my spanish has improved tremendously and I have so many opportunities to practice it. Immediately after arriving, I felt very welcomed by the teachers and staff. Everyone is so friendly here!!

I was a little nervous as to what my host family would be like, but I absolutely love them. I live with a woman and her 4 year old daughter. Everyday I can practice my spanish by talking with them. They live about 10 minutes walk to school which is perfect for me.

END_OF_DOCUMENT_TOKEN_TO_BE_REPLACED 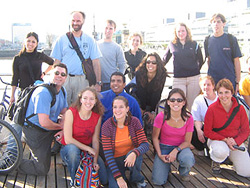 My name is Cameron, from Texas, USA and I want to talk about my Spanish Abroad Program in Chile this year.

My experience in the school in Santiago… Well, I’ve been studying in Santiago for 3 weeks now, and it has been amazing!!! I can´t believe that the staff at the school could be so incredibly helpful, and so willing to work around what you want to do….anything you need, you just ask – they help you as many times as you want!

END_OF_DOCUMENT_TOKEN_TO_BE_REPLACED

Staying (MUCH) longer than I’d planned! 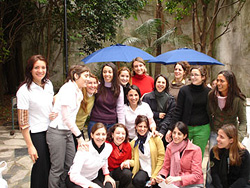 I’m French but I used to live in Florida. As my working permit was expiring I had the option to go back to France or move to another country. In United States I met a couple people from Chile. We immediately became friends and they would go on and on about how great their country was. I thought that I had to see that for myself and I decided to move there, probably for a year or two at the most. That was the plan…

I have to admit that Santiago was something else! Apart from the fact that the city was much more developed than I thought, I was pleasantly surprised to find cute streets, beautiful buildings, a rich culture, a very positive atmosphere and lots of vegetation.

Sure this was nice, but I still spoke no Spanish and if I were planning on staying, I had to find a Spanish school. The first one I found was expensive and only proposed individual classes: this wasn’t the right way to make friends (after all, I only knew those two Chileans I met in the US!). This first school I visited actually was the one that directed me to the School where I ended up studying. A school vouching for another one? I had to check it out.

END_OF_DOCUMENT_TOKEN_TO_BE_REPLACED

Chile, here I am! 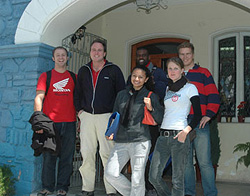 I had the chance to spend a half year in a foreign country because of my studies. As I am studying Spanish back home in Germany, it was obvious that I should do a Spanish course in either Spain or South America.

So, I decided to go to Chile! Why? I can’t explain, but it was just such a feeling, a great chance I thought.

When I arrived in Chile everything was totally new and I was so excited to be in this country. I was truly impressed by its landscape, the Andes with its snow on the peaks and also in Santiago de Chile Mount San Cristóbal with its statue of Virgin Mary.

While we drove to my accommodation, an apartment belonging to the Spanish school in which the students can live, I recognized some people listening to “Cumbia” and dancing to the music on the street. And just in that moment I thought: “Yeah, this is right for me… and I really want to get to know this country!”