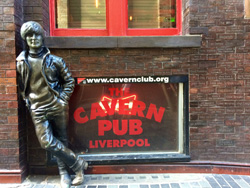 The next morning, as promised on Tuesday, our teacher brought back up the story with the random suggested words. He also spent some time going through our homework with us whilst we were engaged in other useful tasks. Actually, in the stories all the verbs were only at Past Simple or, (horror!) at Present Simple!

It was so satisfying to be able to edit and check that texts and it was useful to consolidate all the Narrative Tenses knowledge as well. IMPRESSIVE WORK!

The exercise of the day was similar to the previous one – we’re studying the Past, anyway! – and it consisted of writing a line of a story, following an already-written sentence; then, we had to fold the paper and to give it at next couple who continued the plot “in the dark”.

The final stories were hilarious and the grammar was much improved. This was down to both the studies we were doing about the subject and the fact that each couple had jut one single sentence to create. It was a really interesting exercise once again and we all appreciated the dedicated attention to each sentence. 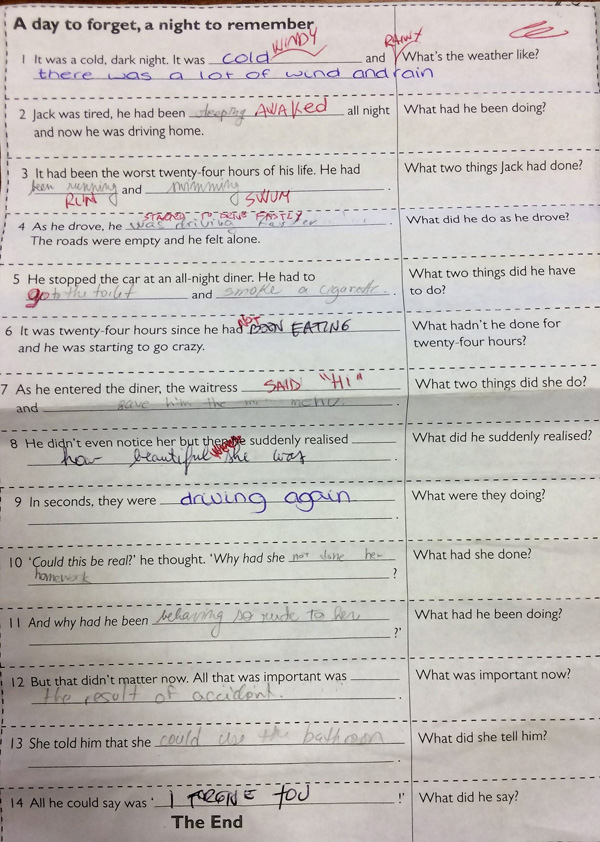 An example of one of the exercises in my English lesson!

Second teacher of the day

I was really happy about the second teacher on Wednesday. Part of this is because we covered a very arduous subject for me: wishes and regrets. This means the use of conditional and subjunctive, in present and in past forms. That was a fun lesson also!: it wasn’t a classical lesson you’ll be used to at high school, but it was so communicative – you had to talk lots with your partner or with the whole class. Even the chosen topic, was very enjoyable! 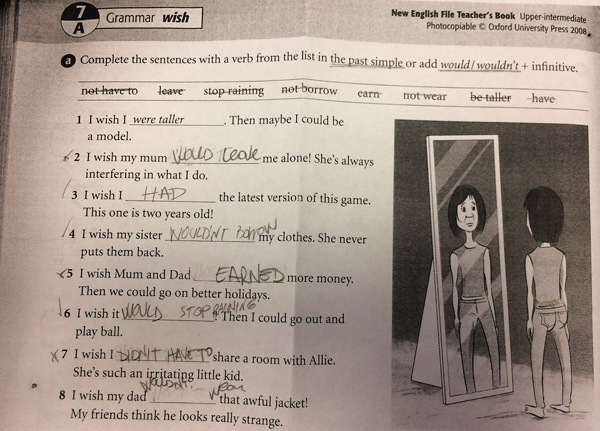 I loved spending break time in the common room after the morning lesson, with my new friend. However, on Wednesday it was so warm and sunny, so: what better day to visit the famous Crosby Beach? 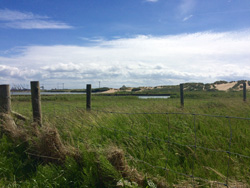 Immediately after lunch, I took the subway until the north suburbs of the city, Waterloo stop. After an outstanding walk I arrived at Crosby, where you can admire the amazing one hundred iron statues by Antony Gormley. The whole project is known as ‘Another Place‘ and it really is a magical place! The walk to reach the beach is literally immersed in nature, in the sparkling lush green of the best British grass. There is even a little lake with ducks and swans. 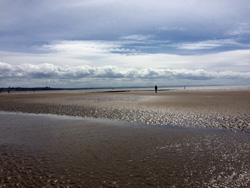 Closer to the beach the nature becomes almost Mediterranean, rich in shrubs above wonderful sand dunes that you need to cross to arrive at Crosby beach. The surprise of this location is really intense. You see a seemingly endless sweep of sand, lined b 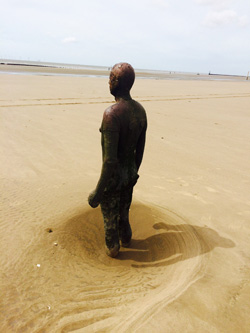 y many rivulets and, in front of the beach, the sea expands as far as the eye can see. It’s even more stunning thanks to an off-shore wind farm. This reminded me of European windmills which was surprisingly stirring!

Even with all the incredible nature it is the statues that are so valuable to this unreal place. It’s hard to understand if they are so amazing due to the surrounding natural beauty or, if it’s their solemn simplicity that help make Crosby so beautiful. As described by the artist himself: “Another Place harnesses the ebb and flow of the tide to explore man’s relationship with nature”.

The statues are stood up, oriented to look out towards the horizon. They are exposed to the water, the sand and the wind and will only become more ingrained in to the surrounding nature as they age. They let the salty seawater, sand and wind eat in to their surface. Molluscs live in their joints and rust changes their colour. It is almost like you can feel them or even empathise with their situation! They are clear man-made and metallic but slowly giving in to nature. However, with the human form (a cast of the artist, I believe) they are like living creatures that guard the surrounding immensity of the beach.

It was a truly unforgettable experience!

And now on to… The Beatles! 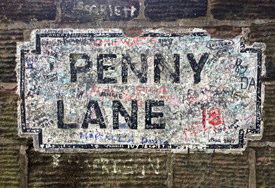 Music in Liverpool really means just one thing to the rest of the world: The Beatles! I enjoyed, in a relaxing way, the wonderful music scene in Liverpool all week. You can tell that locals here have a strong sense of culture and music in general.

Then, with the music in my ears (literally, thanks iPod!) I decided to follow the Beatles trail in the city where they were born and where they started. I reached the south suburb of Liverpool, in the opposite side of the city to Crosby. Here I wanted to visit the real authentic Penny Lane and the ex-novo Strawberry Field. I took a couple of pictures here that I’ll never delete from my phone!

The day by the seaside and busy afternoon made hungry for fish! I went home to cook a tasty tuna pasta with a fillet of mackerel. Strolling through the Beatles neighborhood gave me a strong desire to… go to the Cavern Club! So, after dinner, I went there, on time for a late evening concert.

The event on Wednesday night was called “Amazing Guitar” and it was a selection of musicians, who played the guitar and sand some of the best rock songs ever! They were all doing a great job with lots of famous covers. Congratulations to all of them, they were very talented and captivating. Of course, the main band on this cover playlist are, again, The Beatles. 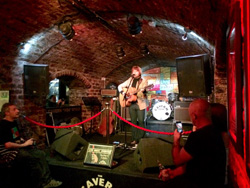 The cavern club might not be as special as you imagine, but it was really special to me! It was a little smaller than I imagined, but the history, location and the furniture (which seeps rock at every corner) all added to the special atmosphere. Many music legends have played the Cavern over the years. In fact the day before Bruce Springsteen’s guitarist was there. You can tell that the people in the Cavern club are all having lots of fun. There were a lot of energetic Scouses, excited tourists and students that dance and drink together, of all ages!

What a Wonderful day and wonderful night! Liverpool continues to surprise and delight me!

See you for next time for Thursday’s blog post!