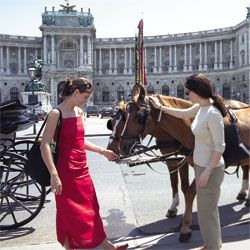 An absolute must is the museums quarter. Even if you’re not a fan of museums it’s worth going for a walk just to enjoy the breathtaking architecture of the huge buildings.

Schönbrunn Palace is also a wonderful place to visit. In 1996 it was accepted by UNESCO as a world cultural heritage site and as soon as you see it you will know why

I can’t list everything that’s worth seeing in Vienna, because the list would be awfully long, but I can guarantee there is something for everyone!

A really funny thing about Austrian people is that they have disgusting names for some dishes. An unforgettable example is a sausage with melted cheese and bread, which they call “Eine Eitrige mit nem Buckel” which means something like “a pus with a hunchback”!!

My Viennese host family also contributed to my unbelievable good time in Vienna. As soon as I arrived I was part of their family. On the first evening they took me to a typical Austrian restaurant where I had my first “Wiener-Schnitzel” with potato salad. Even though it was delicious I couldn’t finish it….. It was just too much!

The eldest daughter in the family gave me a lot of good tips about where to go out at the weekend. I went to ‘Flex’, a club which is European-wide known for its excellent sound system and to ‘Arena’, which was saved from being knocked down in 1976 through 3 month sit in! I also went to a lot of other great clubs and pubs in Vienna, but these two impressed me the most.

There is really nothing more for me to say than GO AND VISIT VIENNA! It’s a great place for a German course. You won’t regret it.!