Kitzbühel: the gem in Austria’s crown 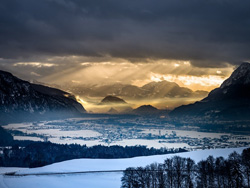 Nestled between high mountains like a pearl held in an oyster shell, Kitzbühel is a true gem. It’s a typical representative of Austria’s alpine communities. The alleys and streets of its medieval old town are lined with colourful houses characteristic of traditional Austrian architecture. Painted wooden window shutters and purple and white petunias adorning the façades make these buildings a lovely sight to behold.

As you walk along the cobbled streets of the centre, you’ll pass countless cafés and shops. You’ll even find boutiques selling traditional Austrian costumes. Of course, no Austrian town would be complete without quaint churches, and Kitzbühel is no exception. It has five churches and chapels, all dating from the Gothic and Baroque periods. Like every self-respecting town in Austria, Kitzbühel also features a history museum. Here you can delve into the town’s past, right back to its origins in 1,000 BC, when Bronze Age people began to mine copper in the region. 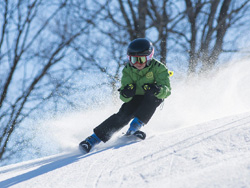 Lovely as Kitzbühel itself may be, the main reason visitors come here isn’t the town itself. Visitors flock in their thousands to experience the incredible landscapes in this area of Tyrol. In winter, you’ll find 234 km of downhill ski courses, including the infamous Streif, one of the most feared courses in the world. You don’t need to be an expert to enjoy the slopes, however. With several courses for complete beginners and 47 blue courses, less experienced skiers are sure to get their fill just as much as experts.

If you love skiing, you’ll hardly find a better place to go than Kitzbühel. In a worldwide rating of winter sports locations by online portal skiresort.info, the town has been rated as the best ski resort worldwide every single year since 2013! With one of the longest skiing seasons in Austria – lasting around 200 days from October to April – and close to 100% snow reliability, Kitzbühel won’t disappoint ski fans.

It’s in this incredible place that we offer immersive German language classes, which you can combine with skiing trips organised by our school. The school’s director is a former ski instructor, so he knows all the best slopes nearby and can help you find local tutors if you’re an inexperienced skier. When you attend a course here, you’ll be able to work on your German in the morning and have fun in the mountains in the afternoon and at the weekend. What could be better?! 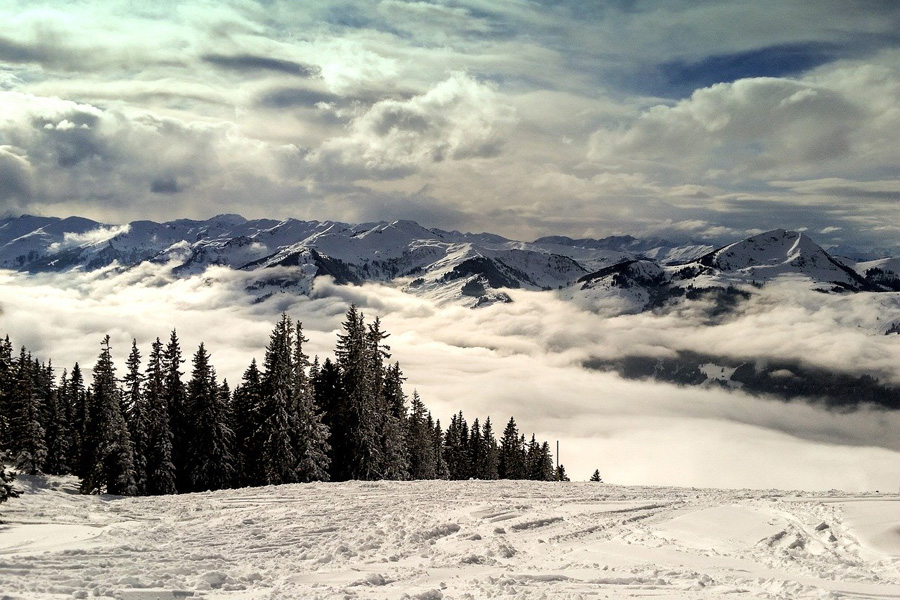 Winter fun in Kitzbühel isn’t limited to skiing, however. There’s a wide range of walking paths around the town, allowing you to enjoy hikes through magical snowy landscapes. Alternatively, you can go ice-skating on the frozen Schwarzsee lake, or try a traditional Austrian winter sport: Eisstockschießen (literally ‘ice stock sport’), the Austrian and Bavarian version of curling. You can also take a cable car across the Saukasergraben valley to reach more hiking trails. The route soars 400 m high, making it the second-highest cable car in the world in terms of distance from the ground! If you dare, you can take the glass-bottomed cabin to the top for great views of the earth far beneath you. 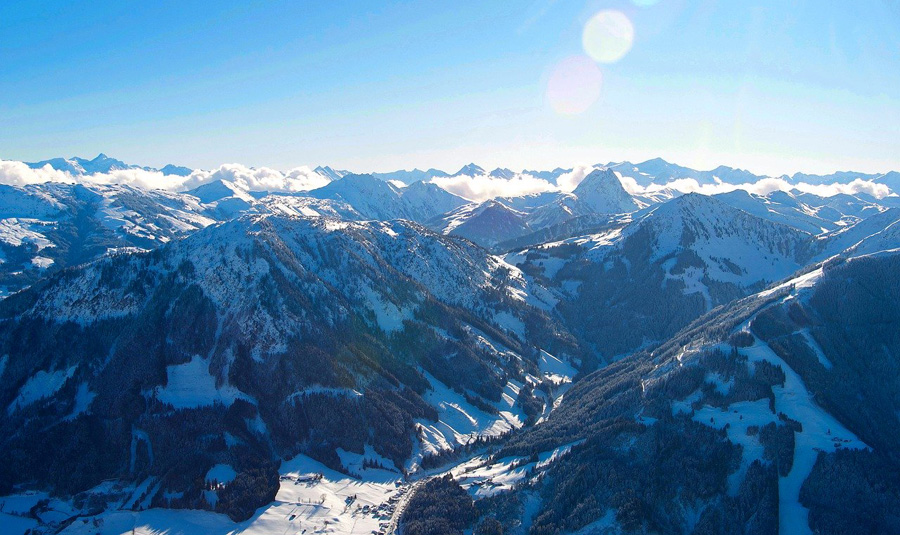 Winter isn’t the only season to enjoy the magic of Kitzbühel. In summer, you can explore this amazing landscape via 120 km of mountain bike treks and 500 km of hiking paths (and that’s just in the town’s immediate surroundings!). If you feel a little overwhelmed by this incredible choice of paths, the Kitzbüheler Horn just a few metres from the edge of town is a great place to start. Hiking up this mountain, you’ll not only be able to enjoy gorgeous views over rolling green hills, but you can also visit the alpine flower garden at the Horn’s peak. At an elevation of 1,800 m, this unique garden includes no less than 400 plants from high altitude regions all over the world. From the Alps to the Andes, from the Pyrenees to the Himalayas, this garden puts the whole world on a small Austrian mountain top. 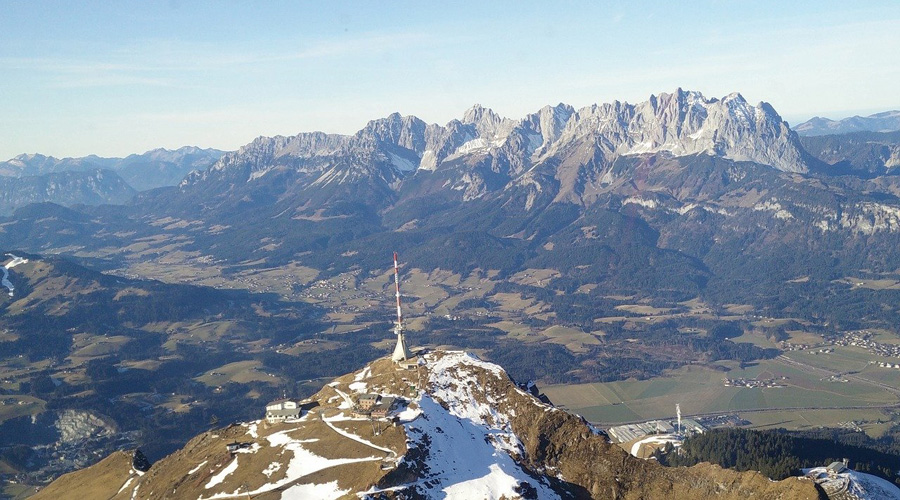 If you’re willing to travel a bit further for magnificent nature experiences, you may consider visiting the 380m-high Krimmler Wasserfälle, Europe’s highest waterfall. What starts as a gentle stream turns into a raving mass of water that rushes down the mountain like a living being trying to devour everything in its path. You’ll see myriad tiny water droplets dancing on the air, shrouding this water demon like a veil rising and falling in the breeze. In this sanctuary of wind and water, you can’t help but feel the beautiful and terrible magnificence of these ancient elements. 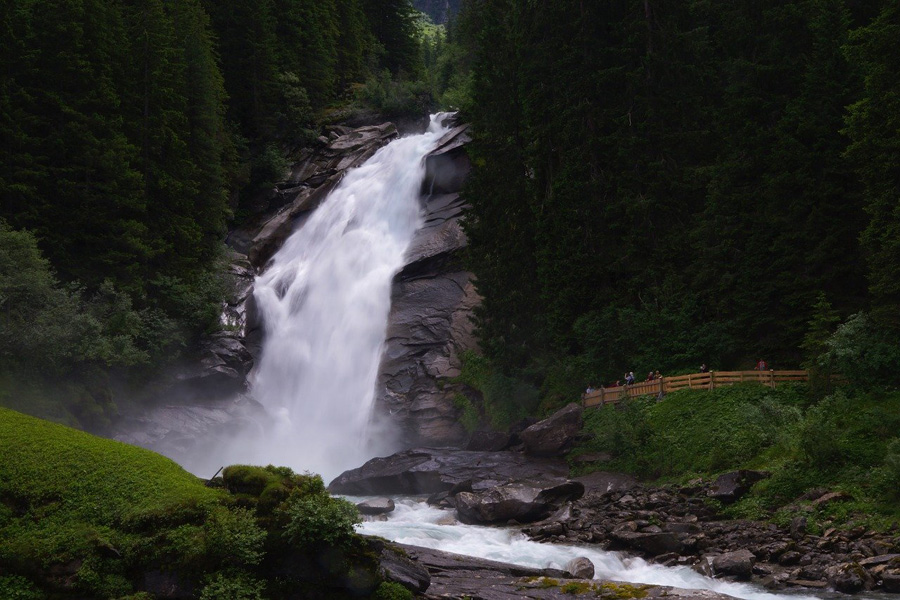 Located two hours by car from Kitzbühel but absolutely worth the trip is the Schlegeisspeicher reservoir. This artificial lake is an amazing turquoise blue colour that makes Caribbean beaches pale in comparison. It’s surrounded by majestic mountains with verdant slopes and year-round snow-capped peaks. When taking one of the many hiking paths up the mountain, you’ll catch a glimpse of the ancient Schlegeiskees glacier. You’ll also find a marvellous demonstration of engineering here, since the vast Schlegeisspeicher is contained by a giant dam. It took no less than 960,000 m3 of concrete to build this huge construction, which measures 34 metres across at its base and reaches 131 metres from bottom to top. If you have the guts, you can tackle the climbing wall on the dam’s upper section, or even brave the Giant Schlegeis Swing. No matter which option you take, you’re sure to enjoy the adrenaline rush of your life!

Another hiker’s paradise, closer to Kitzbühel and no less beautiful than the Schlegeisspeicher, are the Wilder Kaiser mountains. The name, meaning ‘Wild Emperor’, has given rise to many legends about its origin. Some ascribe the name to the shape of this rugged mountain range, which looks almost like a king’s crown. Others trace the name back to Charlemagne himself, who according to legend exclaimed when passing, “When I will long have passed away, you will still be emperor over this land!” Whatever the reason behind it, the Wilder Kaiser is indeed a majestic mountain range that lives up to the fame of its name. As an emperor among the Tyrolean mountains, it offers some of the best views and hiking paths in the region. 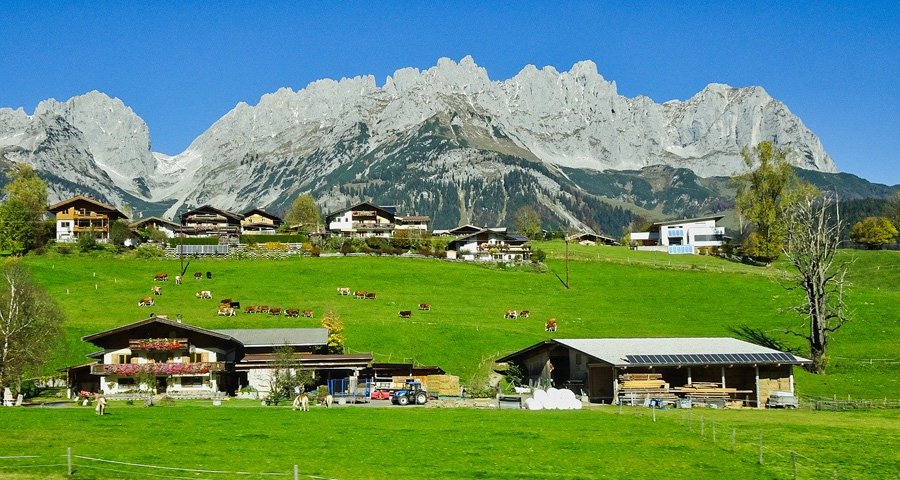 Still haven’t had enough hiking opportunities? Another popular route in the area leads you to the mountain lake Zireiner See, a true jewel in nature’s crown. Shimmering like a giant sapphire between the gentle green slopes, this lake gives you the feeling of having stepped into a pure wilderness untouched by man. High up in the mountains, the worries of life in modern society seem far away – what matters here is only the beauty of nature.

Of course, there is much more to see and to do around Kitzbühel than just hiking. A visit to Kufstein Fortress is a great way to spend a rainy day. From the deepest dungeon to the highest tower, this fortress represents the chequered history of Kufstein and Tirol as a whole. With exhibitions covering topics from daily life in a medieval castle to famous imperial infantry regiments of the 20th century, this fortress spans a period of 800 years, from the Middle Ages right through to today. It’s a must-see for every history buff and anyone who wants to gain a deeper understanding of Tirol’s fascinating past. What’s more, every day at noon this ancient fortress plays host to an amazing music show played on the world’s largest outside organ. 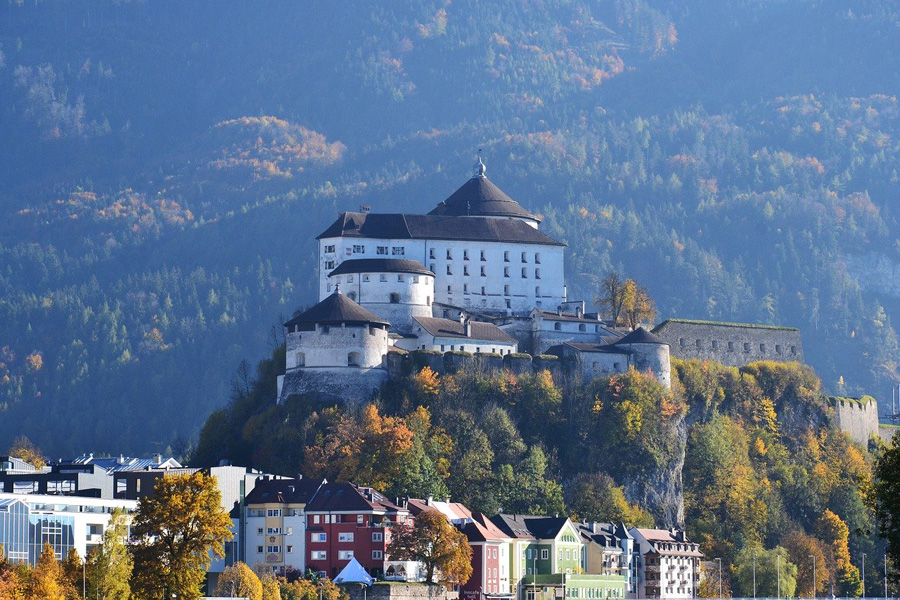 If you want to enjoy a wide range of activities, you needn’t travel out to Kufstein, however. Kitzbühel itself offers enough attractions and sports facilities to keep you busy for weeks. For example, you could visit the Aurach wildlife park and see an incredible variety of animals, such as the majestic red deer, the elegant snow owl, the fluffy yak, and even cute guinea pigs. After that, you can go for a swim in the Schwarzsee lake or – if the weather is bad – have fun indoors in the Aquarena aquatic centre. This facility boasts several swimming pools, a sauna, a Turkish bath, and a Kneipp basin. Of course, you can always play a spot of golf on one of the town’s four courses, go climbing (either indoors or in the mountains themselves), go bowling, play tennis, ride a horse, practise archery, go paragliding, or take a rafting tour. Trust me: you won’t get bored in Kitzbühel!

No matter whether you come in winter or summer, Kitzbühel is always an amazing destination for a German language course. With friendly locals and guests from around the German-speaking world, this is one of the best and most fun places to learn German. Our language school here offers immersive classes in groups of no more than six, though it’s rare for classes to reach such a ‘large’ size. Most of the time there are only one to three students in one group – you couldn’t ask for better conditions for practising your language skills, could you? Many of our students have praised our school, not only for its small classes but also for its very skilled and experienced teachers, who helped them make great progress with their German. Going skiing with your teachers and fellow students or enjoying a meal together after class will also create a great atmosphere and make your German course an unforgettable experience.

If you want to take the chance to improve your German in a splendid location, you’re most welcome to contact us – our team will be happy to make sure that you have an amazing experience!