Shut Up and Go to Vienna! 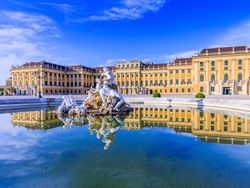 Just a week after his partner-in-crime Jo Franco visits Athens, Shut Up and Go travel-blogger Damon Dominique will be heading to another of Europe’s capital cities – Vienna – to sample some art and culture and develop his knowledge of the German language. Dubbed both the City of Music and the City of Dreams, Vienna has held the top spot for ‘most liveable city’ on Mercer’s Quality of Living survey for 9 years running!

Once capital of both the Holy Roman Empire and the sprawling Austro-Hungarian Empire, Vienna has its fair share of history – as evidenced by the wealth of architectural styles scattered across the city. Now, it is a melting pot of European society visited by almost 7 million tourists a year. With so much densely-packed grandeur, it’s a location often thought of as the preserve of the rich and pompous – however, there’s plenty to do and see for the less ‘cultured’ among us! 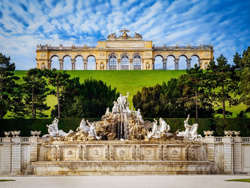 Records of settlement in the area date back almost 5,000 years, when it was home to nomadic Germanic and Celtic tribes. Several thousand years later, as the Roman Empire swept across Europe, Vienna – then named Vindobona – was a key military enclave. Complete with its own water and sewerage system, a captain’s lodge, and a hospital, Vindobona was home to 6,000 soldiers and around 20,000 citizens. Evidence of the Roman occupation can still be found here and there around the city (but the best place to view these ancient relics is the Wien Museum, on Karlsplatz).

Ruled by the Babenberg dynasty and then by the decadent Habsburgs, Vienna was for several hundred years – and, to a large extent, still is – an important cultural centre for art, science, music, and fine cuisine. As the mother of Sigmund Freud, Gustav Klimt, and Niki Lauda, of the Sachertorte and classical music and coffee-house literature, Vienna’s influence is felt throughout the modern world. Damaged at various intervals by wars and invasions, the city has every time rebuilt itself into the multi-faceted metropolis it is today, promising entertainment and education aplenty.

The city is split into 23 districts – some are mostly residential and only worth a visit if you intend to stay for a long time, while others offer a veritable smorgasbord of sights. To see them all, you may want to bike share or rent so you can get to the outer sights without spending a fortune on public transport or wearing out the soles of your shoes! 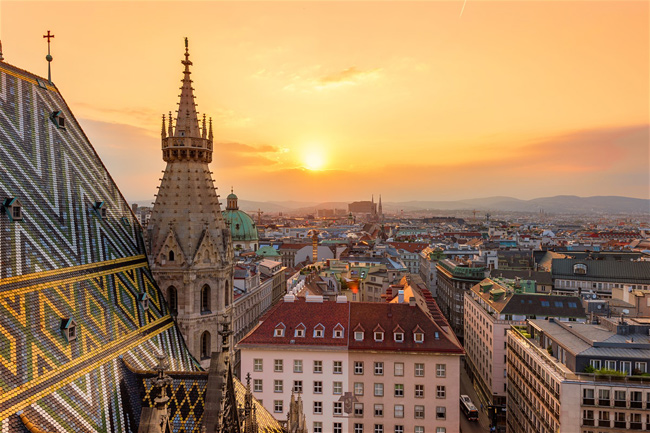 You will find most of the popular sites in Innere Stadt, the 1st district, including the Stephansdom Cathedral (above) with its ornate and colourful roof. Morbidly-minded travellers can also visit the catacombs and ossuary beneath, where the bones of some 11,000 people lie. Just ten minutes’ walk away you will find the imperial Hofburg Palace, the official seat of the President of Austria. The enormous complex houses several museums, two parks, several souvenir shops, a palm house, and the Spanish Riding School. History-buffs will enjoy St Rupert’s Church, which – though not much to look at compared to the city’s other attractions – holds the record for the oldest church in the city, having been completed in 740 CE.

Shopaholics should head to Kartner Strasse, or Mariahilfer Strasse out in the 6th district, for their retail therapy, whilst culture-vultures can walk the 60,000 square metres of exhibition space in the MuseumsQuartier. In Wieden you will find the Naschmarkt, Vienna’s largest fresh food market. This now-permanent fixture has existed since the 16th century and offers fruit, vegetables, and spices, as well as clothes and furniture in the weekend flea market. Art fans will love this area for its small galleries and craft shops, while architecture-lovers should check out the Karlsplatz Stadtbahn Station, designed by Art Nouveau virtuoso Otto Wagner. If the ornateness of the Jugendstil is not your bag, head to Landstrasse to see both the Hundertwasserhaus and KunstHausWien.

For a more alternative experience, head to Alsergrund, where you will find the Josephinum – once the Imperial Academy of Surgery and now the Museum for the History of Medicine – with its interesting and ghastly exhibits. Climb Am Kahlenberg at night and eat in the Skyline Lounge, where great views over the city are guaranteed! Out in the 16th district you can tour the Ottakringer Brewery, or sip its produce in Heuriger 10er Marie, a great example of a traditional Austrian pub. Definitely worth a visit is the Schloss Schönbrunn in Meidling – its massive 186-hectare estate has extensive gardens, housing an impressive gloriette, an orangery, a maze, various follies, and the world’s oldest zoo, which opened its doors in 1752.

This year marks the thirtieth year that our Viennese school has been teaching German to students from around the world. During his stay, Damon will be taking a course of morning private lessons with one of the school’s expert tutors. The school also offers a selection of group courses, but Damon has chosen one-to-one tuition so he can tailor his classes to his needs for a truly bespoke learning experience. He’ll also be taking part in a selection of the school’s activities planned for the week, including a guided crime-history tour, a cooking evening, and bar-hopping along the Donaukanal.

See the post below of Damon and his teacher in Vienna! 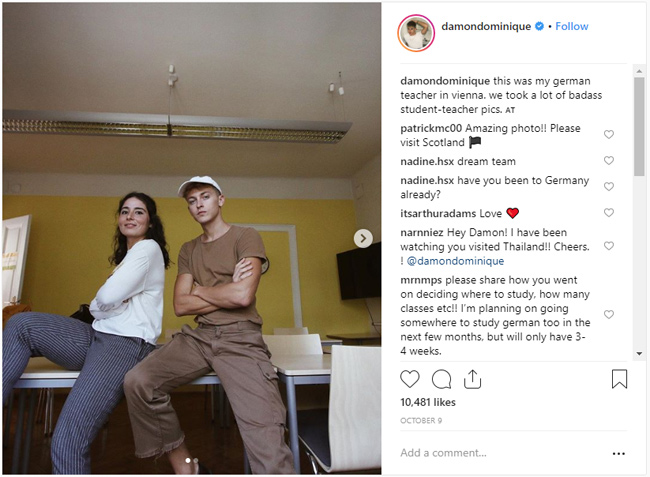 If the above has inspired you to visit the City of Dreams, don’t hesitate to contact us – we’d love to help you book your language course!

Use the sidebar icon on the map below to view all the places of interest in Vienna!