Making a difference in Maceio, Brazil 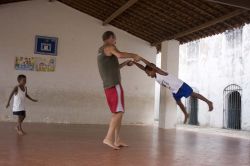 Although he originally went only to study and improve his language skills, he took part in a couple of volunteer projects, helping in a boy’s orphanage and a girl’s orphanage.

Originally asked by other volunteers to simply go and take some pictures, he had so much fun in the few hours he was with the children that he had to go back! “They’re too fun” he enthusiastically writes… 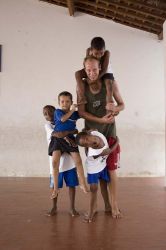 “I took a 16 week study vacation in Maceio, Brazil last year. The most fun I had during this time was working at Lar da Menina (Girl’s Home). Although I hadn’t signed up to do any volunteer work, I was still welcome to go along with the people that did. The age of the 40 or so girls that live there ranges from 5-17 years old. The activities you do there really depend on what you want to do. You can: teach small groups English, play games or simply converse with them, which I found was the most favoured amongst the girls. I strongly recommend working at Lar da Menina for anybody who wishes to improve their Portuguese. With 40 girls asking you non-stop questions, it’s hard not to pick up the language. The hardest thing about working here was saying goodbye.“

“Casa de Semanha was a great and valuable experience for me. Up to fifteen hyper charged boys aged 7-11 who love to play physical with the boys and listen to stories read by girls.  Don’t expect a minute to think while you are there while their minds understand broken Portuguese better than a lot of adults.“

If you would like to contact Steven about his experience or photographs, please let us know and we will happily put you in touch with him.