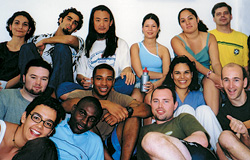 I couldn’t have chosen better than Salvador da Bahia – a city with a tropical climate, beautiful beaches, a rich cultural and historical heritage, and joyful, welcoming people living a relaxed, easygoing lifestyle. I just returned from a Portuguese language course in Salvador, and this magnificent city on Brazil’s northeast coast has everything you could imagine… and more!

The first thing that I loved about Salvador was definitely the local cuisine which is specific to the region – Salvador is a seafood-lover’s paradise! I would highly recommend the moqueca, which is a large seafood stew that comes with crab, lobster, or shrimp, as well as a wide variety of vegetables… yummm! Also, do not leave Brazil without trying acarajé. It is the name for an amazing snack that originated in Western Africa: fried black-eyed pea fritters stuffed with delicious shrimp. Nowhere else will you find such an interesting, delectable mixture of African and Brazilian culture and cuisine than Salvador!

Don’t forget to make your way over to Pelourinho, the historic and cultural center of Salvador, as you watch this charming city come alive. In Pelourinho, you can marvel at the stunning handcrafts of local merchants (and haggle with them, if you’d like – Try out your Portuguese!), enjoy a refreshing beverage at one of many pubs and restaurants in the area, or watch the amazing performances of many capoeira fighters, a form of Afro-Brazilian martial arts that incorporates dance into its fluid, acrobatic movements. It’s quite easy to spend an entire afternoon in Pelourinho, exploring the colorful colonial architecture, cobblestone streets lined with shops, restaurants, and artists, and the exciting live music that makes Pelourinho the heart of Salvador’s cultural scene.

Perhaps the best part of studying Portuguese in Salvador is that the school is just minutes from the beach, where you can spend hours tanning on the sandy beaches, swimming, sailing, diving, or even surfing! After class I found myself lounging on the school’s very own terrace, where fellow students would often gave a go at practicing their Portuguese while dancing Samba – one of the activities organized by the school. Never before in my life have I had so much fun learning a language than in Salvador da Bahia. One thing is for sure: I’m definitely going back some day!