A short and fascinating trip to Quebec City!

Being French, I have always been fascinated by Canada and its French-speaking provinces. Travelling to Toronto last summer, I took the opportunity to visit a friend in Quebec City and see it for myself. 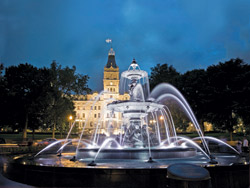 One of the most striking things for me and for anyone from France, I believe, was the accent. Quebeckers sound so exotic to me! It was really refreshing to hear different manners of speech and a whole lot of new idioms and even vocabulary. This lovely accent also makes them sound incredibly welcoming and friendly. Actually, that might not be the whole truth since they are genuinely welcoming and friendly people anyway!

Everyone I met in Quebec was very helpful and I couldn’t believe how easy it was to strike up a conversation with a complete stranger. This must be especially useful for anyone interested in studying French in Quebec! The fact that I was a total stranger in their country surely helped me in conversation, giving them something to ask me about and to be interested in, as I couldn’t say two words without my French accent giving me away. I think it was also quite funny for my friend to hear my own French slang and expressions that aren’t commonly heard when living in Quebec. The first night of my arrival we went to a local bar (where a friend of hers was working) and sampled a few local beers.

After a good night’s rest, we went to an American style diner for brunch together with another friend of hers the next morning. She was so excited I was here and truly wanted me to have the best time in her city! After a couple of delicious pancakes with maple syrup and ‘tournés crevés’ eggs, we went off to explore Quebec City. As it was already dark when I first arrived there, I hadn’t really noticed the particular features of the city and as I had been staying in Toronto for a week before, I was not surprised to find similar architecture styles and a grid street plan in my friend’s neighbourhood. After these similarities, Quebec City unveiled a whole new atmosphere as we arrived in front of the city fortifications. 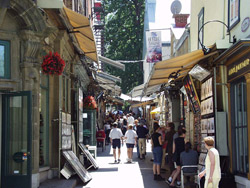 The historic quarter of the city – the Old Town – takes you right back to the 17th century and is a remarkable reminder of Quebec’s European roots. We took a picturesque cobbled street up to the top of the hill to admire the Frontenac Castle. Former residence of the British colonial governors of Quebec, this impressive grand hotel towers over the entire city, as well as over the St Lawrence River. We strolled along the Terrasse Dufferin promenade, an old wooden boardwalk offering stunning views of the river, with Orleans Island in the distance.

At the end of the impressive promenade, you enter a very unique place – the Plains of Abraham. It was like no other park I had seen before! This vast stretch of land is a tranquil and serene haven, right at the centre of a bustling, cosmopolitan city. What is unique about it is that at the entrance of the park you feel like you are on top of the world, both literally and figuratively.

In the distance and all around you, only clear skies can be seen! About halfway through the park, you can also enjoy an unobstructed view over Quebec City. My friend told me that the Plains of Abraham hosted one of the major stages of the world-known Quebec City Summer Festival (it’s definitely going on my bucket list!).

I now had at least one last landmark to see: the Parliament. Located on the Parliament hill as well, it is definitely worth a visit for any history and architecture lovers! In front of this imposing 19th century structure lays a lovely square, a great place to relax after a long, crisp stroll.
The next day, my friend took me to the Montmorency Falls Park, a short bus ride away from her place. The weather was not as good this day, but the falls were not any less impressive! After this we decided to visit the public aquarium of Quebec City and it was great fun too, definitely worth a try if you’re fond of polar bears, seals and cephalopods!

That night we decided to stay in due to the rain and friend thought it was time for me to try a Canadian speciality – made with fries, brown sauce and cheese curds – (cheesy chips with gravy) and called Poutine. It may not be the most refined dish ever made, but it’s actually really tasty!

My short trip to Quebec City was already drawing to a close, so I decided to make the most of my last day in this incredible and historic city! We visited the Museum of Civilization and the permanent exhibit gave me a well needed catch-up on Canadian history. The other exhibition at the time retraced the history of video games and consoles. Reliving our childhood, we had great fun playing all sorts of games, from Street Fighter to the latest Mario Kart!

I had just a couple of hours left before hopping on the return train to Toronto. Heading to the train station, we passed by the Old Port farmer’s market and couldn’t help but visit the stands that sold incredibly tempting fresh vegetables and fruits, maple syrup products and various arts and crafts. With a pack of maple tea in my bag and an irresistible feeling of nostalgia, I bid Quebec City and my friend goodbye, promising myself I would have to come back one day.