A Night Out in….. Shanghai! 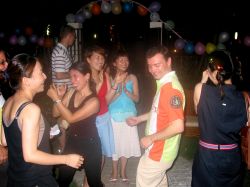 The first thing that strikes you when you are out and about at night is the prices of the drinks. If you go to a club or bar in Shanghai, you pay around 50 RMB for a beer (approximately 5 euros), which is not bad at all!

Karaoke is huge in Asia, so don’t forget to try it whilst you’re in Shanghai! There are lots of karoke bars (KTV bars) in Shanghai. One night I decided, together with some of the other students from the Chinese school in Shanghai, to go to a KTV bar in Xu Jia Hui, a modern area in the Xu Hui district. This is a huge district with a lot of stores and shopping malls.

We went to a very nice bar which is part of a well-known KTV-chain in China called Haoledi.

They have a large range of songs in different languages, so you would certainly find a song you like. We certainly did! After a couple of Tsingtao beers, we headed off, hoarse voiced to the old French Concession area. The French Concession area is great. It was the area in Shanghai where the French lived under the British. You’ll find lots of beautiful old French buildings, nice bars, restaurants and clubs. I really recommend a bar/disco called Zapatas, which is located on Hengshan Road. It has a nice ambiance with 90s music.

Towards the end of the night, we ended up in a small nightclub called Guandii on Gaolan Road, inside the Fuxing Park.

If you like commercial Hip Hop and R&B music, you’ll love this club, which is owned by two famous Chinese actors. It really is worth the entrance fee (approximately 60 RMB).

Other areas in Shanghai I recommend for clubbing are:

Huai Hai Zhong Road: This is a very commercial road with lots of stores, restaurants, shopping malls and…..nightclubs! Nice clubs I visited in this area were:

People’s Square/Nanjing Road area: This area is in the heart of Shanghai, the most crowded area with lots of places to go out. Some places I visited were:

I certainly can say Shanghai is a great city for clubbing. The city offers a wide range of places to go out – enjoy!