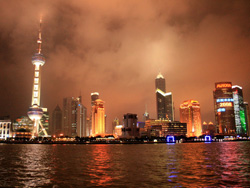 When I arrived in Shanghai last year the first thing I noticed was a huge Ferris wheel somewhere in PuDong. It was higher than some surrounding skyscrapers! The next thing were the confusing motorways as my driver took me from one end of Shanghai to the other. It took us two hours to reach my accommodation.

Shanghai, although huge, is not too confusing once you get used to it. However, my first day running errands there was not the easiest thing I’ve ever done! Luckily I met a Chinese guy who helped me find my way to where I had to be. After that I understood the city’s structure and it was a piece of cake (but never left the house without a map, just in case). The city has so much to offer that it’s difficult to grasp it in the short time I spent there, especially since I was working and not on holiday!

Here are my highlights – the things I believe you definitely should do while you’re there: 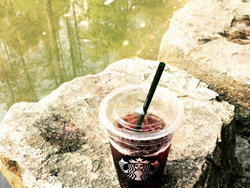 Take a walk through People’s Park on People’s Square (an underground station ends there). On the weekend you’ll see people selling strange paintings and I never figured out what they mean. I liked to sit with an iced tea at the pond and watch the people passing by, going about their Sunday!

Another highlight for me is the Bund which belonged to the old French area in Shanghai at the shores of the HuangPu River. You can see still the remain of this French history within the buildings. You can walk along the banks and enjoy the view of the highest skyscraper (the Bottle Opener) and the rest of the PuDong skyline. The Bund is a good place to take photos! As a tall, blonde, European girl I probably “photobombed” a couple of family portraits involuntarily. 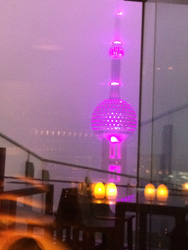 If you’re enjoying going out with friends, colleagues or fellow students than the Bund is a good place to start. There is one particularly impressive hotel with a rooftop bar. Here you have a great view over to PuDong, especially when all the skyscrapers are illuminated. The hotel and bar is called INDIGO. A little further down the road you’ll find the Waldorf Astoria – used for filming Daniel Craig in James Bond. Here you find several bars over several floors. So you’re sorted for the night right there! Taxis in Shanghai are relatively cheap and you can ask the hotels to order you one in order to get around. 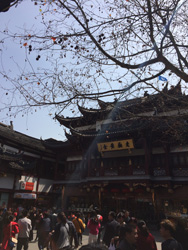 Further in to “old” Shanghai (as I like to call it, as for me the PuDong side is the new one) you must walk through the little that is left of the old town, the traditional houses, the impressive coy ponds and the old tea house. There is also a typical Chinese garden that is worth visiting. Be aware of hundreds of tourists and people trying to sell you expensive gifts for your loved ones.

Your next stop would be the Jade Buddha Temple where you can see two Buddha statues, each made of one block of jade. One shows Buddha in a sitting position and the other is the reclining (passing away peacefully) Buddha. You will no doubt see some Buddhists performing their rituals there. As someone studying the philosophy of Buddhism this seemed a little strange at first, but I got used to it. There is another Buddhist Temple which is the largest in all Shanghai and till today a fully functioning monastery. It’s called the Jing’An Temple and it is very huge! I just passed it with a taxi once but never made it inside. So, if you’ve the opportunity than you should definitely go.

Back to the Bund

After you’ve seen all those places I’d suggest getting back to the Bund to take an underwater tram to PuDong, or another taxi. The ride with this tram is an extra highlight because they illuminate the tunnel using a laser show. It’s ideal for children but maybe not everyone’s cup of tea if you want to just get across the river. You arrive on the other side of the river directly beneath the Shanghai tower (the one with the three balls that looks a bit like the Berlin TV Tower!) You can go inside if you want and also have some food there. But I prefer to be on the other side of the roundabout – the side with the HSBC tower.

The HSBC tower houses not just a luxury shopping mall but also the Ritz Carlton. You’re probably thinking: Wow the Ritz! Expensive, but you can always afford a drink there… the best tea in town and even a lovely set of biscuits to go with it. If you’re lucky you can sit on the outside terrace (it’s on the 52nd floor) or in the rare window seats and enjoy your drink with an incredible view.

Next to the HSBC-building you have another shopping mall where you can find different restaurants from Korean to Italian and even an American kitchen. So, if you’re craving some food after running around in Shanghai that’s probably the place to go. If it’s coffee you need then there seems to be a Starbucks around every corner in Shanghai!

Come and take a language course in Shanghai with us and explore the fascinating city for yourself! 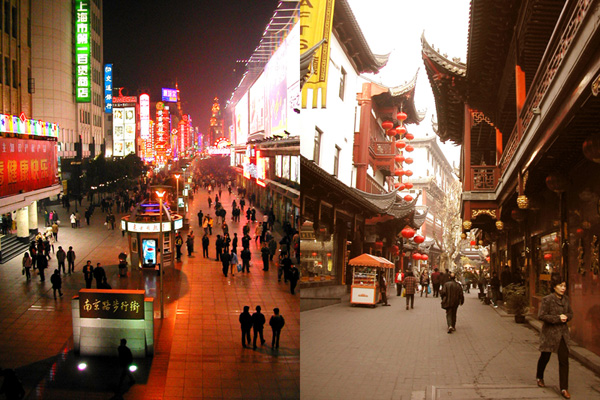