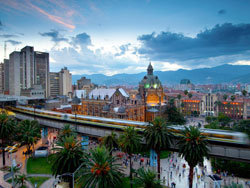 Colombia has always combined the best bits of South America in one stunning country. As a visitor, you will be spoiled by its riches. You can trek through parts of the Amazon rainforest or visit Colombia’s spectacular national parks, which remain largely untouched by humans. Or why not trying hiking in the northern Andes and admire the epic mountain views? If you prefer the beach, Colombia has some of the most serene and diverse coastlines in the world.

Or, if you’re an urbanophile at heart, travel to the main Colombian cities to admire their colonial architecture and their contemporary art. History buffs can delve into the country’s pre-Columbian history in its unique and mesmerising museums, and learn more about the roots of its fascinating culture. 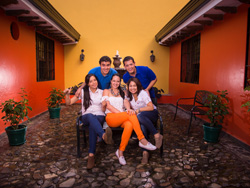 If that wasn’t enough, Colombian Spanish is recognised as the clearest form of the language in the world! It’s therefore the perfect place for anybody who wants to learn Spanish. With all its culture, sights, and landscapes, Colombia offers one of the best travel experiences to be found anywhere. This is especially true for people who love the outdoors: hiking, trekking, swimming, diving, snorkelling, and sightseeing can all be enjoyed here. Every corner of this fascinating country has a story to tell, and you should listen!

Venture inland – away from the sandy, tranquil beaches and the up-and-coming surfing hotspots – and you will find Colombia’s second-biggest city: Medellín. Medellín gives you access to many of Colombia’s treasures, whilst being an innovative and entrepreneurial metropolitan city, surrounded by incredible nature.

History and influence of Medellín 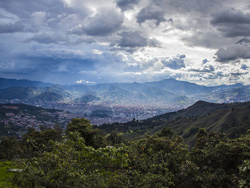 Back in the 17th century, there were no more than 3,000 people scattered around the hills of Medellín. A later census during colonial times showed that the population had risen to over 14,000. Colombia won independence in 1810 and, by then, there were over 15,000 inhabitants.

The 20th century saw the population soar from under 60,000 to over 350,000. The export of coffee was a large driving factor for this incredible growth. In fact, it was one of the country’s main exports. This trade helped to further increase the city’s growth.

Sadly, it wasn’t just coffee that became a popular export for Medellín. The city was infamous in the 1980s for the Medellín Cartel, founded by Pablo Escobar. The violent wars between the city’s cartels terrorised the whole area and the city fell victim to a very high crime rate. This dropped dramatically straight after the death of Escobar in 1993, which released the city from drug-related warfare. In fact, Medellín today is safer than many major cities in the U.S.A. and has certainly moved on from its dangerous past – so much so that it was awarded the Lee Kuan Yew World City Prize for innovation and livability in 2016!

This part of history will no doubt stick with Medellín for several decades to come; there are even ‘Pablo Escobar tours’ around the city for you to take part in. However, the tourist board and many of the citizens of Medellín are keen not to promote or encourage this form of tourism. At any rate, there are plenty more interesting things to see and do in this award-winning metropolis.

Let’s go over just a few of these …

Medellín offers a whole host of architecture for you to discover. If you like to visit churches, then you are in the right place! As a city that was established under a Catholic empire, Medellín has around 70 churches, so you will surely find one or two that will appeal to you.

One of the most stunning examples of religious architecture is the Iglesia Nuestra Señora del Rosario in Bello. This relatively young church (built in 1947) is a prime example of Neo-Byzantine style. The interior shines bright white, and this huge church is packed with remarkable works of art. The detailed stained-glass windows are mesmerising, as is the attention to detail throughout the building. If you have time to see just one church in Medellín, this is surely the right choice!

If you have a little extra time, take a trip to the oldest church in the city, La Candelaria. This white building dates back to the 17th century and is one of the only remaining examples of authentic colonial architecture. It is also home to a wonderful painting of the Virgin of Candelaria, the patron saint of Medellín. This can be found right above the church’s ornate wooden altar. 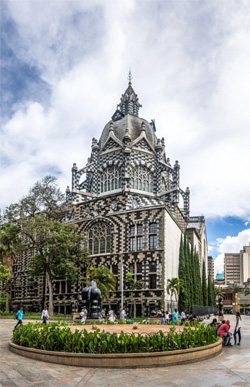 If you’re a ‘culture vulture’, you can start your tour of the city at Berrio Park. It is found right in the centre of Medellín and is therefore in close proximity to many key sights. The park itself has a plaza with a statue of the eponymous Pedro Justus Berrio. This plaza is illuminated by lanterns after dark, which gives it a rather eerie atmosphere. Nonetheless, this is the meetup point for many locals, so you will always see Colombian life in flux at this central part of the city.

Close to the Berrio Park is a truly unique building: the Rafael Uribe Uribe Palace of Culture. This huge black-and-white palace plays host to regular cultural events, from concerts and conferences to exhibitions. It is considered a National Monument of Colombia and has a special entrance for the public. Go and check out the historical and photographic archive, the sound and music archive, the permanent art gallery, the library, and the small café. The Palace is the ideal place for you to get in touch with all aspects of Medellín, since it’s the main artery of the city’s culture.

A post shared by Medellin Antioquia Colombia 🇨🇴 (@medellindestination) on Dec 23, 2017 at 9:53am PST

Also near Berrio Park is the Museum of Antioquia. This art museum houses works by the Colombian artist Fernando Botero. There are also rooms with a variety of themes, such as the pre-colonisation room, the colonisation room, the sculptures room, and the contemporary art room. It’s the perfect place to see how local art has changed over the last few centuries. 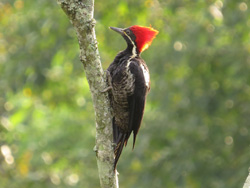 As a testament to the variety of nature in Colombia, Birdlife International ranks it first for the most species of bird of any country in the world! Colombia has, remarkably, more known bird species than the whole of Indonesia and even more than its vast neighbour, Brazil.

Medellín’s location at one end of the Andes also makes it the perfect location to trek and hike. Go there and enjoy the tropical nature of the region. Parks and trails offer exploration of the rainforest in combination with the challenge of a great hike. While you will likely meet people along the way, this is the perfect place to escape the entrepreneurial bustle of Medellín.

In the northeast of the city you will find Arví Park, a nature reserve and archaeological site. At 16,000 hectares, with around 1,800 hectares given over to rainforest, this place is massive! All the trails combined here total 54 kilometres – more than enough to keep you busy. Besides hiking, you can also take a nature tour – exploring the wild and discovering the park’s famous wildflowers and butterflies – go cycling, and even take part in outside sports.

Arví Park offers something for everyone. If you don’t want to hike too much, you can explore via the metro cable system. Most attractions are linked with these cable cars and are easily accessible, as is the whole park in general. You can reach it by metro from Medellín, which will bring you directly to the Arví station, located only 25 minutes from the park. 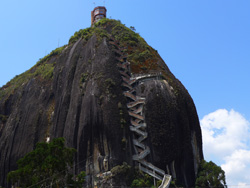 Guatape is a resort town near Medellín known for its vibrantly coloured houses. In fact, people say it’s the most colourful place in all of Colombia!

Here you can visit La Piedra, a gigantic rock – or inselberg, to be precise. 649 steps wind their way up this unusual rock; if can manage the climb, you’ll be rewarded with an awesome view of Guatape and the surrounding region. The panorama is definitely instagramable! Besides this, the town has a selection of lovely churches, as well as a History Museum. Here you can learn more about the area, its history, its culture, and the gorgeous nature surrounding the town. There are many local tours operating in this stunning place that you really should take advantage of.

This park is ideal if you just can’t get enough of Colombia’s incredible natural beauty. It is also easily accessible, so is a great option for a day trip. Travel for around 25 minutes on Medellín’s metro and a further 20 minutes by bus, and you’re there! Here you’ll be rewarded with, again, great walking trails and the parks’ raw nature. You can follow the river – which is deep enough to swim in at some spots – right into the lush green forest. If it’s action and adventure you’re looking for, the park has an excellent zip-line over the treetops.

Foodies needn’t worry – besides a restaurant serving typical Colombian cuisine, you can buy the ingredients for a traditional soup called Sancocho. You’ll be equipped with a kettle, meat, and vegetables like corn, yucca, potatoes and carrots, so you can make your very own meal on-site. What’s better than enjoying a self-made local dish whilst surrounded by the wonders of nature?!

Speaking of food, Colombia’s cuisine – and particularly that of Medellín – is an experience all by itself. Before we dive into the different dishes, a word of reassurance: the tap water in Colombia is very pure, and definitely safe to drink. Despite what you may have heard, you can take a big sip of cold tap water to help with the heat of the Colombian sun! 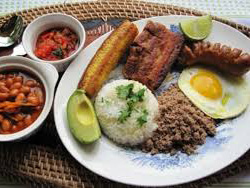 In terms of variety, the best start in the world of food is probably bandeja paisa. This dish is a classic, especially for the Antioquia region. It consists of red beans cooked with pork, minced meat, white rice, fried egg, plantain, avocado, lime, and blood sausages. If you want to get an impression of what Colombian cuisine has on offer, this is a great dish to try. There are often variations to the recipe; it can also be served with arepas (a fluffy pancake made from maize dough) or chorizo, a popular spicy Spanish sausage.

If this isn’t adventurous or extraordinary enough for you, you should definitely try mondongo soup. The Antioquia version of this dish contains tripe and slow-cooked vegetables like peas, carrots, and onion. It’s usually served with rice, ground meat, bananas, avocado, and, again, arepas. This is one of the most typically Colombian dishes, so you should be sure to sample it if you’re looking for an authentic food experience. Many restaurants in Medellín serve mondongo soup, and the staff at our Spanish school will be happy to point you in the right direction if you’re unsure.

As mentioned above, Colombia is well-known for its coffee, so it would be a shame to miss out on that during your time here! You can go on specific coffee tours or just head into any café and try a original blend made from fresh Antioquia beans. 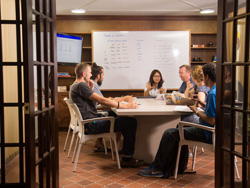 If this has made you curious about visiting Medellín to learn Spanish, be sure to check out our website! You will find extra information on the courses and accommodation options on offer.

Please also feel free to contact us and see how we can help you arrange a course in this stunning part of the world.