Oxford – A great place for studying and shopping! 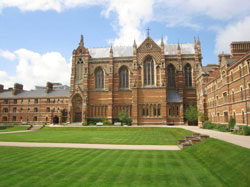 I always wanted to visit this famous University town and last month I was finally able to go there.  Like we all do, the first thing I did when arriving in Oxford was to drop my luggage at the hotel. I stayed at the Randolph, which was an experience on its own because of its neo-Gothic style. The detective fans among us might know that this hotel is famous for the inspector Morse scenes that have been filmed in the hotels’ bar. The bar with the very original name 😉 ‘Morse bar’, is often visited by tourists to have a drink or just take some photos and then leave again.

I knew that Oxford is known for its University and colleges, but it was a positive surprise that it is also very good for shopping too! You can find many high street shops and department stores, but for a different shopping trip you should definitely visit the covered market, with many specialist shops, food markets, some hairdressers and small vintage boutiques. It was noteworthy that there were a lot of tourists and international students in the shopping areas. It wasn’t comparable to London’s Oxford Street, but the shopping streets of Oxford itself are certainly popular among tourists as well. 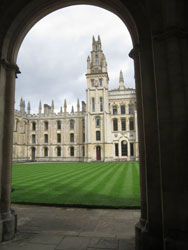 Another remarkable fact of Oxford is that you find many bicycles on the streets, even as a Dutch person, I was surprised about the amount of cyclists and bicycles you get to see in Oxford. After a nice city stroll I was able to visit the Ashmolean – the world’s first public museum which was recently re-opened by the Queen. There are many other museums in the city, but the Ashmolean was so large that you can easily spend two days in there!

On my second day we did a walking tour through the city, which was very interesting because everything about the colleges and University was explained really well to us. There are 38 autonomous colleges, which together form a federation making up the University of Oxford. The University is a unique and historic institution, the oldest university in the English-speaking world. Another interesting fact; the first colleges of Oxford were built in the 13th century, but it wasn’t until 1878 that women were admitted to the university! Luckily, all colleges are now opened for women.

We also got to see some of the gardens and churches of the colleges. This was very interesting because I didn’t knew the colleges were this well equipped. Some students were busy with studying in the peaceful gardens; it seemed to me to be the perfect learning environment. We also saw the Bodleian library, the typical Bridge of Sighs and the Dining Hall in Christ Church College which was the inspiration for the set design of Hogwarts Great Hall – the staircase leading up to the hall was actually used in several scenes in the films (Harry Potter)! 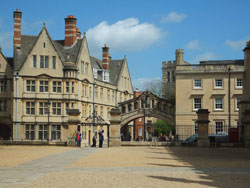 If you enjoy nature you could take a break from the city life and visit the botanic gardens or do some punting along the River Cherwell, where you can try to find that particular patch of grass along the river called Parson’s Pleasure, where dons used to bathe naked and women were expressly forbidden.

If you start feeling hungry after a day with lots of new impressions of Oxford I would recommend George Street for some food and drinks, this is a cosy street with many restaurants and pubs, to suit all tastes.

I loved my visit to Oxford and being able to have a peek at the famous student life there by visiting some of the world famous colleges. The overall image I have of Oxford is a relaxed and peaceful atmosphere, a city with beautiful architecture that you never get bored of; I would definitely recommend this city to students who want to come to learn English! Apple Languages offers summer English language courses in Oxford to students aged 10-15 and also year round courses to students aged 16 years and above.