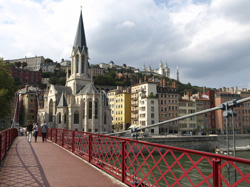 After considering both Lyon and Paris, I chose to study in Lyon. This was because I was planning to spend several months in France, and I wanted to be in a big city, but I felt that in Lyon I would have more opportunity to speak French and experience real French culture than in Paris.

What I discovered was that Lyon has so much more to offer than this! Beautiful Lyon lies on three rivers. The masculine Rhône and the feminine Saône divide the city into distinct districts.

Fourvière, or the ‘hill that worships’, offers arguably the best views over the city, and is crowned by a magnificent basilica.

Seated at the foot of Fourvière is the city’s historic old town, and my favourite area of Lyon! Packed full of some of the best ‘bouchons’ (typical Lyonnais restaurants), the old town is also home to the famous ‘traboules’, which are fantastic, secret passage ways that all visitors to Lyon should explore!

To the west of Fourvière lies La Croix-Rousse, or the ‘hill that works’, which was once home to Lyon’s many silk workers. Nestled between the Rhône and Saône, the Presqu’île is the city’s best shopping district, where you will find high street shops, designer brands, traditional French cafes and fabulous restaurants right next to each other!

What I really loved about Lyon is that it really does offer something for everyone! Whether you are interested in culture, spectacular architecture, a vibrant nightlife, or meeting friendly locals who will encourage you to practice your French with them, Lyon has it all! Oh, and the third river? The delicious Beaujolais wine produced just north of the city!