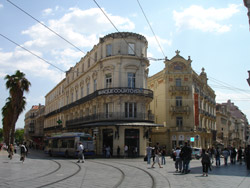 Montpellier is one of the most beautiful and fastest growing cities in France. With a unique energy, the city offers an incomparable student life and has large young population who provide the capital of Languedoc region in the south of France with a vibrant, youthful feeling.

Situated on the Mediterranean coast, Montpellier is the 8th most populated city of France and keeps attracting more and more people thanks to its relaxed southern atmosphere, its thirst for culture and its festive mood. This French Riviera city has enough to make any European city envious: golden sandy beaches just 6 miles away, 300 days of the sun per year, a buzzing nightlife, outstanding history and architecture are just some examples of what you will experience there. It is not by chance that the New York Times nominated Montpellier in 2012 as one of the top 45 places to visit worldwide!

Millennium city, “La surdouée” (the exceptionally gifted) is home to the oldest – and still active! – medicine university of Europe. The most prestigious architects have left their footprints all around the city: the city owes its neoclassic neighbourhood Antigone to Ricardo Bofill and its new town hall to Jean Nouvel.

Montpellier has managed to combine the facilities of a big city with the sweetness of Mediterranean with the largest pedestrian city centre of France, medieval back alleys, private mansions of the 17th and 18th centuries, perfumed outdoor markets and much more!

The following suggestions, from a French resident, are what to cram in if you just have one day available in Montpellier! Of course, if you are studying on a French course with us, minimum one week, then you will not have to see everything in one day!

Start your day with a breakfast on the Place de la Comédie (Comedy square), a few metres away from the station, and enjoy the first rays of the sun. Biggest square of the city, the scenery is absolutely charming: pedestrian square full of cafés and restaurants.

Head off for a stroll in the city centre through the Rue de la Loge (Lodge Street), where the word “roaming” eventually makes sense. You will end up in front of the Arc de Triomphe (no worries, we are still talking about Montpellier!), a monument built in 1691 and the only way to get to the Peyrou, a square especially dedicated to King Louis XIV where you will have the chance the enjoy a magnificent panorama of the city.

It is now time to visit the old city centre, located close to the Rue de la Loge, where you can contemplate Saint-Roch and Saint-Côme squares as well as the impressive Saint-Roch’s church. It’s a truly excellent place to live where you will find numerous wine bars and cellars, whilst the city also has its own wine festival called “La fête de la Vigne”, representative of the old centre’s mentality. This event usually takes place at the end of July and aims at revealing the talent of young wine-growers from the region.

If you have managed to squeeze all of that in then you will no doubt be very hungry! Have your lunch break in the modern neighbourhood of Odysseum, full of restaurants where you will taste local Mediterranean specialties. After the help of an aperitif, why not go to the bowling, karting track, laser game, planetarium or aquarium?

In the middle of the afternoon, we now suggest you take a visit to the Lunaret zoo, with its tropical greenhouse, unique in Europe.

Before “l’apéro” (a traditional moment in France before dinner where people have a few drinks), visit the lively Fabre museum, which often hangs paintings from famous artists such as Courbet and Goya.

Here we are, time to let off steam and enjoy a traditional apéro in one of the city’s squares, where in the summer, some 30,000 Montpellérains (inhabitants of Montpellier) gather every Friday, this is not only allowed but organised by the town hall itself! This represents the perfect opportunity to be “undercover” and meet these welcoming people, with whom you might just want to discover the vibrant nightlife with later on.

If you are passionate about sports, then you’ve made the right choice: Montpellier is certainly the most competitive city of France in terms of sports. With teams in each of the best national leagues, from handball, football and volleyball to rugby, water polo and basketball, there is always a match going on around the city! Do you want to try a very local sport? Then you might want to challenge the best Pétanque players of Mediterranean, but be careful, even though they don’t look impressive, you might find it hard to get to grips with that technical (but not so physical) sport.

Each year, Montpellier hosts the FISE, the international festival of extreme sports, where 400,000 spectators squeeze in the Rive du Lez (Lez shore) to watch amateurs and professionals riding their BMX, skateboards, rollerskates, scooters and many more extreme sports. This festival is free and has a very festive atmosphere.

If you are in to festivals/events, then the Park & Suites Arena is an indoor arena with a seating capacity of 15,000 spectators. World class performers such as David Guetta, Kanye West and Kylie Minogue have already had a show in Montpellier!

As you certainly will understand, when reading these examples of what to do in Montpellier, it is a city, that although not quite as famous as it should be on the international scene, it always provides a huge host of things to do and see, which will more than meet anyone’s expectations!