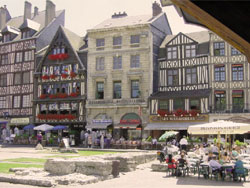 Rouen, the capital of Normandy, is most notable for being the place where Joan of Arc was burnt at the stake! However, the city has so much more to offer than medieval history.

In 2013, Rouen celebrated the 25th anniversary of the Armada and millions of visitors to come and admire the 50 ships sailing from all over the world. People had the amazing opportunity to get onboard several of these ships and have a tour around them. The festivities also included fireworks as well as free concerts of French and international artists such as Mika!

Whether you are into sports, history or shopping, Rouen certainly has something in store for you! The city has two shopping centres, one on each side of the river Seine. In the South, you will find the Centre Commercial Saint-Sever which hosts most of the high-street brands whereas in the North, Les Docks 76 offers less common shops and boutiques.

Football, volleyball, basketball: you can see it all in Rouen – mostly at the brand new Kindarena – but I would particularly recommend going to a hockey match. Indeed, also in 2013, the Dragons –as the local team is called- won the National Hockey League Championship for the fourth time in a row! In 2012, they were also the first French team to ever win the Continental Cup. 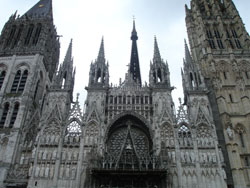 The historic centre of the city has some of the most interesting sights to offer. Walk down the Rue du Gros-Horloge to the Cathédrale Notre-Dame, which you might recognise from the 30 pictures Claude Monet painted of the Cathedral. Not far from there stands the Palais de Justice. If you look closely, you will see the many bullet holes on the façade of the building, which was partly restored after World War II.

You can also follow in the footsteps of Madame Bovary by going to the Théâtre des Arts. The theatre is host to the Orchestra of Rouen, which has been performing there for 15 years. The theatre also offers a variety of shows, ballets and operas for a very reasonable price so as to rid opera of its posh reputation.

If you happen to visit Rouen between mid-October and mid-November, you will be just in time for the Foire Saint-Romain –the city’s annual fair. This is the oldest and second biggest fair in France, so it is definitely a must-see.

Le Zénith and Le 106 are the two major music venues in Rouen. Le Zénith often offers concerts of the greatest French and international artists, while Le 106 receives the less famous, but just as good, acts.

You will also be able to visit some of the numerous traditional markets and beautiful gardens the city has to offer.

Our school in Rouen is situated only metres away from the Jardin des Plantes, which is an 8-hectare botanical garden. There, you will have the opportunity to admire 5600 plant taxa as well as animals such as budgerigars, parrots, pheasants and more! The garden notably offers free entrance to the general public, so it would be the perfect place to relax after classes!