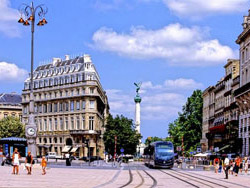 At the crossroads of the Atlantic Ocean and the Garonne River, Bordeaux is a charming port city situated in the south west of France. Capital of the Aquitaine region, “La Perle d’Aquitaine” (The Pearl of Aquitaine) is the ninth largest city of France with a population of 240,000 inhabitants.

The founding of Bordeaux dates back to the fifth century B.C, when some vineyards already started to spring up! Burdigala, as it used to be called, experienced a significant development thanks to its port, whilst some of the the ancient city constructions and remains are still visible today. Don’t be surprised if Bordeaux seems to have a certain “English flair” – the city was actually ruled by the English for a long time!

After WW2, Jacques Chaban-Delmas, the city’s mayor undertook spectacular renovation work throughout the second half of the twentieth century which turned Bordeaux into a truly glamorous city.

No need to question this success; in 2013, Bordeaux was elected as the 2nd most preferred city by the French themselves! Bordeaux is obviously famous worldwide thanks to its wine, arguably regarded as one of the finest quality wines in the world. The secret lies in a very local “savoir faire” (know-how) and a perfectly adapted climate, making Bordeaux the second largest wine-growing region in the world, producing over 800 million bottles annually. Wine amateurs will be delighted to visit one of the numerous wine cellars, where they will of course be able to participate in some unforgettable wine tasting.

Although visiting the city’s vineyards are unquestionably one of Bordeaux’s main attractions, the capital of Aquitaine has many more assets to show:

Les Bordelais (inhabitants of Bordeaux) are used to the healthy, outdoor lifestyle; the city offers a hundred miles of cycling paths for residents to navigate around what people call the Petit Paris (small Paris) and its surroundings. Exploring the city centre by foot is very convenient and pleasant and Bordeaux also has numerous options for public transports: bus, trams, bike shares, even a river shuttle service all make the city very accessible to everybody.

If you decide to walk, you should start your journey with a stroll alongside the former wet docks; recently renovated, the place offers a dramatic frame for feeling the tranquillity of the city: full of pedestrians, bicycles, skaters and roller-skate enthusiasts. Les Bordelais regard this place as a meeting point where everyone is welcome to share a pick-nick and a glass of vin rouge. As soon as the sun comes out (luckily this happens quite often, given that the city enjoys 2000 hours of sun per year in average), come and join a game with the locals in an outdoor football court or dive in the sand of a beach volley ball pitch.

If you have the chance to pass by the city in June, going to the “épicuriales” is a must. This major event in Bordeaux has genuinely become a reference within the European gourmet events: the Place Tourny hosts the event every year where numerous bars align their own sort of restaurant on their terraces, offering delicious delicacies. You will definitely feel the vibrant atmosphere of this open-air celebration, typical of the south of France!

Another traditional French festival takes place every year throughout France, “La fête de la musique” on the 21st of June. Don’t hesitate to go out on the streets and experience a friendly and festive mood where a combination of amateur and professional music bands and singers freely showcase their performances.

“Hangar Darwin”, a place forgotten by too many tourists, is home to an entire ecosystem; built to respond to an increasing demand from street artists and riders to have their own space where they can freely express and practice their arts. The “Hangar Darwin” is settled in a vast area where diverse projects coexist: a dynamic economic creative hub, a sustainable energy centre, fairtrade shops and a skate park. You can also intend an urban culture day, a skating competition or a garage sale!

Still on your menu of indoor activities, some museums in the city are worth visiting: the CAPC which is the centre of contemporary visual arts, the Musée d’Aquitaine (museum of the Aquitaine region) which attracts 150,000 visitors per year, and the Musée des arts décoratifs (Museum of decorative arts). Carry on with a visit of the Grand Théatre de Bordeaux, true architectural masterpiece of the 18th century.

If you prefer spending your day outside and roaming in Bordeaux, here is a selection of the city’s monuments you should not miss: the opulent 10-hectare-public garden (Jardin Public), the Saint-André gothic cathedral located right next to the Pey Berland tower (both recognised as a place of important cultural heritage by UNESCO), the Porte Cailhau, Column of the Girondins and many, many more!

For the shopping addicts, take a look in the ‘Quai des marques’ (Dock of brands), you will probably not be able to resist buying some clothes from renown French brands and local fashion designers.

Whatever the reasons for coming to Bordeaux, whether it is just as a tourist or to take a French course at one of the Apple Languages schools, one thing is for sure: you will definitely fall in love with this delightful jewel of France. Bordeaux guarantees there is always something fun and cool to do, from morning to night and you will never get bored!