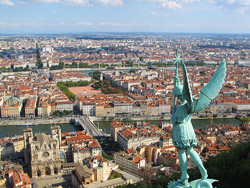 Situated 290 miles from Paris, 200 miles from Marseille, 260 miles from Strasbourg, 100 miles from Geneva and 170 miles from Turin, Lyon has seized the opportunity offered by its central location. Third biggest city of France in terms of population, its economy is the second ‘healthiest’ in France. Lyon is a major centre for banking, chemical, pharmaceutical and biotech industries, not surprising that its population is booming! The city is within easy reach from every major European city, given that it has a well-connected airport 25 km east of its centre.

It is not hard to see how Lyon was ranked amongst the most preferred cities in the world by students living there in the ‘QS Best Student Cities’ survey from 2012. La Ville des Lumières (the City of Lights), not to be confused with Ville Lumière (City of Light, Paris), makes the most of its distinctive architecture, culture and gastronomy, making it a typical heritage city, according to UNESCO and those that are lucky enough to experience it!

Founded by the Romans, Lyon has been a centre of interest for many different countries throughout its 2,000 years of History. Luckily, the metropolis hasn’t experienced any major natural or manmade disasters or any regrettable urban planning during its history and this is why the city is one of the very few in the world to display such variety in its urban structure and architecture. It was home to the Roman Empire, the Capital of Gaul, the first Christian communities as well as many Empires and Monarchies who laid claim to this precious territory.

Lyon has always been a place for innovation and this is where Auguste and Louis Lumière patented numerous significant processes leading up to the first real motion picture to be recorded in 1895, the birth of modern day cinema!

You may have heard of Lyon due to its prestigious football club, Olympique Lyonnais, which has played in the UEFA champions league several times. If you’re not passionate about sports, don’t worry, football is just one aspect among the multitude of experiences Lyon has to offer!

What follows is an example itinerary for a packed day around Lyon:

Whether you are in Lyon to take one of our French language courses or simply as a tourist, you will be delighted to learn that Lyon has many public transport options such as an underground metro, tram system, buses and even a funicular (steep, cable operated) railway, which will all enable you to visit every single corner of this prestigious city. Although, visiting the centre and the peninsula by foot will add perspective to your city tour – as you will definitely better feel the charm of the ‘ville des lumières’.

Start your day with a breakfast alongside the lovely and recently renovated decks of the Rhone River. Roam around for a moment whilst admiring the river and the nearby monuments and then head in the direction of Place Bellecour where a statue of Louis XIV overlooks an impressive pedestrian square. Your next stop is la rue de la République (Republic Street), the main shopping street of the city, where you will probably be tempted to treat yourself! You will eventually arrive at the Place des Terreaux, classified as a World Heritage Site by UNESCO.

Hop on the funicular to get up above Fourvière hill and enjoy the bird’s eye view of the city, you can then make your way down by walking through St Jean footpath and the old part of Lyon. The Vieux Lyon is the city’s oldest district, covering an area of 424 hectares, which makes it one of Europe’s largest Renaissance Neighbourhoods.

Time flies when you are having fun in France! On this day tour of the city it’s already time to eat something; choose one of the numerous and high-quality restaurants in the Vieux Lyon, and enjoy some of the city’s specialties: andouillettes (sausage), quenelles (a mixture of creamed fish combined with breadcrumbs) and cervelle de canut (brains of silk worker: nothing terrifying, but rather white cheese, chopped herbs and shallots…delicious!).

After filling up with some typical Lyonnaise cuisine, you would probably enjoy taking a nap, but no time for rest, there is still so much to see and do! You could wander around the Parc de la Tête d’or (Golden Head Park) and have a relaxing break whilst visiting the free-entry zoo.

In the afternoon, we suggest you to visit monuments and museums such as the marvellous gothic Cathedral of St. John the Baptist, the Musée des Beaux-Arts (the Museum of Fine Arts), the Musée Lumière, dedicated to the incredible inventions of the Lumière brothers, and finally the Centre d’Histoire de la Résistance et de la Déportation (Centre for the History of the Resistance and Deportation), a genuine testament to the French Resistance during the German invasion of the Free-zone in 1942.

After all these cultural activities, you really deserve having a drink in one of the spacious and open-air cafés at the Terreaux Square, where you will definitely soak up the last rays of the sun. Walk until you reach the decks or the Bellecour Square, where you can appreciate the beauty of the riverbanks and the illuminated bridges whilst having dinner.

Spend the rest of your day living like an local in one of the many pubs and pleasant places where you will have fun for sure. If you are thinking of taking a language course in Lyon in the summer, you will absolutely not be disappointed: the Nuits de Fourvière Festival will make the most of your nights out!

Every summer, the city hosts this open-air festival in the splendid site of the Lyon’s antique Roman Theatre, which has a seating capacity of 4,700! This lively festival starts in June and lasts 2 months; it showcases around 50 performances with many concerts, theatre and dance shows as well as music films programs. This fete enjoys an ever-growing spectacle, making its way on to the major international festival lists; you don’t want to miss this!

Still in the category of festivals, go to the city of Vienne, located 20 km south of Lyon and enjoy part of a two-week Jazz Festival where you will certainly love the scenery and the vibrant atmosphere, that makes everyone get up on their feet!

Whether you want to study on a language course, or just spend a few days in this typically French city, Lyon will welcome you all year round and make sure you will be permanently captivated by its unique charm.