A tour in Tours 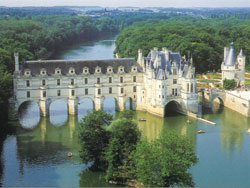 Located in the central region of France, Tours is a well preserved jewel of French History. The “City of art and history” was the capital of the French Kingdom in the 15th and 16th century. Tours is crossed by the Loire River, a place that has been sparking numerous artists’ inspirations throughout the times. Tours is also famous for its “art de vivre” (art of living) thanks to the architecture of its many magnificent monuments, its mild climate (important for wine production), as well as its world-renowned gastronomy.

Dynamic, attractive, lively and full of students, roaming in Tours’ streets is an incredibly pleasant experience… discover here what to expect during your unforgettable stay in Tours!

A stroll in one of the city’s longest pedestrian rue de Bordeaux will lead you to Jean-Jaurès square, where you will encounter (and be probably stunned by) two colossal monuments: the courthouse and the town hall, excessively large compared to the square. The latter will remind you of the Parisians buildings and is also an excellent place to carry on further exploring the city, from here take the rue Nationale…

The Musée des Beaux-Arts (Fine Art Museum) is definitely worth visiting. Formerly a palace, the museum is now home to many collections of French and foreign paints that date back from the Middle-Age to the 20th century, including paints from Rubens, Rembrandt, Delacroix and Degas.

Whilst strolling along the streets in Tours, make a stop at the unique Saint-Gatien cathedral, whose construction took place between the 12th and 16th centuries. As a consequence, its origins are from the Roman period, its ornamentation is Gothic, and its two towers date back to the 16th century… 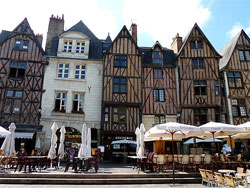 Roaming around the streets of this fantastic city actually feels good underfoot! You will discover the cobbled streets step by step, passing by numerous bars and cafés aligned till the Plumereau square. This is the ideal place to take a break and soak up the first rays of sun, whilst admiring the half-timbered houses decorating the square.

Further highlights of the city include ‘Parc de l’île Simon’, accessible from the Napoléon Bridge. This forest offers tranquillity and a change of scenery, perfectly designed for resting and relaxing.

If you visit Tours between April and September, you probably don’t want to miss out the festivities organised alongside the Loire River, which showcase a range of animations such as dancing, concerts, board games, outdoor cinema and more…in any case, this is a great opportunity to spend some quality time surrounded by a typically French atmosphere! 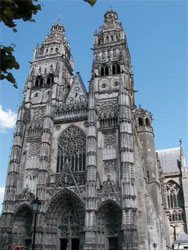 The most impressive walks around Tours are unquestionably via the numerous castles, with their impressive, historic architecture and rich past. Built during the Renaissance, these castles symbolized the power of the French Kingdom throughout times, where its most important members resided.

Located respectively 46 km, 17 km, 25 km and 65 km away from Tours, you could only admire the magnificence of the château de Chenonceau, the château de Villandry, the château d’Azay-le-Rideau and the château de Blois, which are, whether you are passionate about history or not, definitely worth visiting, and will instantly transport you back in time.

I hope, by reading the above, you have surely understood that Tours is a city second to none, where life is absolutely sweet; its mild climate will enable you to come and visit the city at all times of the year, but be careful, you might not want to leave!