Two essentials for a trip to Annecy: your camera, and your ID! 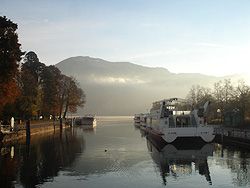 If you choose to attend a course in Annecy, be sure take a good camera as this is a particularly photogenic town!

The crisp mornings are my favourite time of day with the sun just rising, the mist swirling low over the lake and all around, the beautiful snow-capped mountains covered with evergreen trees.

The town itself is also a joy to explore with a mediaeval centre in the shadow of Annecy castle which took 4 centuries to complete.

Of particular interest is the Palais de l’Ile. This is a 12th Century building in the middle of one of the town’s main canals and with a triangular shape which resembles the bow of a stone ship heading out on to the lake. This is said to be one of the most photographed buildings in France! 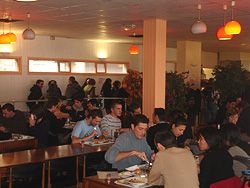 The school in Annecy is just 10 minutes walking distance from here and actually has some classrooms and a terrace overlooking the lake!

If you are keen on adventure sports then this is definitely the place for you! The activity co-ordinator is a keen skier so not only arranges regular ski trips (Annecy is so close to the mountains, you can go skiing in the afternoons after class!) but also other sports such as kayaking, hiking, rock climbing and paragliding!

The school shares the campus with an art college so students at the school can use the college canteen to have very inexpensive (but good quality!) meals and also have the opportunity to put their language skills into practice with the French students!

Travelling back from Annecy to Geneva by coach was also good fun as just outside of the town it was a winter wonderland with snow all around and blowing a real blizzard!

Crossing the border back into Switzerland was an interesting experience…

There was no indication that we were approaching the border until the coach stopped at a border checkpoint – an inconspicuous cabin in the middle of the road, half way down a high street.

Two border guards flagged down the coach and got on. ‘Bonjour, Mesdames et messieurs. Vos papiers s’il vous plait!’. One guard went straight to the back whilst the other began checking everybody’s ID cards (or passport in my case) from the front.

When the guard got to me, I handed him my passport. Although everything was totally in order, I couldn’t help feeling a little nervous, particularly when the guard paused and looked up at his colleague, whilst still holding my passport. GULP!

He then quickly gave it back to me before both he and the other guard promptly got off the bus, escorting one man who apparently did not have his ID card with him and which provided plenty of excited gossip for the other passengers for the next 15 minutes until we arrived at Geneva train station, from where I took the train to the airport for my flight home.

All in all, a very enjoyable experience!