A culinary trip to Bavaria 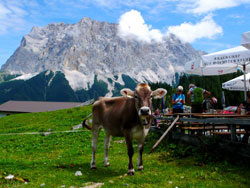 Not only has Bavaria got beautiful landscapes, charming cities and great beer, but also delicious food! If you want to get to know the Bavarian cuisine, there’s no better way to cook it yourself. I’ll introduce my favourite dishes to you below, that are both easy to cook and super tasty!

A real rustic Bavarian breakfast is the so called “Weißwurstfrühstück” (white sausage breakfast). White sausages consist of veal, pork and spices and are traditionally eaten with sweet mustard. They are served with Pretzels and wheat beer. An old tradition says to eat them before noon. This is due to them being made freshly in the morning (people weren’t previously able to cool them or to conserve them) and because it often was the first meal of the day, between the start of work and noon. This tradition has been preserved and is still very popular. A short hint concerning the consumption: the traditional way to eat white sausages is by sucking the meat out of the skin (in Bavarian called zuzeln). Alternatively, and the more discreet way to eat them is by cutting them longways and then rolling out the meat of the skin with a fork and a knife. Real Bavarians swear by the first method, the second method, however, is a bit more “elegant”, but just try it yourself!

As main course for lunch or dinner, Kässpätzle (small egg noodles) are a great choice. They look like a lot of work but are so easy to make! You need a special device to make them, called “Spätzlereibe” or “Spätzlesieb”. This is similar to a cheese grater, but particularly for these small noodles. They cost around 20 Euros. If you have one, you’re good to go!

Mix eggs, flower, water and salt and knead the dough thoroughly. Put the Spätzlereibe on top of your pot filled with boiling water, put the dough into the Spätzlereibe and grate it into the boiling water. You’ve just made Spätzle! Boil them for 1-2 minutes, until they swim up to the surface. Take them out with a slotted spoon and layer them into a casserole dish – one layer of Spätzle, one layer of cheese, one layer of Spätzle and again a layer of cheese. Put the dish for about 10 minutes into the oven (200 degrees). If you like, you can roast onion rings in a pan with butter and put them on top of the cheese to add more flavour. It’s a quick homemade dish that is simply delicious!

Another delicacy of the Bavarian kitchen is “Leberkäs” (direct translation: liver cheese), served either in a bun (bavarian: Semmel) or with potato salad, fried potatoes or fried egg. A “Leberkässemmel” (Leberkäse in a bun) is a delicious snack and replacing the bun with other side dishes turns it in to a delicious main course. The Bavarian Leberkäs doesn’t contain liver but rather beef and pork, bacon, water, onions, salt and marjoram. All the ingredients are chopped up, mixed and baked afterwards. In Bavaria, you can buy Leberkässemmeln at almost every butcher (the same goes for white sausages), which confirms its popularity. You have to try it!

My favourite dish when I was a child was “Semmelknödel” (bread dumplings) with mushroom sauce and it’s still in the top 5 of my all-time favourite dishes! They are easy to make and are very delicious. They compliment meat dishes perfectly!

Ingredients for the dumplings:

Pour the milk over the dried and chopped white bread and mix it with your hands. Add parsley, the diced onion and eggs and mix it all well. Season it with salt, pepper and nutmeg and let the dough rest for a bit. Form approximately 8 round dumplings with wet hands and cook them for 20 minutes in boiling saltwater (the dumplings need to be able to float). Take the dumplings out with a slotted spoon.

Ingredients for the sauce:

Clean the mushrooms, cut them into slices and pour some lemon juice on them. Chop the onion and the garlic. Roast the onion and the garlic in butter, then add the mushrooms and let it all roast together, turning enough so it cooks evenly. Season it with salt and pepper. Mix one spoon of flower with a bit of cream, add it to the mushrooms, stir it and add the rest of the cream and the sour cream. Now you can serve the dumplings with the sauce and decorate it all with some parsley. Enjoy your meal!

My absolute favourite dessert is my grandma’s Apfelstrudel (apple strudel).

Ingredients for the dough:

Mix all the ingredients and knead the dough with your hands. Add oil or water if the dough is too dry. Cover the dough with a kitchen towel and let it rest for about 30 minutes. Divide the dough into two pieces and roll them out thinly one after the other on a surface covered with flower. Put the apples on the rolled out dough and spread some sugar and cinnamon (and raisins and/or almonds if you like) and roll it all up. Put the two rolls of dough on a greased baking tray and put it in the oven for 40-45 minutes (200 degrees). After 15 minutes, pour some hot milk over the dough, so that it doesn’t get too dry. When the apple strudel is done, you can either serve it with vanilla sauce or vanilla ice cream. Enjoy! 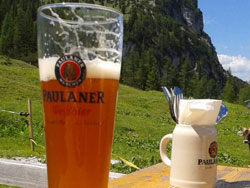 I hope that this trip to the Bavarian cuisine inspired you and you might want to try these dishes on your next trip to Bavaria or maybe cook them yourself at home! An Guad’n! (Bavarian for “Enjoy your meal!”)