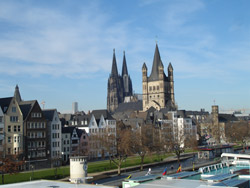 Do you want to experience an important part of German culture and one of the country’s most incredible festivals? In that case you definitely shouldn’t miss the Carnival in Cologne!

The traditions connected to this 5000- year old festival are just as diverse as the places where it is celebrated and even within Germany you will find numerous different customs surrounding the February carnival week that marks the beginning of Lent. However, there is no region where carnival is as firmly anchored in the local culture as in Cologne – experiencing the celebrations in the German ‘capital of carnival’ is something you will never forget!

I have to admit, when I first moved to Cologne three years ago, I was very sceptical about Carnival because in my hometown in northern Germany it is nothing but an excuse to get drunk! Yet, I soon came to realise that the carnival in Cologne was in a different league – the celebrations do not only turn a whole city upside down but also attract more than 1.5 million visitors every year!

A giant street party on November 11th at 11.11 am marks the official beginning of the so called ‘fifth season’ – in the following weeks the 480 carnival associations throughout the city hold their internal events containing Büttenreden (comedic speeches) and performances by the traditional Funkenmariechen (girls dressed in uniforms performing acrobatic dances).The real frenzy doesn’t kick off until Weiberfastnacht in February which is the best workday of the year for many!

On this Thursday everybody in the city goes to work dressed up – which makes the morning commute very entertaining! At 11.11 am (yes, the magic number!) people leave their offices with much fanfare and start celebrating either right in their workplace or in a nearby bar. No matter if you are working at a hairdresser’s, in an insurance company or even for the public authorities – this day is dedicated to having fun together with your colleagues and even superiors. While dancing through the rest of the day, people are usually having Berliner (jam-filled doughnuts), Mettbrötchen (rolls with raw minced pork), sausages, meatballs, pea soup and most important: tons and tons of Kölsch. Due to its lightness this local beer gives the illusion that one can drink huge amounts of it without being affected in any way and since Kölsch is traditionally served in tiny glasses (a fact that especially Bavarians like to make fun of), people are kept busy all day running to get one drink after the other.

From this day on the whole city is in carnival mode – until the following Tuesday people are celebrating, dancing and drinking at any time of day and in every place you could possibly imagine! During the carnival week absolutely every café or restaurant turns into a club and you will hear the typical carnival music in every corner – although the lyrics are all in the regional dialect that very few people actually speak, everybody is able to sing (or rather shout) along. The cheerful songs mostly talk about how great Cologne is and how much its inhabitants love their city.

The official highlight of the carnival week takes place the following Monday (Rosenmontag) and consists of a huge and colourful street parade through the city centre, similar to the ones in other German cities, but WAY bigger. Last year the parade took more than 8 hours and included 12,000 people, around 300 vehicles and more than 500 horses! Thanks to numerous dance and music groups, fantastic costumes and extravagant sculptures the procession resembles a gigantic entertaining street performance. During the parade the participants throw a total of 300,000 kilograms of sweets (everything from little candy to huge bars of chocolate) and more than 300,000 bouquets (Strüßche), which the audience try to catch. Whoever has the patience to spend all day standing in the crowd is guaranteed to go home with a good haul!

Dressed up people all around town, street parties at every time of day and dancing crowds in the metro – Cologne’s carnival puts the whole metropolis into a state of madness and can’t really be described with words. Whether you enjoy the excessiveness or are simply annoyed by the chaos – the atmosphere during the carnival week in Cologne is absolutely unique and something you should experience for yourself! As a firm and important part of the local culture, carnival makes Cologne an exceptionally friendly and open city and creates a feeling of shared identity that you barely find in other German cities. Unusual as it might be, the pride of Cologne’s inhabitants and the love for ‘their’ carnival is what gives the city its special charm and makes it an amazing place to live!

For more information on the German language courses in Cologne offered by Apple Language Courses, please visit the following page of our website: Cologne