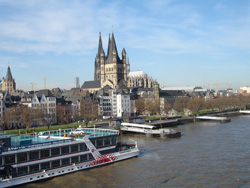 Lake Toma, amongst the stunning mountains of Switzerland, is home to the source of the Rhine. Leaving here it continues its journey through to the Netherlands, where it flows into the North Sea. On its way the biggest city it crosses is cosmopolitan Cologne. Cologne would only be half as beautiful without this fantastic river running through it. The Rhine gives this city a unique and relaxed atmosphere. On its banks visitors to Cologne like to spend their time relaxing alongside the locals, known as ‘Kölner’! I am proud to call Cologne my home town and can speak to you at first-hand about life around this significant river of Europe. Hopefully I will also entice you to explore Cologne yourself!

Each year in July the ‘Kölner Lichter‘ take place on the river Rhine. The Kölner Lichter are huge and impressive fireworks, which should not be missed. Fired from a big ship on the Rhine itself, these fireworks last about half an hour and follow a particular theme. Delightful music accompanies everything, music which also matches the theme! On this evening the locals and people from all over the world come together on the Rhine’s banks to watch this spectacle.

The Rhine throughout the year 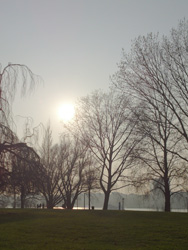 However, on normal days the Rhine is not boring at all! The ‘Rheinpark’ in the district of Deutz offers a range of activities. Here you can play football, go skateboarding and for the children there is also a nice playground. You can also take a ride through the beautiful Rheinpark on a mini-train. For those who prefer to relax and lean back the Rheinpark is the perfect place too! Especially during the summer, the Rheinpark invites you to sun yourself and even share an enjoyable picnic or barbecue with your friends.

The ‘Rheinboulevard’, also located on the banks in Deutz, is another great place to be. It is a fairly new and very modern looking promenade with an impressive flight of steps for people to sit on. Here you can chat with friends for hours whilst admiring the cathedral and the Hohenzollernbrücke – the iconic Hohenzollern bridge. During the summer the Rheinboulevard is the ideal place to soak up the sun!

Cologne – a city separated by the Rhine

The Rhine divides Cologne into two parts. One side is the location for the remarkable cathedral and the fascinating old town and this is the side which many people prefer. The other side is called ‘Schäl Sick’ in Cologne’s dialect (which has the same name as our local beer: Kölsch). ‘Schäl Sick’ translates to something like ‘wrong side’. But as an inhabitant of the Schäl Sick, I have to say this: you should definitely not miss a visit to this part of Cologne!

Nature lovers in particular love this part of Cologne, with its nature reserve ‘Wahner Heide’. The peaceful forest ‘Königsforst‘ also has a lot to offer. The Rheinpark and Rheinboulevard, mentioned above, are also located on the Schäl Sick. Not such a wrong side after all! 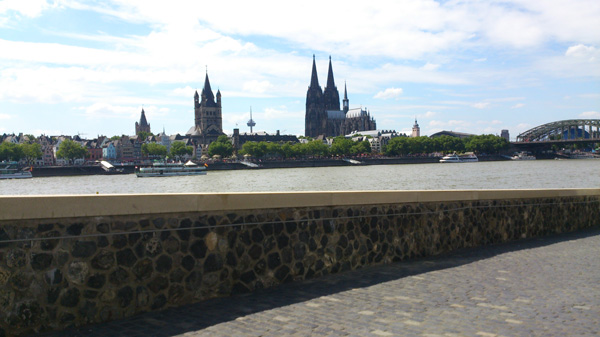 During the carnival period aside from the big and popular ‘Rosenmontagszug’ in the town centre it is also worth viewing one of the smaller ‘Veedelszüge‘, of which there are quite a few really nice and captivating ones, also on the Schäl Sick. After saying all of this, probably the best and most important thing is: from this side of the Rhine you have a stunning view of Cologne’s cathedral! 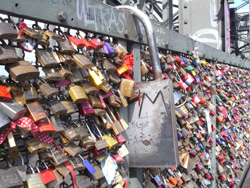 Wherever a river divides a city there are bridges needed, of course, of which Cologne has quite a few! The most popular and in my view the greatest one is the ‘Hohenzollernbrücke‘. As in some other cities as well, couples use this bridge to pledge romantic loyalty to each other. To do so they attach a lock to the bridge and throw the key into the Rhine. Every day when I cross the bridge on my way to university I enjoy the view of the Rhine and at the same time ask myself if all these couples are still together…