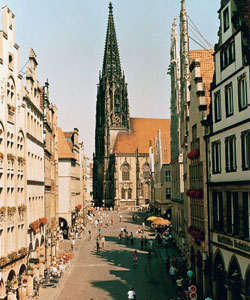 Compared to cities like Berlin or Munich, the German city of Münster has certainly been more of an insider tip for tourists. We Germans, however, know that “Westphalia’s capital” is well worth a visit!

The University City combines the old and the new and is something for everyone who likes a city that is laid-back and safe, but at the same time very cultural and stylish.

Münster has always been one of Germany’s most popular cities for students so it’s no wonder that the city is also one of the youngest in terms of its population.

You can meet lots of students, for example, in any of the bars that concentrate in the district of “Kuhviertel”. Quaint bars such as Das Blaue Haus (the “Blue House”), Cavete or the old brewery Pinkus Müller make this district a cool place to hang out in the evening or during the day. For a night out, you can then head on to the artists’ quarter Hawerkamp – here, a very lively music and club scene has established itself and there will be something danceable for every taste!

Münster easily caters for those who prefer a somewhat more sophisticated environment. The city prides itself with a largely rebuilt historic town as well as countless churches and a dome which dominate the city’s skyline. And, for those of you who have a sweet tooth, I can thoroughly recommend the city’s oldest café “Café Grotemeyer”,  founded in 1850 in the style of a Viennese coffee house. Finest marzipan art and fancy chocolates are their specialty, but if you are able to visit you should really try one of the amazing cakes… or maybe two? 😉 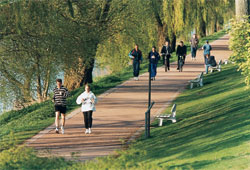 One of many museums worth visiting is the Museum of Natural History, which is located under one roof with a planetarium and the Westphalian State Museum. Right next to it you can find the local zoo and the reservoir Aasee – a nice place in the summer to have barbecues, go jogging or ride a pedalo. Speaking of modes of transportation: Münster is famous for its many cyclists. The city is home to twice as many bicycles as people and is known as Germany’s most cycle-friendly city.

If I’d ask my sister, who has been living in Münster for ten years, what she likes best about this city, she’d probably say: The bunnies. Every year in the spring, Münster becomes a popular place for the common rabbit (you can even see them grazing by the busiest roundabouts)… I guess everyone has their own favourite thing, but all can agree that Münster is a city with a high quality of life. In fact, at the LivCom Awards of 2004 it was even chosen as most liveable city worldwide!

With such a good lifestyle and up to 20% of the population students, Münster is an ideal location in which to learn German! Apple Languages offers German courses for students aged 16 years old and above (15 years old in the summer) in their German language school located right in the city centre!