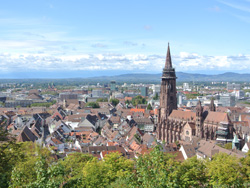 Near the French border, deep in the south of Germany, lies Freiburg, a city that is undisturbed by Big Tourism. It’s okay if you’ve never heard of Freiburg before, but if you’re looking for a great environment to study German, this authentic city on the border of the Black Forest might just be the right place for you!

Even if it’s not the biggest of cities, there’s a lot to see and do here. The following seven reasons to go to Freiburg will show you exactly what this interesting city has to offer.

One thing that every culture vulture will enjoy is that a trip to the theatre is almost inevitable in Freiburg. The epicentre of the artistic scene here is the Theater Freiburg, the oldest and biggest theatre in the city. You can watch opera, ballet, plays, and concerts in what locals call ‘Das Große Haus’ (The Big House) and even see lectures and literature readings in the Winterer Foyer.

If you think that the arts in Freiburg stop here, you’re mistaken. There isn’t just have one main stage – there are also ELEVEN smaller theatres dotted around the city, all covering the different aspects of this old and mesmerising art form. Besides the Theater Freiburg there’s the Vorderhaus Freiburg (which specialises in cabaret performances) and the Wallgraben-Theater (famous for its Loriot performances – perfect if you want a slice of odd German humour!). If you want to peak into the abyss that is German dialects, take a visit to the Alemannische Bühne Freiburg; they only perform plays written in a German dialect named Alemannic. This older version of German sounds almost cartoonish, so be prepared to be totally lost!

Ignore the stereotypes of the cold and stiff German – these actors will give you their all!

While theatre clearly plays a huge role here, Freiburg is also a city of music – and not just opera music. In a city with around 200,000 citizens, there are 30 choirs and 16 orchestras performing regularly. To say that Freiburg really loves music is a bit of an understatement!

It’s not just classical music available here. You can also find a huge folk, jazz, and rock scene here, played in clubs and bars around the city. German jazz is also popular – what first sounds like an odd combination actually has its very own charm. Why not give that a try?!

If you time your stay perfectly, you’ll be able to join the annual Zelt-Musik-Festival (Tent-Music-Festival). This huge celebration of jazz, classical music, and rock, as well as art and acting, has been held since 1983. With its huge circus tents and variety of acts, the event is one-of-a-kind!

If you can’t be far away from nature, her forests, lakes, and hills, don’t worry – Freiburg offers plenty of options to get out of town!

Right on the edge of the city is the Schlossberg (‘castle hill’), an approximately 450-metre-high mountain that’s ideal for some afternoon hiking and enjoying the beautiful view over the city. If you like it a bit higher and are up for a longer hike, look no further: close to Freiburg is another mountain called Schauinsland (literally ‘look-into-the-country’ …), which is a whopping 1,200 metres high! If you’ve ever wanted to feel like Heidi, this is the best chance you’ll get!

If you’re not a huge fan of hiking but would still like to discover some nature while you are in Germany, you can trek to the Arlesheimer See, a lake outside Freiburg. Surrounded by a small forest, this is the perfect place to enjoy nature. Plus, this little place is a also bird sanctuary, so look out for some unusual animals!

If we talk about Freiburg’s architecture, we have to mention the Freiburg Minster, which is the most iconic building in the whole city. The construction of the Minster started around in 1200 and lasted almost 300 years! This long building process has contributed to the minster’s unique architectural style – what started as Romanesque project was finished in Gothic style. Inside you will find two big altars and 16 bells that call the Minster’s tower their home. You can hear the oldest bell ring from Thursday to Sunday.

On the same square the Minster stands on, you will find another special building. The Historical Merchants’ Hall is impossible to overlook; its bright red colour is certainly eye-catching. The arches of its front look unusual, and the same goes for the Hall’s turrets. Between these turrets, decorated with colourful tiles on their roofs, are four sculptures. Three of them show Holy Roman Emperors and the fourth is King Philip I of Castile. If you are around the Minster, you should definitely have a look.

Also in town you’ll find the Colombischlössle. Built in 1859, this manor is now an archaeology museum and with its own public park. Here you can find sculptures, a fountain, and an educational trail about vineyards. Besides that, there is enough space to relax, soak up some sun, and enjoy the Colombischlössle’s atmosphere.

The borders of Europe have been hotly contested for centuries, and that between France and Germany is no exception. Freiburg is only 3 km away from the French border, so the two share a lot of history. Initially a city under the thumb of the famous Habsburg Dynasty, Freiburg was invaded multiple times by the French army, which subsequently took control of the city in the mid-17th century.

Under Louis XIV, Freiburg was heavily fortified, only to be given back to the Habsburgs at the turn of the century. Only 15 years later, the French conquered the city again. For almost 30 years, Freiburg was part of French territory, but a forced retreat from the city during the War of Austrian Succession meant another change of hands. As they left, French troops destroyed a large proportion of the city. One of the remaining buildings from this time is the Breisach Gate, which you can find in the city’s Oldtown. Though it’s now home to a restaurant, history buffs can still see parts of the Gate today.

Almost 50 years after the War of Austrian Succession, French revolutionists conquered the city again, but couldn’t hold it for long. All this back-and-forth, along with long-standing French occupation, left Freiburg with a French touch. While it has definitely kept its German roots, the French influence here is impossible to ignore.

If you are in Freiburg, there are some German dishes you definitely should try out. You’ll have plenty chances to try the famous Bratwurst and Sauerkraut, but there are also some dishes the Swabian region is known for.

Take Maultaschen, for example, which the people of the region also call ‘Herrgottsbescheißerle’ (‘God-cheaters’). You might see a similarity to ravioli here -the dish consists of dough filled with meat, spinach, and onions. Vegetarians can get options just with spinach, or with other meat-free fillings. According to local legend, the Maultasche got its nickname because fasting monks hid the meat in the dough and spinach, so even God himself could not see the meat!

Another absolute classic is Spätzle, which translates to ‘little sparrow’ in the Swabian dialect. Similar to noodles, Spätzle are also made out of dough, though they look quite different. Before the advent of modern tools, the dough was kneaded, quickly shaped by hand, and dropped into boiling water to cook immediately. Some use a ‘Spätzleboard’ to give them their unique form. Spätzle are often served as an accompaniment to various forms of meat, but can also be served with cheese or sausages. Less common but still seen is Spätzle with a compote made of various fruits. You’ll certainly have plenty of options for how to enjoy this traditional south-German dish! 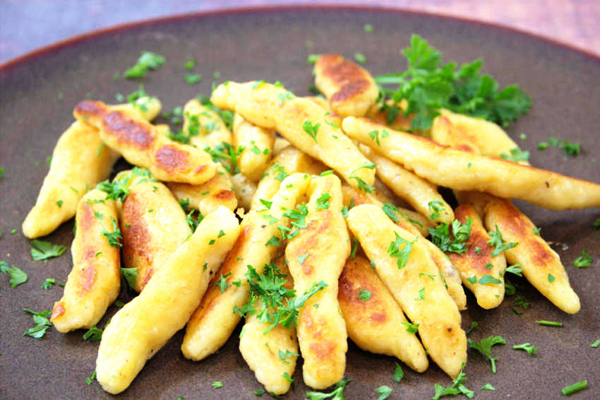 Also unique for southern Germany are Schupfnudeln. These noodles are made of potato dough and are as versatile as Spätzle. The most classic dish of Schupfnudeln is served with the country’s iconic Sauerkraut and bacon though, as with Spätzle, you’ll also find sweet recipes serving them with cinnamon and apple sauce.

Besides these, you will also find a wide variety of bread types and pretzels! Try out as much as you want – the cuisine of Freiburg offers something for everyone. 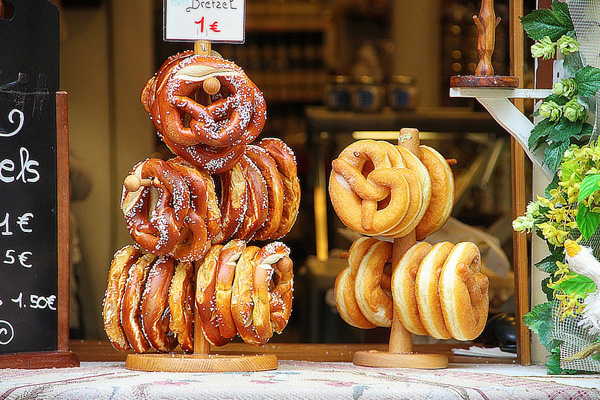 Freiburg has its own charm, blending old and new. Some bits, like the Minster, are hundreds of years old, while some parts have been rebuilt due to the devastation of successive European conflicts. The soul of the city reflects this mixture to create a truly unique atmosphere.

Also, if you believe what the Germans themselves say, you won’t find friendlier people than those in Baden-Württemberg, the region of Freiburg. Because of this, Freiburg is an ideal destination – not only as a place to learn the German language, but also as a place to learn more about German culture and lifestyles. Don’t miss your chance to visit this beautiful city and experience all its facets!

All these reasons added together equal a raw and real German experience, out there waiting to be discovered. While many things might be as you imagine, like Pretzels, Sauerkraut and Bratwurst, there is also a lot you probably don’t know about this wonderful country. And what better way to learn about them than to experience them for yourself?!

Interested? Contact us today and see how we can help you create your own German adventure in Freiburg!