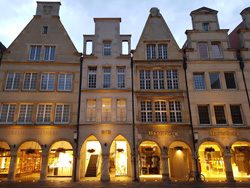 Hello everyone! I’d like to give you a small introduction to Münster, one of the most liveable cities in the world. It even won an award for that in 2004, and is still, to this day, famous for its quality of life. One reason for this is its friendly and helpful people. Another main reason is its eco-friendly methods of transportation.

Münster is Germany’s bicycle capital. Hardly any other city is equipped with such a well-developed network of cycle paths and so many bike-related offers. It’s no wonder that travelling by bike is the most commonly used means of transport in this city!

Münster is located in North Rhine-Westphalia, Germany and is also the cultural centre of the Westphalia region. Below, you can find some ideas of things to do in marvellous Münster.

Have fun in Münster 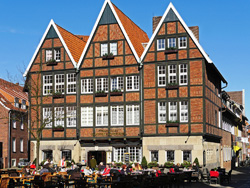 It’s a university city with more than 43,000 students and over 120 fields of study. It is Germany’s fifth largest university. That’s why it is one of Germany’s most popular cities for students!

You will find nice shops on the Prinzipalmarkt, the main shopping street in the city centre. If you don’t find something that suits you, you should check out the Münster Arkarden, a new shopping centre close to the Prinzipalmarkt.

A great place to meet your friends is in the Kuhviertel, which is famous for its numerous bars. For example, the Cavete (Münsters oldest student pub), the Hafen Bar (chilled little cocktail bar with a happy hour from Mon-Fri) and the Finne (they offer organic craft beers).

If you want to grab a bite to eat, I can totally recommend the Kleiner Kiepenkerl, which is a lovely restaurant in the old town. It serves traditional German food and comes with a really nice atmosphere. Especially in summer, their terrace is a great place to sit whilst overlooking the bustling streets of the old town.

Part of the signing of the Peace of Westphalia in 1648 was held in Münster. This brought an end to the Thirty Years’ War.

In the 1940s The Bishop of Münster, Cardinal Clemens August Graf von Galen, was one of the most prominent critics of the Nazi government. He helped draft Pope Pius XI’s anti-Nazi encyclical Mit brennender Sorge (With Burning Concern) in year 1937. In 1941, he delivered three sermons in which he denounced the arrest of Jesuits, the confiscation of church property, attacks on the Church, and in the third, the state-approved killing of invalids. The sermons were illegally circulated in print, inspiring some German Resistance groups, including the White Rose.

This next part will feature 10 fun things to do when visiting Münster! 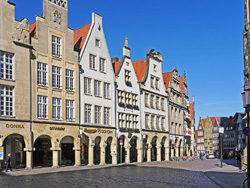 Visit the Prinzipalmarkt, where you will feel as though you have been transported back in time! Telling tales of Münster’s history during the Medieval and Renaissance periods, rows and rows of arcades line the square around the City Hall.

Prinzipalmarkt is also one of the city’s best areas for shopping, with countless independent shops, cafes and restaurants hiding underneath the arcades. It’s definitely worth a visit! But be careful that you don’t spend all your money in just one shop 😉 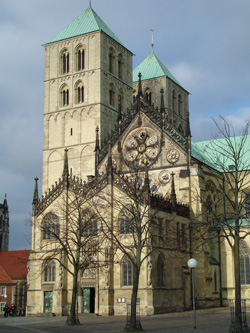 “A cathedral? That’s boring.” You might think. But this one has a very interesting history, with its construction beginning as early as the 12th century! The Cathedral is decorated with an Astronomical Clock, dating back to the 1540s and renowned throughout the country as being one of the most beautiful in the German speaking world.

Inside, you will find the tomb of Clemens August Graf von Galen who died in 1946 and is famous for standing up to Nazi policies during the Second World War. I mentioned him before in the history part above!

Let me give you some advice from an insider: Give yourself plenty of time to investigate this cathedral as there’s a lot to discover. 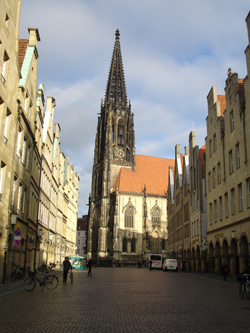 The Church of St. Lamberti is a beautiful piece of Gothic architecture, which was constructed throughout the 14th and 15th centuries.

Just above the clock-face on the church’s huge tower, you will see iron cages. These cages tell a chilling story, as they once held the remains of the leaders of Münster’s Anabaptist rebellion.

For over 600 years, this tower has been home to a night watchman – a tradition which has continued into this very day

4. Hanging out at the Harbor ⚓

Want to have a fun night? Check out Münster’s harbour area! The harbour district has become a mecca for nightlife, culture and restaurants. Students flock here on the weekends and during the week to party all night long to the latest tunes at the city’s hottest dance clubs and bars.

Pablo Picasso is regarded as one of the most influential artists of the 20th century. He is well known for co-founding the Cubist movement and the vast amount of work he produced.

You might know a lot about Picasso’s work, but this museum holds more than 800 of his printed images, all collected by Gert Huizinga – a native of Münster and a former friend of Marie-Thérèse Walter, Picasso’s famous ex-lover. 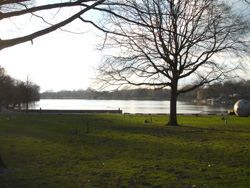 Need to rest after a long day walking around this beautiful city? Then you should go to the Aasee!

Just a short walk from Prinzipalmarkt and right next to the city’s old town, Aasee is a lovely man-made lake. It provides a peaceful resting place for tourists and locals alike, where you can enjoy countryside views of green parkland and serene water for miles.

Why not rent a bike and cycle round the lake, or even hire a pedal boat and enjoy the quiet echoes of nature? What’s more, the edge of the lake is littered with cafes and restaurants, where you can stop en-route and take a well-deserved break!

My advice? Get a cup of tea or coffee and a big slice of a delicious cake in one of the lovely cafes!

Fancy seeing another great attraction in Münster? If yes, then find the jetty for SOLAARIS, a solar-powered boat that ferries people from the city centre to the Allwetterzoo on the west shore.

The zoo is home to around 3,000 animals and 300 different species and allows visitors to see the animals from the shelter of covered walkways. This makes the Allwetter Zoo a perfect attraction whatever the weather (hence the name)! The covered walkways give you a unique opportunity to get up close to all manner of different species – an added bonus for animal lovers and wildlife fanatics!

Still hungry? Find yourself on one of the ample green spaces for picnics and enjoy the sun!

Want to learn more about the history of Münster? Stadtmuseum, located on Salzstraße, gives tourists and locals a wonderful insight into the city’s fascinating and intricate past, from the 9th century all the way up until the present day.

Whether you want to discover the Münster Rebellion, learn about the Prince-Bishops who ruled the city for 700 years, or view reproductions of the cages used to display John of Leiden, a visit to the Stadtmuseum is a must!

My advice: Go and have a look at St. Lamberti on the original cages, you can still see them hanging above the clock. 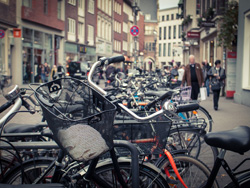 What’s the easiest and best way to explore the city? By bike! Münster’s streets are filled with cycle paths, and it’s no surprise with half a million bicycles in the city – that’s twice as many bikes as there are residents!

Why not cycle along the promenade, where you will see Münster’s former ring of defensive walls? Alternatively, head out into the countryside on your bike and soak up the peaceful atmosphere, where you can enjoy majestic castles and beautiful scenery.

The Botanical Garden of Münster can be found just outside the Altstadt (old town), in an area that was formerly the city’s fortress, and is maintained by the University of Münster.

This magical garden is home to a whopping 8,000 different species of plants and 10 exciting greenhouses – any nature-lover’s dream! The garden comprises a number of indoor and outdoor areas, including a farm garden, a tropical house and a greenhouse with giant Victoria lilies! 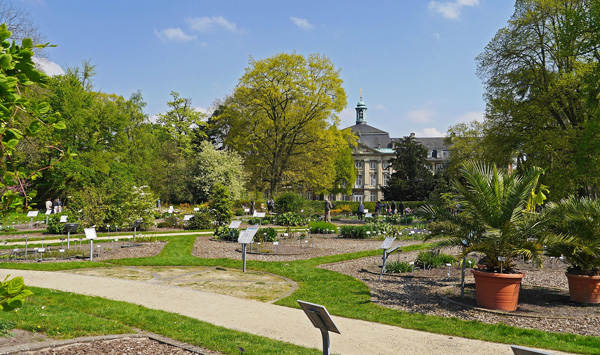 So go learn German in Münster!

As you can see Münster is well worth a visit! Maybe during your next German course with Apple Languages. In a city full of students, you’ll soon feel at home and there are so many fun things to do. Plus, it’s really easy to get around, especially as the German language school is located right in the city centre!