Well for some reason I was a little nervous on my short trip to school on Monday morning; maybe it was the fact that it was early, I hadn´t had any coffee and was still recovering a little from Saturday night; maybe I was reminiscing the last first day I had at school, who knows – but I found out quickly that I needn´t have been.

The street (that the school is on) was much busier now it was a weekday and the cafes were full with people getting a quick fix before they start work – or in my case school! I thought it best to go straight in and in doing so was met with glances and many smiles from fellow international students. I was then greeted by one of the school´s directors who told me what class I was in and the times I will be in it: 8:50 – 13:00 with a 15 minute break in between. The school owns buildings of each side of the street and a bookstore also. My classes were opposite the bookstore on the third floor. There’s a lift, but since I am in training (ahem, cough, cough) for the next season of volleyball I thought I´d run up the stairs instead.

I was 10 minutes early but there was already a Chinese guy in the classroom. Soon after that there came a Brazilian girl, closely followed by a Swedish-Iranian girl, an Australian guy, a Thai girl, a Libyian man, the German teacher and then a girl from Italy who the class joked about always being late. The next day I was to meet three more girls, a Russian, a Japanese, a Spanish and a Korean guy who had all been on a weekend trip to Berlin!

I don´t know how else you could have such a multi-cultural experience than going to learn a language with foreign students! It´s so unique to be able to come together and make friends with people from around the world and that does seem to be a big part of why so many students enjoy coming to Hamburg but also learning a language abroad in general. 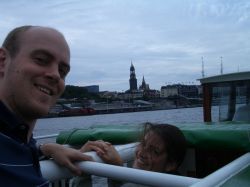 So my lessons had begun; the two teachers I had were very nice and somehow managed to explain everything really well in German to a class full of beginners. We had two short breaks and ended the day knowing all about the Modalverben “müssen, dürfen, können und möchten” (very useful for asking questions!) and also how to ask and tell the time, or… “Wie spät is es?” The grammar takes some getting used to but it certainly helps being in Germany rather than in England with a class full of confused English people!

Not only is German grammar backwards but they like to tell the time 9:25 as “fünf vor halb zehn” that translates back into English as “five (minutes) to half ten”. Yes in Germany 9:30 is half ten. It´s also the same in some Scandanavian countries – so maybe we are the ones that are wrong? It almost makes sense if you think about it – half way through the tenth hour of the day.

Class finshed at 13:00 as promised and I strolled down to the town hall to meet my girlfriend for lunch. I then went exploring (the Nike store amongst other important Hamburg sights!) whilst she worked in the afternoon and after her work we took a harbour boat trip (Hafenrundfahrt), taking in more of the sights for 10 Euros each.

The trip lasted an hour and they served German beer for 2 Euros and had a very funny guy describe the history of the harbour, its significance to the city and Germany as a whole and also information on the sights around the harbour and the city itself. Including… wait for it… the second biggest cargo ship in the world!!! Joking aside, it was a fun trip and a great way to learn more about the city, so I thoroughly recommend it. I should have paid closer attention to the activity schedule however, as I found out that the school were doing the same trip on Tuesday.