My (second) trip to Cologne! 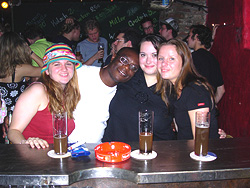 I got my first taste of Cologne in 2006, when I travelled there with a few friends during the Football World Cup and camped out with thousands of other fans on the meadows by the Rhine. So when it came to deciding on a location for my German course, I can’t say that I took a long time to think about it!

The memories of welcoming, friendly locals, the spirit of fun and excitement and all the sights and places that I hadn’t gone to on my first visit, immediately convinced me – I definitely wanted to go back to Cologne!.

So, I travelled to Cologne to start my German course. The school was great, located right in the centre of the city, with great teachers and a great mixture of students from all over the world!

After class I would often spend much of my time simply walking about, exploring the town – the shopping streets, the parks (if you go there, go check out Friedenspark – or peace park – it’s the most stunning spot of green I’ve ever seen and perfect for picnics or a late lunch outdoors), the restaurants and the museums (the chocolate museums sure catered to my sweet tooth and the Roman-Germanic museum had the most fascinating relicts from the times when Cologne still was a Roman colony). 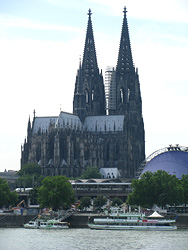 One of the most stunning sights is of course the gothic cathedral and the charming old town but it was the little things that impressed me most: Standing on one of the many bridges over the Rhine and watching the sun go down while counting the ships that passed beneath my feet, meeting with friends and going for walks through the Rhine meadows, or visiting a buzzing flee market by the riverside. There’s just so MUCH to do in Cologne!

One of my most memorable days was when one sunny afternoon, I took my camera to Rheinpark, a huge and beautiful park filled with attractions for kids and artwork for grown-ups. I had just planned to visit the park, but after crossing it I found myself in front of a charming ropeway over the river. On a whim, I took a ride and I can still feel my stomach tingling from the sensation of being in the small cabin, suspended over the Rhine and enjoying incredible views over the city. Once safe on the other bank, I was told that the ticket gave me a discount to the Zoo, which I found myself standing right in front of! I spent the rest of the afternoon walking amidst polar-bears, monkeys, tropical birds, giraffes and much, much more! It just shows what happens in Cologne – You go to one place and find much, much more than you’d expected!

Once the sun sets, though, Cologne offers a whole different kind of fun – the nightlife there is definitely something! For Bars, Clubs and Discos I discovered that the best place to go is near the University. The nightlife there centers around Rudopfplatz/Zülpicher Platz, where, during the day, I also found lots of great, inexpensive restaurants and the nice atmosphere that students lend to a place. Another area that comes to live at night is actually the old town, which after dark starts to teem with music and sparkly lights and the small cobblestone streets are suddenly filled with young people enjoying themselves.

And for a more cultural approach to a night out, Cologne also has a huge array of charming, small theatres (awesome for language practice, I found), cinemas (even an English one only 5 minutes away from the School), a musical dome, opera and concert halls.

All in all, I can only say that I would recommend a trip to Cologne to anyone – the city is amazing, the school is great and I still can’t believe how much my German improved there without feeling like hard work at all! On the contrary, I had a wonderful holiday in Germany, met a lot of great, really interesting people, made loads of friends and came back, really confident in my language abilities! Could it get any better?