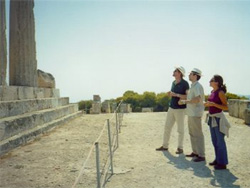 Greek – or, for that matter, any language with a different ethnography – is notoriously difficult for speakers whose native or most-commonly-used language utilises the Latin alphabet (for those who aren’t familiar: that’s your ABCs, as opposed to your АБВs).

Though quite au fait with other European languages, and having been bilingual since the age of 5, our travel-blogger Jo Franco definitely learned this the hard way!

There are new rules now: Us sound like Vs, Vs sound like Ns, Ps are Rs, and Ls are what looks like an upside down Y. And right side up Ys sound like Hs but are really Gs.

At this point, some of you might be thinking, ‘What’s the point?’, ‘Why bother, when most Europeans speak English?’, or perhaps even, ‘Why would she want to do that to herself?!’ … Aside from the obvious fact that it’s infinitely more fulfilling to be able to speak to a foreigner in their native language, or the other obvious fact that knowing at least some of a language helps you get around during your holidays, there’s this much lesser-known fact: quite a lot of English words are actually Greek.

In fact, around 30% of our native tongue derives, whether directly or indirectly, from Classic Greek. Usually these words are used for complicated medical phrases – such as the tongue-twisting sphenopalatine ganglioneuralgia (which, by the way, is the technical term for brain-freeze). Let’s take it apart and have a look:

Other, more familiar examples include:

Learning Greek truly gives an insight into the meaning of words in other languages, and relationships between distinct vocabularies – especially those across southern Europe. You can even trace Greece’s influence across history, simply by looking at words borrowed from or inspired by Greek across the world. As titans of literature, science, and philosophy, as conquerors of Europe and East Asia and, because of this, as the vehicle by which many Eastern ideas and teachings travelled West, the Ancient Greeks’ impact is not to be understated.

Our school in Athens, located right in the heart of the city in the shadow of the Acropolis, aims to teach this strange and beautiful tongue to its students. It opens its doors throughout the year to students of all ages, from countries including Germany, Slovenia, Austria, and South Africa. It offers 20 hours of group or one-to-one tuition per week, and can also arrange evening courses if you are in the area and busy during the day. As well as high-quality language classes, the school can also provide accommodation during your stay (contact our team to ask about this!). 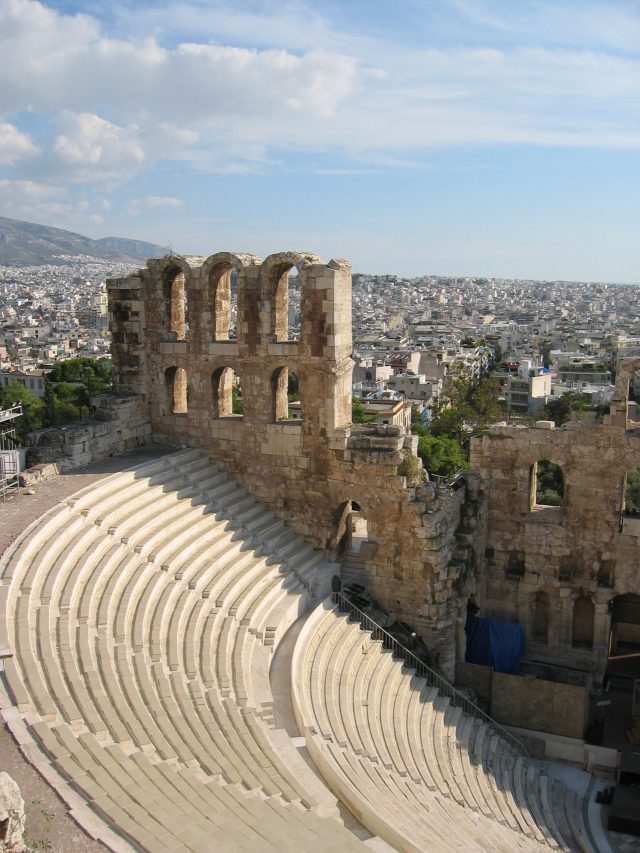 Jo opted for private lessons so that she could fit her studies around her travels – she visited Santorini, Kythira island, the Peloponnese peninsula, and several of Athens’ colourful districts during her brief stint in the country. The great benefit of a private course is that you always have your tutor’s undivided attention, allowing you to focus on any areas of weakness or interest you may have. Whether you’re struggling or thriving, your tutor can match your pace, in a way that is not always achievable with group lessons.

I was greeted by two adorable Athenians, Nicky, and Alexandra. Two people I didn’t even know existed five minutes before were now going to teach me a new language I had no prior knowledge of …

The smile on Nicky’s face was so warm it broke any ice in between me and the experience I was about to have.

At first, it was difficult. Greek is rated ‘medium’ on the US Department of State’s Foreign Service Institute’s info-graphic on learning languages, which rates several world languages in order of the time and effort it takes for English speakers to learn them. They estimate that it takes the average speaker around 1,110 class hours to be proficient.

As well as the ‘upside down’ alphabet, Greek has genders and tenses and verb declensions that English speakers usually find confusing. After all, there’s a reason people say, ‘It’s all Greek to me!’ … However, if you can grasp these, things begin to fall in to place. Having a bespoke, private learning experience certainly helped Jo – by the end of the week, she’d gone from mumbling vague greetings to actually being able to communicate.

Textbook and notebook on the table, I tried finding the words to order my food without speaking English. Being a language nerd pays off. The servers thought I was so adorable with my elementary language skills that they gave me a free shot of Mastiha …

For English speakers especially, this is a strange situation to be in. We can travel to almost anywhere in the world and have a conversation with almost anyone. Our mother tongue is learned by children in schools everywhere; our music is played in bars and shops in every corner of the globe; our television (or, more accurately, American English television) is available on almost any TV set in most of the houses or hotels you’re likely to visit. We, therefore, should always be satisfied.

But there’s something innately fulfilling – no doubt because of the challenge – about trying to turn the tables. Learning new languages gets us out of our comfort zone, not just in terms of speaking but also in terms of experiencing new ways of life. It helps us learn how to communicate with other people who might be quite different from ourselves, with different lives and beliefs and opinions. To a certain extent, learning a new language also gives us an insight into how other cultures view the world. For example, the Greek word for the @ symbol is παπάκι [papaki], which literally translates as ‘little duck’ – how weird is that?!

In Jo’s own words:

It was crazy to realize that what sounded like gibberish was now things I knew how to respond to …  I had no idea I would fall in love with such a different language. The point is, you should Shut Up and Go to places you don’t even expect to fall in love with.

How are you = Tι κάvεις; [Tee kanis?] à note the different quotation mark!