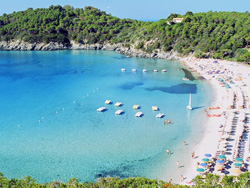 Spring is round the corner. The days are getting warmer and people are starting to think of their summer holidays. Want a productive summer break on an enchanting island? Then take an Italian language course in amazing Elba!

For those of you who are not familiar, Elba is a Mediterranean island in Tuscany, Italy. Elba is located in the Tyrrhenian Sea, about 50 kilometres east of the French Island of Corsica. It’s the third largest island in Italy, after Sicily and Sardinia and the largest island in the Tuscan Archipelago.

Elba is a summer favorite due to its beautiful beaches and stunning landscapes. However, the island is not just about sun-bathing and beaches: this place is soaked in history!

Did you know that the French Emperor Napoleon was exiled to Elba? It was after he lost the Battle of Leipzig in 1813. Napoleon stayed on Elba for almost a year, before escaping back to France. Today being ’exiled’ to Elba doesn’t sound so bad!

Here’s what this beautiful, yet often underestimated, island has to offer!

The Island of a Thousand Fires 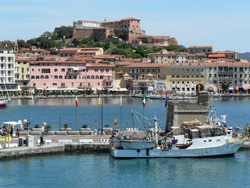 You may not be aware of the importance of this island in terms of mineral resources. Due to these resources, Elba has been contested and occupied by many great Mediterranean powers. In fact, thanks also to its strategic position in the Mediterranean, Elba has played a major role in sea trade control since the dawn of history.

Long before the Romans ruled there was the Etruscan civilization. It was these that nicknamed Elba: “The Island of a thousand fires“. Mainly due to the serene beauty, the rich colours of the landscape and the pureness of its minerals. During this period the island went through impressive development, continuing until the end of the 1st century BC.

The Etruscans spread their dominion as far as Elba specifically due to the islands giant iron deposits. The extraction and working of this iron became a very organized industry.  In later years, because the wood for melting the iron in the furnaces started to become scarce, the iron was worked on mainland Tuscany.

From 1950 onwards, the economic boom and the arrival of tourism caused the mines in Elba to close down. In 1981 even the last one, the Ginevro Mine, closed for good.

Today, thanks to the Mineral Park of Elba Island and the Calamita Mineral Park, both the mineral sites and the historical and cultural past of Elba are preserved. Even if you don’t have a passion for rocks, we suggest you to take a tour in the fascinating mines! Each one is characterized by a different color, all glittering with iron deposits. The atmosphere is actually magic—like being in a fairy tale! 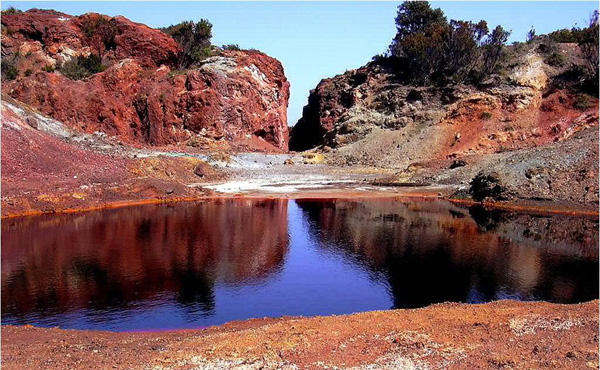 If you love hiking, we suggest climbing the peak of Monte Capanne. This is one of the highest points of the entire Island at 1019 meters above sea level. Walking along the trails, you’ll also discover the charming Mediterranean forests, woodlands and scrub.

If hiking is not really your thing, well, don’t worry! You can reach the top in just 14 minutes by cable car.

This lookout is the ideal place to admire the beautiful landscape Elba. Make sure you take some great panoramic shots here.

The Monte Capanne is also the perfect environment for several plants and animals. In fact here you will catch a sight of wild boars or mouflons—Elba’s impressive wild sheep. 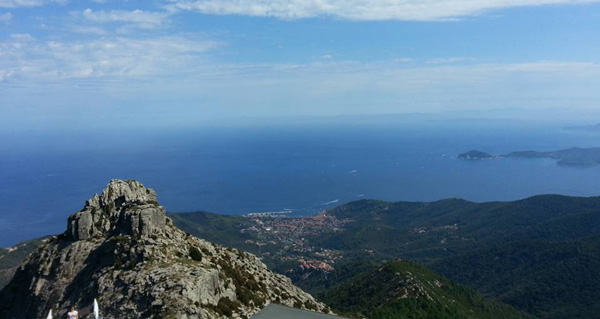 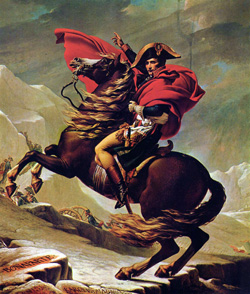 As we already mentioned, Elba has been inhabited since the Iron Age. Ligurian tribes were followed by Etruscans and then the Greeks. However none of these civilisations did more in such little time as the greatest French military mastermind: Napoleon Bonaparte.

Though his exile in Portoferraio, the main town of the island, lasted less than a year, Napoleon left a lasting mark on Elba. The inhabitants even now, almost 200 years later, still say a Mass each May for his soul at Chiesa della Misericordia.

Upon his arrival, Napoleon started work on many different projects. He invested money in modernizing the island, road-building, introducing administrative decrees and sustaining the rise of the industries. He also helped with marsh draining and a thorough overhaul of the legal and education systems. Napoleon also oversaw improvements to the island’s iron-ore mines, which helped bring in revenue.

However, despite his achievements and the remarkable work in Elba, the only real evidence of Napoleon’s residency are that of his two homes: Villa dei Mulini and Villa San Martino.

This was the emperor’s primary residence and certainly the most important Napoleonic site in Elba. It is situated on Portoferraio, between the two defensive forts (Forte Falcone and Forte Sella). The mansion takes its name from the several windmills that were demolished to build the impressive Italian garden. This was all completed at the request of Napoleon himself, who, during his stay, tried his best to recreate the splendor of his French court.

Napoleon preferred this residence due to its strategic position overlooking the town and the sea. Nowadays the mansion is a museum featuring a library that the former Emperor brought with him during his exile. It was later donated to the city of Portoferraio.

Napoleon’s summer residence Villa San Martino is located in the countryside of Elba. It was built in a neoclassical style and is roughly 5km from Portoferraio. Napoleon reportedly never spent much time here, despite it being more opulent and peaceful than Villa dei Mulini.

A must-see in this astonishing villa is the Egyptian room on the second floor. Its walls are decorated with trompe l’oeil, hieroglyphs and pyramids. A large zodiac is painted on the ceiling to commemorate his Egyptian campaign. You can also admire an octagonal basin here that contains papyrus plants.

Look up on the ceiling in the ‘Room of the Love Knot’. Used at the time as a dining room, you can appreciate the beautiful frescos which represent the love between Napoleon and Marie Louise. This is symbolized by two doves flying away that are tying a knot of love.

Before being restored and turned in to a museum, the villa was used as headquarters during German occupation in the Second World War.

If you’re planning to spend your free time in the name of relaxation, then Elba is the place for you!

This island offers so many options in terms of beaches that you’ll have plenty to choose from. From sandy beaches, to rocky coastlines and well-equipped resorts, you just need to know where to go!

There’s so many stunning beaches, many completely different. It’s almost impossible to make a list of them all. Here we have picked just a few that we believe are the best!

This is one of the most popular beaches in Elba. Thanks to its the natural beauty, the crystal-clear water and the 300 meters of fine white sand. People come here not just during the summer months, but also during low season.

The beach of Cavoli is located on the southern coast of the island, around 4.5 km from Marina di Campo. The name Cavoli comes from the word “cavil”, that refers to the semi worked blocks of granite, once brought from the nearby granite quarries.

Being a favorite for both locals and tourists, it’s usually quite crowded (especially with young people). It is therefore not ideal for those looking for peace and tranquility.

If you plan to go there, we recommend waking up early so that you can find some room for your towel. Trust us, it’ll be worth it!

The famous Grotta Azzurra, on the eastern side of the beach, is also well worth a visit. You just need to hire a boat or a pedalo. 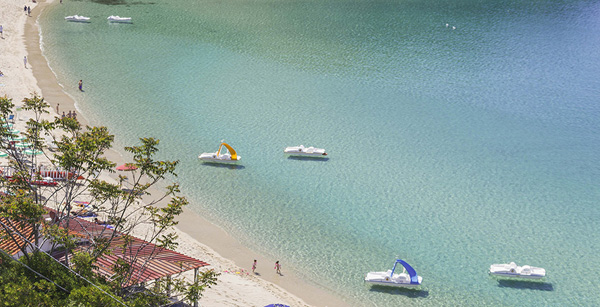 The beach of Sansone is located between the beaches of Acquaviva and the Enfola headland. You will find it running parallel to the road to Portoferraio. It is a white pebble beach that boasts turquoise waters. Sansone is quite a popular beach and a perfect backdrop for photographs.

We must say that this beach is not that easy to reach. In fact, especially in high season, you will struggle to find a place to park. It is then a 500 metre-walk along a very bumpy path, both down and uphill.

As you can see, Sansone beach requires some sacrifice, but don’t let that put you off, because you will be well rewarded!

Indeed, arriving at the peak of the path, the view is a little breathtaking. In front of you, in all its majestic beauty, you’ll see one of the most picturesque corners of the Island of Elba. The cliffs are so majestic and make an impressive backdrop. It is certainly one of the most interesting sights on the island, even if you don’t stay for long. 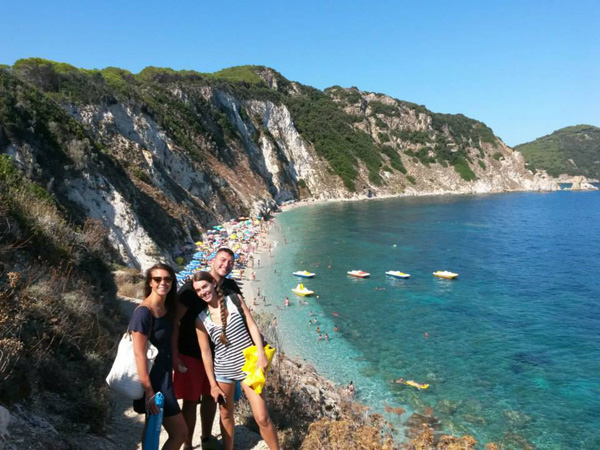 This beach is connected to an 800-metre long peninsula which forms a nice sheltered bay. The water is always warm and calm thanks to the scirocco winds and you are surrounded by verdant, Mediterranean bushes and the typical holm oaks.

The beach itself is 200-metres long. Some parts are less crowded and it is a great place to bathe. The water remains shallow until quite far out, making it ideal for families with children. 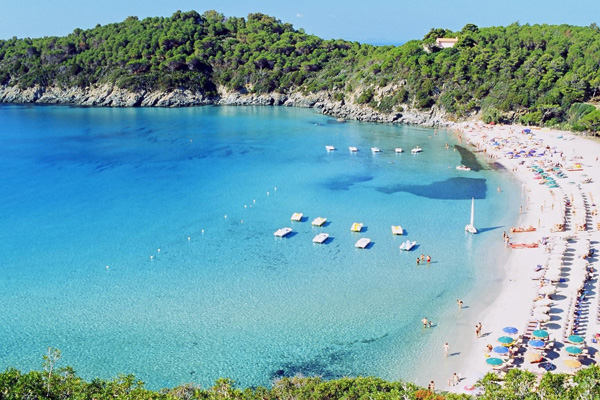 Sant’Andrea is a wonderful small sandy beach with granite rocks on the sides. It is located on the north-east side of the island, about 6 km from Marciana Alta.

Sheltered by all but the north winds, Sant’Andrea beach is a 130-metre long stretch of golden sand and shallow water, ideal for scuba diving.

In the past, this beach was used as a docking bay for ships from the mainland to be loaded with the local wine. You can still find the remains of the ancient dock on the western side of the beach.

What really makes Sant’Andrea unique are the granite rocks, or Cote Piane, as they are referred to in Italian. These remarkable rock forms were smoothed by the sea and winds over the centuries. As the sun goes down, they reflect the colors of the sunset thanks to the thousands of feldspar crystals within.

In spring, the spectacular sight of the fuchsia colored flowers of the Hottentot figs in full bloom is a must see! 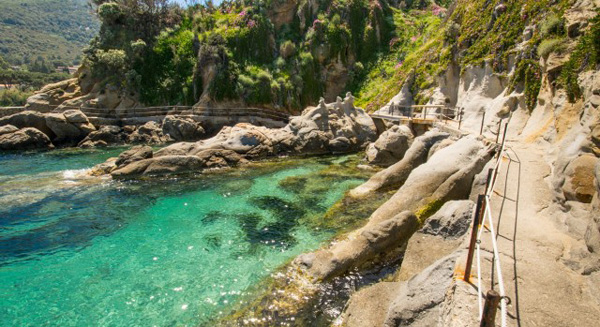 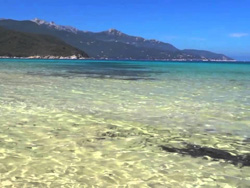 Beach la Biodola Portoferraio is a perfect combination of sea, sand and nature. It is over 500 metres long and the largest beach in the Biodola bay. The sea bed gently slopes so to create a safe environment of pristine shallow water.

It is very popular with nearby hotels, so parking isn’t easy, but being so large you shouldn’t struggle to find space on this beach. Like Fetovaia it is also ideal for families.

The coastline of Marciana Marina, the Enfola peninsula, as well as the Island of Capraia can all be seen clearly on the horizon. Make sure you enjoy the sunset from this beach for a unique and unforgettable experience!

Elba isn’t just about beautiful beaches. At the heart of this island is Monte Capanne, with its ancient forests and spectacular views, giving you the opportunity to enjoy activities such as hiking.

Elba really has something for everyone. You can water ski, scuba dive, sunbathe at the beach, explore the history and culture of the island, or just choose a peaceful spot to relax, unwind and take in the beautiful scenery. 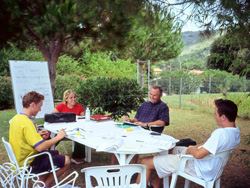 Elba is the perfect place to take an Italian course during summer time. Enjoy your free time hiking, relaxing on one of the many exceptional beaches or both! And, of course, you can taste all the fresh Italian delicacies. Being an island you’ll have many chances to eat freshly caught fish and all kinds of seafood.

Our Italian school in Elba is located in a 4-star hotel in Marciana Marina, just 10 km from the capital, Portoferraio. Make sure to book an Italian language course with Apple Languages today! 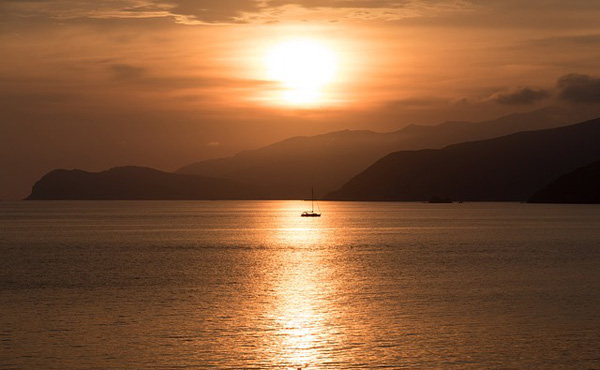