This is my third year! 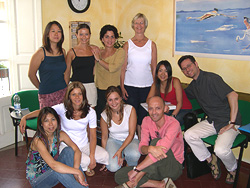 My name is Stephen Blackhust and I am Deputy Head Teacher of a large comprehensive secondary school in Luton, Bedfordshire. For the third time in 4 years, during the school summer holiday, I am spending 4 weeks studying Italian in Taormina, Sicily.

When, in 2005, I decided to put myself in a classroom for 6 hours a day for 4 weeks, having just completed a busy school year, many people thought I was mad. I must confess to having a few doubts myself, people often comment on the length of teachers’ holidays but in truth without them teachers simply could not keep going (neither could the pupils). And my mayor doubt was how I could cope without the long break to prepare far the re-start in September.

What actually happened was that that summer holiday, with its total immersion in Italian language and culture was both the most stimulating, challenging and restful break I have had in 28 years as a teacher!

The packages on offer at the school are wide ranged with courses to suit anyone. The first 2 hour sessions are Language Analyses (i.e. grammar plus), the second 2 hour sessions are Communication Activities (group work, role plays, going out into the city and interviewing local people, for example) . Beyond that, there are optional intensive classes, one-to-one sessions, and cultural activities such as cooking. The school also runs a wide ranging choice of extra-curricular activities, for example this week there are trekking trips up Mount Etna (currently with a large red scar down its south eastern flank clearly visible from Taormina at night) and a group going to see Puccini’s Tosca in the magnificent Greek Theatre. 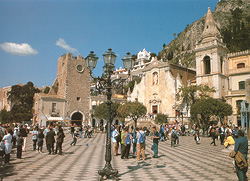 The school is friendly, professional in its didactic methods, thorough and caring for its students. As a teacher, it has been fascinating to get back on the other side of the classroom and watch others in action. The teachers’ characters and personalities are all part of the experience and help to keep the sessions moving; the time seems to fly fast – a good sign.

Groups are never more than 10 students and almost invariably are less. The students come from all over the world and the cosmopolitan feel of the school is an asset. Dispiritingly, once again, with nearly one hundred students in the school this month, I am one of only 2 from the UK. In class, there is a strict “no English” rule though if a teacher leaves the room or we think we can get away with it, we sometimes try until “Non devi parlare inglese” sounds in one of our ears. The quality and standard of spoken English from students in the school incidentally is staggering, often without even a trace of accent. The apparent inability of British people to understand the importance of learning languages appears to be even more deep rooted than ever and with the inevitable march of English towards lingua-franca status (if it’s not already there) even with the efforts of schools at home and centres such as this school in Taormina, we are doing ourselves a massive disservice.

The school is situated in the beautiful small Sicilian city of Taormina perched in a spectacular situation overlooking an attractive coastline with the view south dominated by Etna and north by the Straight of Messina and the Italian mainland. In August Taormina is hot, expensive, crowded and touristy but in truth it is also a living, working, small town. Taormina looks after its tourists, its visitors and friends, but you get a real feeling that if they were not there then very little would be different, even in August, you can find a quiet spot, the excellent local bus service will take you out of town and its not difficult to scratch beneath the veneer to find quite simply a unique and fascinating past of Europe with an amazing history, spellbinding things to see, wonderful food and wine and a people who without exceptions over 20 years of visiting Sicily we have found to be friendly, honest, open, welcoming, and genuinely happy that we have come to see their island and are interested in what it has to offer. 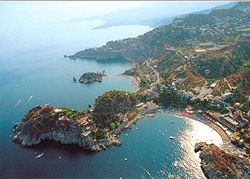 We have come to know many people in Taormina over the years, people who are on our Christmas cards list. Restaurants greet us as old friends, but we return time and time again as often the food can stand comparison with anything. Your view of mussels will be transformed once you have tried the local pepata di cozze, swordfish is a delight either simply grilled or as involtini (swordfish rolls with a fragrant stuffing). Normally whilst in Sicily I eat only fruit, vegetables and fish, I find I don’t miss meat at all and with the quality and freshness of these items you don’t really need anything else.

The pasta and risotto (the latter better you might expect far Southern Italy) are excellent. Sweets of all kinds can be found in pasticcerie around town. Roberto in via Bagnoli Croci with his window full of complimentary postcards produces Sicilian specialities of the highest quality quite simply to die for. His mother, now in retirement, used to run Mamma Mia, a little food gold mine where she used to make up Panini with whatever she had in the shop or whatever she had made in the last day or two. All around town we are greeted and people take the time to chat as when I called in at the Hotel Victoria on the Corso Umberto owned by the wonderful Pardo family who have been putting us up in Taormina for many years.

The language learning experience has to be a whole experience not just a classroom one. In Taormina, the experience is complete. People, architecture, art and culture, food, scenery and a healthy climate and life-style combine to provide a stimulating environment for personal growth and development. Having thoroughly enjoyed my first course in 2005, I returned in 2006 and again this year, in 2008, and I am looking forward to later in the month when my wife and family will join me. I will go home a couple of days before the new school year starts refreshed, stimulated, invigorated and once again very happy to have given another month of my life to an experience which I could recommend to anyone, anytime. Will I return? Ci vediamo l’anno prossimo!!!