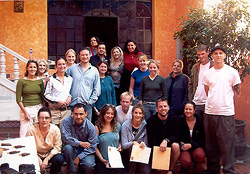 Living and studying in Guanajuato was an amazing experience! I really still feel the warmth of its sun within me and the friendliness of its people is something I’ll never forget. I miss practising my Mexican Spanish accent (which I felt so proud of!), trying to sound like a local.

Everything was so vibrant there! : the sunlight, the smell of the fruit, the smiles on people’s faces and the colours, the truly vibrant colours – the colonial houses, the clothes, the blue sky…. I simply loved wandering around its cobble stoned streets and discovering new cafés with lovely terraces in my free time, or listening to the tanned and potbellied mariachis’ deep voices as they sang in parks and on street corners. Every single day I met someone new to chat to. In a week I already had loads of new friends!

Etaín, Luis Ángel, Balandrán, Natalia and me used to gather in the Plaza Mayor to have a nice coffee and arrange everything we needed for our next excursion. We went to Cristo Rey (the second tallest statue in the world just after Rio de Janeiro’s!), La Valenciana, Atotonilco’s “Mexican Sistine Chapel”, San Miguel de Allende, Querétaro, Guadalajara and even Puerto Vallarta! 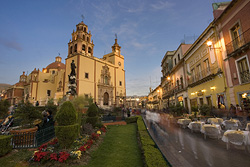 I made many Mexican friends and they were all the time telling me to be careful with what I ate because “European stomachs are very delicate”, I didn’t pay a lot of attention until I suffered from “Moctezuma’s revenge”, as my friends called it. Apparently, Moctezuma wants revenge against European people because they made his empire collapse. So if you ever go to Mexico be careful not to drink from taps, he may want to get his own back on you! And, trust me, it’s not nice. Anyway, after a bad day I was enjoying the lovely Mexican food again and the “Agua de Jamaica”, a great home made savoured water with a flower and some sugar. Another culinary speciality that grabbed my attention were the “helados de bote” a kind of ice cream that doesn’t have any milk. You could find them of any flavour you can imagine; in Querétaro’s market place we even found a snake-savoured one! None of us tried it though…

The school is located right in the centre of Guanajuato and the teachers are really friendly. It’s in a really nice building with a large patio, where we all used to meet up at break time. It has a really nice ‘Mexican’ feel in the welcoming atmosphere and vibrant colours of the walls.

I had a lot of fun going out at night. I wanted to experience what the ‘cantinas’ were like, but it was really difficult for Natalia, Eta and me to be allowed to enter in one because they were only for men! Finally we found one in which they let us go inside for some minutes. Then, I understood why Mexican women weren’t upset for not being able to go inside, it was so dirty and boring! But we were happy because we had finally seen one!

There is still loads of things I haven’t visited and experienced yet in Guanajuato. I had to come back home for my uni. But now that I’ve made really good friends there, I’ll come back soon!