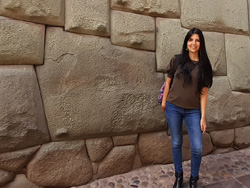 Cusco is the most fascinating and picturesque city I have ever been to; a place full of history with a rich cultural heritage. I would certainly consider this city to be the jewel of the Andes – it is a treasure that everybody should visit at least once in their lifetime! Cusco has so much to offer: its enchanting art and architecture, the many interesting museums, the nice bars and restaurants, and the beautiful landscapes around the city.

Since my first day I was captivated by the beauty of the main square, Plaza de Armas, with its majestic cathedral and the typical Spanish buildings. Cusco was once the capital of the Inca Empire, the largest empire in pre-Columbian America. The Inca Empire’s magnificent walls are still visible in many streets in the city centre. Walking through these streets, you can easily see the contrast between the Inca and Spanish building stones, as well as the Spanish colonial-style balconies dotted around the city. In fact, you could spend your whole time in Cusco just exploring and being fascinated by Inca masonry and construction methods! A particularly famous example of perfectionist Incan architecture is the 12-angled stone which forms part of the Archbishop’s Palace in Cusco. 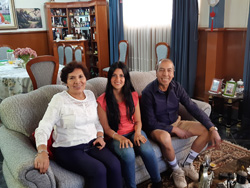 Peruvian people are amazingly welcoming and friendly, and I was very happy when I arrived at my host family’s house. They were waiting for me outside and gave me a warm embrace, immediately making me feel at home. They were adorable and very kind people; having such a lovely host family was an absolutely perfect start to my Spanish immersion experience! The food they provided was always tasty and healthy, and I especially enjoyed the home-made vegetable soups, rice, and papas (potatoes) – all delicious! I also had time for a lot of Spanish conversation with the family members and – even though they could speak some English and a little bit of Italian – Spanish was the only language spoken, making my total immersion language experience much more valuable.

On my first day at the school I took a level test and received an orientation session. The school normally gives all students recommendations about safety and mentions the rules regarding classes and the host family (basically, all the general things they need to be aware of during their stay). During that same morning I had the opportunity to join a city tour with a representative from the school. They took us around to explore the city centre, giving important information about where to find specific places and about the history and culture of Cusco. 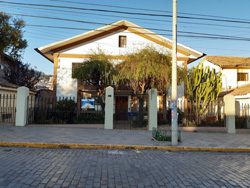 I was enrolled on an Intensive course of 20 group lessons per week. My classes started in the afternoon at 14:30, which was the timetable for the rest of the week, apart from the last day when I had morning lessons in order to join a half-day excursion in the afternoon. There’s a maximum of 5 students per class but there was only actually one other student with the same level as me, so our lessons were very personal and extremely useful in terms of progress since we both got so much language practice! Even after just one week of tuition, I feel so much more confident about my Spanish skills.

The course is based on communication, with a continuous interaction in Spanish between us and the teacher. During my short time at the school, I was able to improve my grammar, especially the conjugation of verbs in all tenses, and I practised the language extensively. This included talking about situations using the verbs and tenses I learnt. We talked about social issues and exchanged opinions with the teacher. We watched a story and a documentary, with a discussion afterwards. We then wrote our own story in Spanish and played games designed to expand our vocabulary. Evelyn, our teacher, was absolutely great! Her method of teaching, her motivation, and her enthusiasm during the lessons reflects her lengthy experience teaching foreign students. It was a very high quality of instruction, which even exceeded my own expectations (working in the language-travel industry, my expectations are high!).

I had also the opportunity to visit two local nursery schools in Cusco, where our language school organises volunteering programmes. The nurseries have children aged from 3 to 5 years old, and both are located about 20 minutes by bus from the centre of Cusco. I was accompanied by one of the staff from the school, who informed me that voluntary work is extremely helpful for the local community. The number of teachers do not seem to be enough for all kids and this support is very valuable to them. 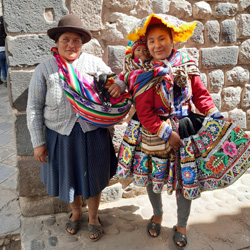 Cusco is a very vibrant city, with plenty of things to do and to see. It has good nightlife with lots of bars, cafes, restaurants. You will be spoilt for choice and they are all very cheap! I also would like to add that, as a woman travelling alone, I always felt safe and could comfortably walk around at night. I would obviously recommend that you take appropriate precautions, as you would in any major city. For example, even though I found Cusco very safe, I preferred taking a taxi at night to go back to my host family. Not only is it a safer and quicker way to travel, but the cost was just 7-8 soles (about £2) for 10 minutes. 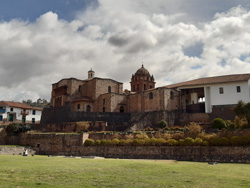 There are many museums and places of interest to visit in the city centre. I highly recommend Museo Inka, which contains important objects, gold-work, pottery, and vessels dating from the Inca period, as well as Museo de Arte Precolombino, which shows the artistic creation the ancient Peruvian peoples.

I also recommend a visit to Qorikancha, the most important temple in the Inca Empire, which includes Incan ruins and the convent of Santo Domingo. During the Empire’s heyday, the temple was covered in gold – I can only imagine how glorious it would have looked then – but when the Conquistadors arrived they quickly took the gold for themselves. Despite this, the ‘Golden Courtyard’, as the temple is known in the native Quechua, is still magnificent today.

For animal lovers, I suggest Campo de Artesanos, which is only 2 minutes’ walk from Plaza de Armas. Here I had a nice encounter with some alpacas and llamas – you can even take pictures with these beautiful animals. Another place to mention that’s worth a visit is San Pedro market, where you can really find everything, including clothes, handcrafts, souvenir, street food, all a low cost. Here I tried a typical Peruvian drink called Chicha morada and I wasn’t disappointed!

The school arranged many tours for me, organised perfectly, which allowed me to make some great memories during my stay. I recommend purchasing the tourist ticket (boleto túristico), which allows entrance to many archaeological sites near Cusco and some museums in the city.  It is possible to get a partial ticket for 70 soles, valid for 2 days, or the complete ticket for 130 soles with a validity of 10 days. On some of the tours I joined, I was the only non-native Spanish speaker. Listening to the guide speaking in Spanish was an additional lesson for me and I enjoyed it enormously! 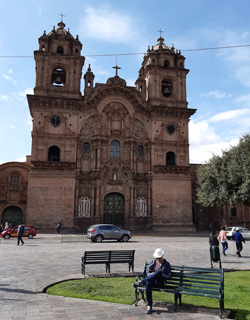 On Friday afternoon I visited the Cathedral and 4 archaeological sites not far from Cusco: Saqsaywaman, Tambomachay, Puka Pukara and Qenqo. I am passionate about ancient history and civilisations, which is one of the main reasons I chose to explore Cusco. The Inca ruins in Saqsaywaman are from an incredible fortress with huge stones used to build the walls, once all in gold. I was impressed by the size of the stones and the way they were perfectly put together.

Tambomachay is another interesting site, which consists of aqueducts and little waterfalls (also called the “Inca bath”) that are thought to have been used by the Incas for ceremonial purposes. Puka Pukara had military purposes, and I really enjoyed watching the sunset with the beautiful colours reflecting off the stones of the building, surrounded by such an amazing landscape. Qenqo is a site used for religious ceremonies and rituals and it includes small caves and an underground room where it is believed that sacrifices could have taken place.

Another excursion that I highly recommend and that the school organised for me is to the archaeological site of Moray and the Salt mines. Moray is an Inca ruin located about 50 km from Cusco that consists of several circular terraces descending to a depth of about 150 m. It is believed that the Incas created these terraces for agricultural experiments. The circles are enormous and perfectly made. The Salt mines, or Salinas, of Maras are made up of squares of salt spread in a wide area that have been used for salt extraction even before the Incas. The mix of white and pink colours contrast with the mountain and the blue sky to offer some fantastic scenery. 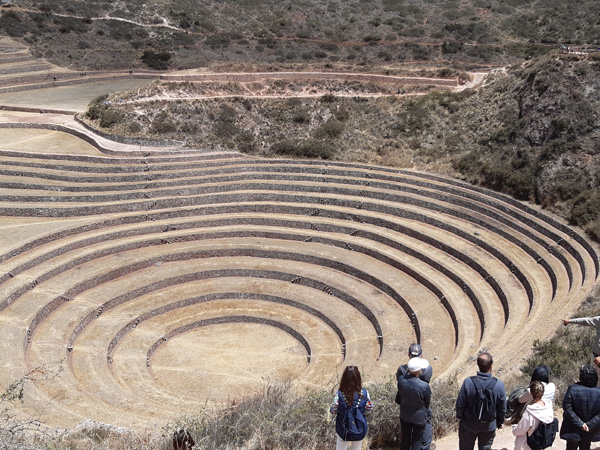 During the weekend I joined another tour to Pisac and Ollantaytambo, which are both part of the Sacred Valley. After visiting the popular Pisac market, I went to Pisac ruins, where I could admire the impressive terraces that Inca people used for cultivation and irrigation, as well as a fabulous citadel on the top of the hill. The next stop was Ollantaytambo; I cannot forget the steps to the main Inca remains, from where I could enjoy an astonishing view. This site was very important from a religious point of view, but it was also the place where the Incas defeated the Spanish Conquistadors in battle. On the same day, I took a train from Ollantaytambo to Aguas Calientes, where I stayed at a nice hotel, waiting for the biggest attraction in Peru: Machu Picchu.

I woke up very early in the morning the day after and took a bus to the Machu Picchu ruins. After about 30 minutes I was there, in the most breath-taking and spectacular place – I cannot describe the emotions and the excitement I felt in that moment in front of this amazing site in all its glory and splendour! This marvellous “lost city” was discovered about 100 years ago (although local people knew about its existence), and it has now become one of the seven wonders of the world. Fortunately, Spanish invaders never found this Inca settlement and couldn’t ruin the beauty of this place. It is extraordinary thinking that this citadel was built without the use of current technology; instead, it is the result of the Incas’ incredible ingenuity. It can take a few hours to visit the Machu Picchu archaeological site, and the site is only accessible at specific times, so I would highly recommend booking this trip in advance. 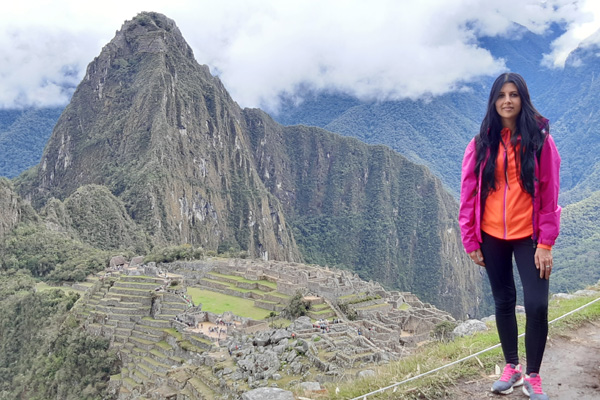 Monia at Machu Picchu in Peru

I spent two weeks in Cusco and I enjoyed every single moment, from my classes, the time spent with other students, the staff at the school and my host family to the amazing excursions I took part in and Cusco’s unique atmosphere. I can never forget this magical experience!