Immerse yourself in beautiful Warsaw! 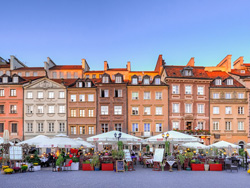 Would you like to learn Polish in an authentic environment and discover incredible Polish culture and history at the same time? Make it so by taking a language course with us in Poland’s wonderful capital city, Warsaw!

On a Polish course in Warsaw you will have the chance to experience the Polish way of life first hand. Admire the city’s impressive sights whilst improving your language skills with Polish native speakers.

This blog post’s aim is to provide you with interesting, historical and useful facts all about the charming Polish capital city of Warsaw. 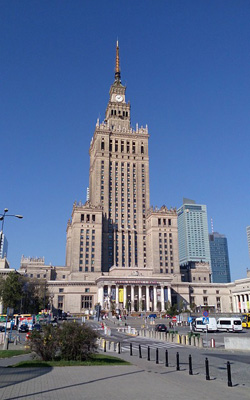 Warsaw might not be as big as New York, Paris or Moscow. It doesn’t have the popularity as London or Bangkok, or many other cosmopolitan cities around the world for that matter. However, this fantastic, sprawling Polish city demands to be explored. You will find Gothic and Neoclassical buildings, together with modern skyscrapers and impressive public parks.

You might not realise it, but Warsaw holds several impressive records:

1. The Załuski Library in Warsaw, which was opened in 1747, was Poland’s first public library and one of the first in Europe. In 1821 it was converted into a residential building. Fortunately, you can still find parts of the library’s collection in the National Library of Poland which is considered the successor of the Załuski Library. Go to the National Library to find your favourite Polish book and improve your reading skills!

This 237-metre-high building does not only accommodate several companies and institutions. You will also find a cinema as well as several theatres, museums and even universities and schools. As you can see ,the building well deserves its name.

Aside from taking a guided tour of the Pałac Kultury i Nauki it is also possible to go to the terrace from where you will have an incredible panoramic view of Warsaw!

3. The capital of Poland is home to the biggest city square in the EU: the Plac Defilad (Parade Square).

4. Visit the world’s narrowest house in Warsaw! The Keret House is located on a very small plot between two buildings and measures 92 cm at its narrowest point and 152 cm at its widest. Even though it seems impossible, you can actually live there. Travelling writers can even use The Keret House as a temporary home. Every year there are specific days on which the public can visit this remarkable house.

A wonderful legend for the symbol of Warsaw 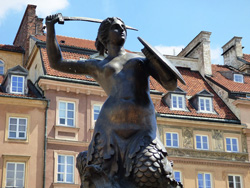 The Syrenka Warszawska (Mermaid of Warsaw) is the city’s most important symbol. You will find several mermaid sculptures throughout the city and she is also part of the city’s coat of arms.

There is a beautiful legend about the Syrenka Warszawska which you should know.

Once upon a time a beautiful mermaid and her sister lived in the Baltic Sea. However, at some point they got tired of their lives in the sea and wanted to go ashore. Her sister went to Denmark whereas the protagonist of this story decided to swim down the Vistula river. She was soon stranded on the banks of what we call Warsaw’s old town today. As she fell in love with the city (who can blame her?) she decided to stay. However, the kind-hearted mermaid started to free the fish from the fishermen’s nets. The fishermen were angry and wanted to punish the person preventing them from catching fish. When they saw the beautiful mermaid and heard her lovely singing though they couldn’t be angry with her any longer. From then on the villagers really became fond of the mermaid and her singing every evening.

One day, however, a rich merchant visited the city and walked along the Vistula river where he met this enchanting mermaid. Unscrupulous as he was, he wanted to sell the mermaid at a fair in order to make a lot of money. After she was captured by the merchant, a local fisherman heard the Mermaid’s loud cries for help. Together with a group of other fishermen he managed to free and save her from the heartless merchant. To thank the villagers for their help she promised to protect them and their village, which we know today as Warsaw!

When exploring Warsaw you should start with the old town which is proudly a UNESCO World Heritage Site! This is thanks to the incredible ability of the Polish people to reconstruct the whole city after it was almost completely destroyed in World War II. During the reconstruction process they managed to conserve historic buildings which were originally constructed between the 13th and 20th century,  maintaining the special characteristics of each era.

Once you are in the old town it is a must to go to the Kanonia Square. In this square you will find a big bell. Visitors that circle the bell three times are supposed to receive good luck!

Culture enthusiasts can go to the Zachęta Narodowa Galeria Sztuki, a contemporary art gallery with Polish art, or the Teatr Wielki, which is home to Poland’s National Ballet.

For those who prefer a more unusual experience Warsaw offers two extraordinary museums:

Warsaw – a green city by the river 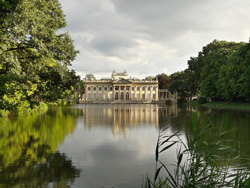 The name Poland derives from the tribe Polanie which translates as ‘people living in open fields’. It is not surprising, therefore, that the capital of Poland is known as a ‘green’ city.

As nearly a quarter of the city consists of green areas it really deserves this name. Warsaw is home to 88 parks and forest covers 14% of its area.

The Łazienki Park is especially worth a visit. It is Warsaw’s biggest and occupies 76 hectares of the city centre. From there you can admire several beautiful gardens and visit the ‘Pałac na Wyspie’ (Palace on the Isle). Originally built as a bathing pavilion, King Stanisław August later converted it into a neoclassical palace. You can also go inside this building to learn more about the everyday life of the king and his marvellous collection of art.

If you are looking for relaxation you should not miss the Vistula river. The Polish capital really takes advantage of its location at Poland’s largest river and offers some of the most beautiful city beaches in the world! Enjoy a green environment, sandy beaches and fantastic views of Warsaw. The river is the place to be if you want to experience life like a local. 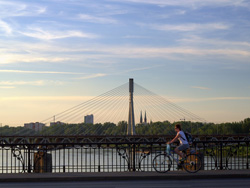 Warsaw offers an extensive public transport system which makes it very easy to get around. You can either use the tram, metro or several bus lines. There is also an interesting fun fact about Warsaw’s public transport: If you are born on a bus or tram in Warsaw you can use the city’s public transport your whole life for free!

If you prefer being outdoors you can rent a bike and cycle around the city whilst admiring all the wonderful things to see. Veturilo offers more than 300 stations where you can pick up or leave your bike. After a short registration online this service is a sporty and convenient alternative to public transport.

Warsaw really is the ideal place to go to learn Polish. Apart from learning in your teacher’s home you will also be able to delve into Warsaw’s history and culture, converse with the friendly locals and enjoy a green enchanting environment at the same time.