It’s so different from Sweden! 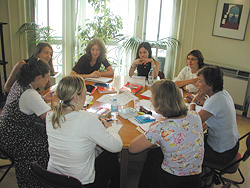 I loved my time in Lisbon! The most interesting thing when staying in a capital of a country is the variety of things that you can do, see and experience. Well Lisbon exceeded my expectations! Lisbon, also called the “7 Hill City” or “Lx” is a perfect mix of modern buildings and traditional architecture. Even if you walk 24 hours a day you will always find something to see and do in this never-sleeping city!

One thing that you will notice right away as you set foot in the city is the seafaring influence. It is found everywhere, from the architecture of the buildings to the monuments and the set up of the streets. In fact, being a coastal city makes of it a wonderful tourist place with several fantastic beaches. The beaches are AMAZING, with golden sand and greenish-blue sea and perfect conditions to practice most water sports. I went to a well-known beach called “Costa da Caparica” and I must say that I loved it. The friendly environment, animated people, hot weather and warm water provided the perfect conditions for an enjoyable time and I actually got a great suntan too!

The school organize LOTS of activities and excursions, so I signed up for a guided tour of the “Bairro Alto”, Lisbon’s most picturesque neighbourhood. Narrow cobbled streets, historic tram lines, houses with small balconies decorated with “Manjerico” (basi) museums, centenary houses, stylish restaurants, bars, “Casas de Fados”, all combine to make this a simply magical part of the city. It’s an impressive mix of both modern and traditional nightlife, a gathering place for people of all ages. As a fan of dance music, I just couldn’t ignore the amazing music coming from a house called “Café Luso”. It happened to be a Fado show that continued all nightlong enchanting everyone with the sound of the Portuguese guitar, beautiful voices …and all topped off with fine Portuguese wine! We decided to spend the rest of the day in the area and it really was a perfect evening, giving me the chance practise my language skills with the friendly locals and enjoy the catchy rhythms echoing throughout the maze of cobbled streets….It was a great introduction to the city 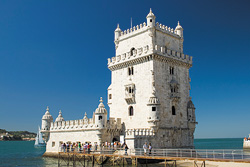 The school itself is well located near the biggest park of Lisbon, the “Parque Eduardo VII” and it’s an amazing place to unwind after classes, both close to the city centre and the beautiful river Tagus, which flows through the city. The school really is the perfect base when exploring the city since everything never seems to be far away and you can easily travel throughout the city by foot or using public transport, the bus, metro and my favourite, the old, stylish, historic trams.

Something that really stands out from the normal skyline is the “Cristo-Rei” (Christ King) a Catholic monument inspired by the Christ the Redeemer statue in Rio de Janeiro, Brazil. It’s located on the left side of the Tagus River bank and is 75 m (246 ft) tall, 113 m above the sea level. Impressive!

Talking about big things, the biggest shopping centre in the Iberian Peninsula, “Centro commercial Colombo” is easily reachable from the city centre. This massive shopping centre houses more than 400 stores, a multiplex cinema, covered amusement park and more! I easily lost track of time and spent my afternoon and evening in this shopaholic’s dream house, and I must confess, I got lost several times! Anyway, it’s certainly worth seeing, but don’t forget the city centre’s traditional stores with all sorts of quirky things. One store that stood out for me was one that sells wicker handicraft objects. Wicker baskets, covers for bottles, bags, boxes, trunk, hats… you name it! Impressive, traditional and stylish – and makes for a great, unusual present.

Lisbon is a nice city, peaceful but also vibrant and lively, however… on football days it changes completely! I must say that I was caught in a wave of red (S L Benfica) and green (Sporting C P) supporters converging at one of the 3 football stadiums of the city. It was brilliant, you could really feel the “healthy” rivalry between the city quarters and supporters. In the end it was a draw and both sides just ended up celebrating anyway, but I got the impression that the draw meant unfinished business for both teams.

Being a country deeply influenced by seafarer traditions and history, Lisbon was the host of the Worldwide Expo in 1998. They tell me that this Expo had a theme of ‘the Oceans’, and the Expo centre is now known as the “Parque das Nações” (Nations Park). This area is amazing with several restaurants, cafes, museums and a beautiful promenade along the river Tagus from where you can admire the massive (17 kilometres long) Vasco da Gama bridge. If you go to this expo centre, make sure to visit the Virtual Reality Centre, the Knowledge Centre and my favourite without a doubt – the Oceanary: One of the largest aquariums in the world, with over 450 different maritime species and a total astronomic number of 16,000 animals and plants. There are 5 massive separate aquariums, symbolizing each of the world’s oceans, emphasizing the concept of a globally representative aquarium.

My time in Lisbon really flew by, and even though this blog post is a bit longer than I’d planned it to be, I’ve still got so many more things to say about the places I went and the fantastic time I had – Maybe I’ll submit another post later on!

Anyway, I should finish by saying that studying Portuguese on a course in Lisbon is much more than learning a new language., as you’ll see if you decide to take my advice and go on one… It’s also an experience of assimilating centuries of rich seafaring history with the Portuguese traditions of Europe’s most western country and with everything that Portuguese culture and the Portuguese way of life (so different from my native Sweden!) have to offer!

I can’t wait to go back, but until then I can only admire the tons of pictures I took during the course!