Edinburgh is simply a masterpiece 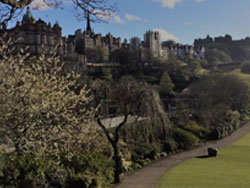 As soon as I stepped out of the airport, it was love at first sight. There are convenient buses right at the airport exit which, at a great price, take you to the heart of the city centre. This short journey is already spectacular in itself: gorgeous views, monumental palaces, castles that stand in the sky in the distance, make this lovely city truly valuable, which defines it as the modern, cosmopolitan capital of wonderful Scotland.

Talking to the locals, walking through the streets you can experience, for a moment, the laconic, sentimental Scottish patriotism, which is not so much pure nationalism, but is more like love for their homeland – a land made up of unique sounds and colours.

The Scottish lifestyle is not very different from that of any other British or North European city, but the thing that sets it apart from the rest is the fact that it takes place in such a magical city. 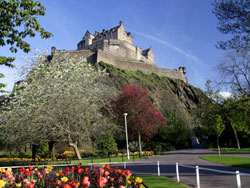 When crossing the city, you are truly astounded to observe the contrast of the ancient, Victorian architecture and the majestic rocky ground. Strolling along the park below Prince Street you can breathe this magical and colourful atmosphere, which is intensified by the weather: Sunny moments suddenly transform into a grey and rainy sky that makes the tormented city landscape even more imperious. On the bridges, where you can enjoy the best views of the mountains and the city, you can see hornpipe players dressed in typical Scottish costumes, that transport you to another time.

Nearby, you can admire the majestic Edinburgh Castle, now home of the Scottish Parliament, which is located on a fortress. From the top, you can enjoy the breath-taking views of many locations, such as the Old Town, New Georgian Town, Calton Hill, another UNESCO-listed scenic spot, and the North Sea.

Harry Potter fans will certainly know that in this city, JK Rowling created the magical world of the beloved wizard from a bar nestled in the extraordinary streets of Edinburgh. Moreover, several places have appeared in the film’s production or used as an inspiration for the artificial creation of the scenery.

We can certainly appreciate the ‘magic’ in this supernatural place. In fact, from the city centre, you can participate in several short tours, many of which are free, allowing you to discover the monsters and ghosts that are hidden in Edinburgh’s palaces and castles. There are also a few longer tours that teach you the tradition of whiskey distilleries and their relationship with the major Scottish families.

But what you really can’t miss on your trip to Edinburgh is a tour of the wonderful Scottish Highlands! Early in the morning, many buses depart from the city centre to these untouched lands, where Scotland was able to make a real impression.

Thick forests, rocky hills, small rivers, lakes and beautiful highlands are nestled in a silent, windy light grey landscape. These allow you to feel the power of an impenetrable nature, that was untouched even by ancient conquerors (you can remember that the Roman Empire renounced at the conquest of these lands). Sometimes the dramatic sky is interrupted by the majestic flight of pheasants, who are the real Highlanders, along with the Highland cattle, who gracefully cling to the lands. They are also very approached by man, reminding us of the immense hospitality of every Scottish living being!

When you pass the Forth Railway Bridge at the gates of Edinburgh, which is also declared a UNESCO World Heritage Site, you will later discover the small town of Pitlochry, one of the gateways to the Highlands which lies on the river Tummel. Continuing your travels through the spectacular and unique wilderness of the Cairngorms National Park, the largest National Park in Scotland, you will firstly arrive at Aviemore, and then at Inverness, the capital of the Highlands. Perched picturesquely above the river, Inverness Castle dominates the horizon of this thriving city. 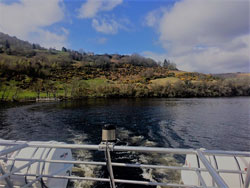 This will be a ‘monstrous’ tour, in fact, from Inverness, you can go to Loch Ness. Loch Ness is the largest body of water in Britain by volume, incredibly, all lakes and rivers of England and Wales would fit in it. With these dimensions, it’s not surprising that a monster lives in the depth of the Loch: the famous Nessie! I highly recommend a small cruise on the Lake of Loch Ness, as from the centre of the lake you will enjoy an unforgettable view of the surrounding Highlands and the Urquhart Castle. For a moment, you will feel like a real part of this wonderful land.

You continue until Ben Nevis, the highest mountain in the UK, then Fort William, also known as the outdoor capital of Scotland. Lying in the shadow of Ben Nevis and on the shore of Loch Linnhe, its setting is dramatically beautiful.

The next stop at Glen Coe will be really exciting.

Glen Coe is broodingly beautiful and steeped in history. It is in the centre of an extinct volcano which exploded millions of years ago, leaving the rocky mountainous place we see today. As you stand at the mouth of the glen, you’ll feel the past come to life as the guide tells you about the terrible massacre of Glen Coe. You’ll learn the parts clans Campbell and MacDonald played in this brutal part of Scottish history. The other side of Glen Coe is Rannoch Moor, one of the last great wildernesses: 50 square miles of peatbog and marsh, and a site of special scientific interest.

The Stirling Castle will be the last  image you will take in of the Highlands before to coming back to Edinburgh, after having spent, possibly one of the most unforgettable days of your life!