An undiscovered beach in the south of Spain! 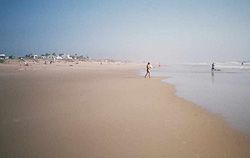 The beach of El Palmar

Only nine kilometres from Vejer, between Cape Roche and Cape Trafalgar, lies one of the most spectacular beaches of the Andalusian coast – El Palmar. The beach of fine golden sand is more than four kilometres long and an average of 50 metres wide. In summer it is one Vejer’s main attractions. To get to El Palmar take the 2131 at the junction with the N340 – the same junction which gives access to the road leading up to Vejer. At the second junction, turn right, and from here you can see the fields of palmitos which have given El Palmar its name.

Although some tourist guides exaggerate in their descriptions of El Palmar claiming it to be “virgin”, it is nevertheless true to say that that most surprising aspect of El Palmar is the absence of big hotels and apartment blocks. There is very little building, especially in comparison to the rest of the coastal strip. To see this, take a walk from El Palmar to the Trafalgar lighthouse – sand dunes and rocks and an occasional house in the distance or a chiringuito (beach bar), and miles and miles of sand.

The atmosphere on the beach changes according to the time of day and the day of the week. In the afternoons there is a calm family atmosphere, at the weekends things are busier and brighter, at night there’s an up-beat nightlife, and sports fit in at any time of day. It’s always a good idea to finish off an excellent day at the beach with a seafood or fish dinner in one of the restaurants at El Palmar or to have a drink at night in one of the chiringuitos with a dj or live music in the open-air. 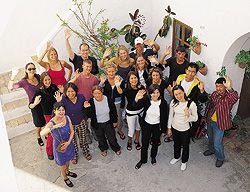 El Palmar is a wonderful place to practise sports such as traditional surfing (in Spring the national championships are held here) or kitesurfing, which has become very popular in the last few years. If you prefer fishing, you can do this throughout the year. In summer when there are people on the beach, fishing is limited to between 21.00h and 09.00h, but the rest of the year you can fish at any time of night or day. You’re sure to be lucky and take home a dorado, a bream or at least a mojarrita.

The beach is well-equipped in the summer with medical and health services – life-guards, ambulances, medical staff, showers and public toilets. There are also car-parks, a public announcement service, a tourist information point and recently a nursery has been opened to care for the smallest children. For the last few years the beach has been given the blue flag award in recognition of the local council’s efforts to preserve the richness of the landscape. The conservation of the ecosystem of the dunes which run between the beach and the road is very welcome.

A kilometre away from El Palmar, in the direction of Conil, there is a fortified beacon, the Torre Nueva, which was of great importance in the defence and guarding of the coast, particularly in the seventeenth and eighteenth centuries. This defensive construction is very common in the area and can also be seen in the watchtowers in the nearby Parque Natural del Acantilado de Barbate which were used to warn the local population of the approach of Berber pirates and other enemies.

The wonderful thing about studying at the school in Vejer de la Frontera is that there are so many unspoilt beaches, like El Palmar, just a short bus ride away!