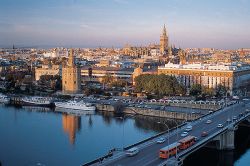 I had a great time during my spanish course in Seville, especially during the weekend my family came to visit me!

After the classes, the school always organised something so we could get to know the city and all the great things it has to offer!

It was March, but it was already extremely hot in Seville and my family, my parents and my grandparents decided to visit me for the weekend. They were quite impressed when they heard me speaking Spanish!

That weekend we decided to go to Isla Magica, an amusement park centred around a lake and divided into 7 themed areas depicting 16th century Spanish history.

One day isn’t enough to experience all that Isla Magica has to offer. In the Port of the Indies you can get a boat to sail around the Isla Magica so you can decide where to go first.

The Gateway to the Americas has a water coaster with drops of 7, 12 and 16 metres – it’s really impressive! However, the Amazonia was definitely my favourite place. And do you wanna know why?! Because of the El Jaguar Roller Coaster. And that’s not it! I was even more surprised when the only person willing to accompany me on the roller coaster was… my grandmother!!! Even today I can’t still believe she did it! The thing I liked most about the Pirates Cove was the big barrels when you sit and then they start to spin around very quickly! The Fountain of the Youths is for the little ones and that’s the only reason I didn’t go there!

In Eldorado the thing that I liked most was the rafting in the rapids with the rubber boat. I could really feel my adrenaline increase while we were doing it! Unfortunately I didn’t have the chance to get to know the Quetzal, The Fury of the Gods because the time runs so fast while you are there that you don’t even notice.

Of course Seville is much more than the Isla Magica. If you have the chance to go to Seville in April don’t miss the April Fair, the best one I have ever been to in my life!

One of the things that I also remember about Seville is the Flamenco Show I went to in Casa Carmen Arte Flamenco. It was one of the best shows ever!

Have fun in Seville!