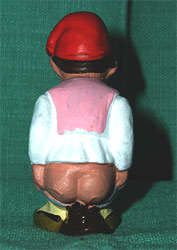 One of the most universally recognised symbols of Christmas is the traditional nativity scene: Mary and Joseph; the newborn baby Jesus; and the three Kings and other well-wishers that have come to bestow gift s on the child.

However, in Catalonia, another figure hides at the back of the scene. El Caganer is a uniquely Catalan character, who is depicted in the process of defecating.

A humorous character, the caganer is not intended to cause offence.

His place within the holy scene may seem a little strange, but in Catalan tradition this symbolises the fertilisation of the earth, and is supposed to bring a successful harvest for the following year, as well as luck and happiness to loved ones. 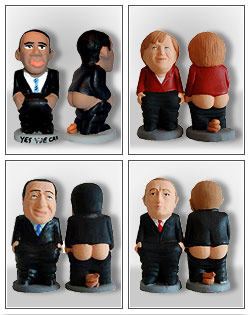 The caganer is also an extremely popular figure amongst Catalan children, who every year look forward to finding his hiding place within the nativity scene (el pessebre)!

Traditionally, the caganer takes the form of a peasant wearing a red barretina (the traditional red men’s cap worn in Catalonia).

Nowadays, the caganer often takes the form of the popular celebrities, sports personalities, musicians and politicians!

Attend a course at our Barcelona school over Christmas / New Year and buy your very own Caganer figure as a souvenir.