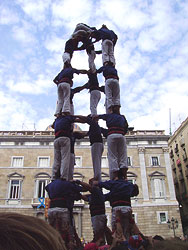 Firstly, I would like to introduce myself: I am Genta and last year I took a Spanish course in Barcelona. I love this wonderful city! It has everything! The sun, the beach, the narrow and romantic streets, the bars and clubs, good food, festivals, the best football… You never get bored!

I was lucky enough to be there during September and La Mercè. This is a local holiday throughout Catalonia and Barcelona celebrates every year with the festival of festivals, ‘La fiesta Mayor’! 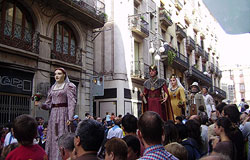 Every day I saw something different, with events going on in public places, where you can see it all for free! The Barcelona Acció Musical (Barcelona Musical Action) introduced me to loads of great new bands and groups, playing everything from pop to rock, flamenco to classical music. There were different open-air stages throughout the city, with both local and international artists performing!

As you may know, Barcelona is home to lots of street artists, and during La Mercè there are more than ever! I saw mime artists, street theatre, puppet shows – there was something for all ages! Also, the shows took place in different parts of the city; it wasn’t all in the centre. This gives you the chance to get to know a more authentic Barcelona, feeling closer than ever to the Barcelonians. 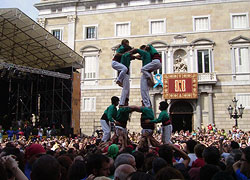 Then there was La Fest del Cel (the Party of the Sky), including aerobatic displays by planes, hot-air balloons and incredible light shows, all by the sea! It was a truly breathtaking show!

Of course, there were also lots of fireworks, in the shape of la festa del Foc (the Party of Flames). The Correfoc, where people in devil costumes dance around frantically with their hand-held fireworks, was amazing, and the pyro-musical finale was simply unforgettable!

I wouldn’t have missed La Mercè for anything and I couldn’t have chosen a better time to take my Spanish course. I hope you enjoy Barcelona as much I did!