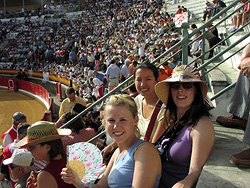 I’ve just come back from 4 weeks studying in Granada and it’s by far the most stunning Spanish city I’ve been to! I really loved every minute there. It’s unlike anywhere else – You realize this from the minute you arrive, with the incredible Arabic palace “La Alhambra” towering over the city, and the snow-capped Sierra Nevada Mountains behind – You just know you’ve arrived somewhere special!

There is also the stunning Albaicin area, the old town, in which there are a series of old narrow streets with typical old buildings and Moroccan stalls and Moroccan tea houses….where you get a real feel for how Granada would have been right back in the time of the Arabs.

Though Granada has quite a ‘young’ feel, with lots of students, it really is a great city for every age – whatever you like, you’ll love Granada – and it’s well situated, lying at the foot of the mountains (ideal for skiing/snowboarding in the winter) and only 30 minutes away are some of the most stunning beaches in Andalucia! 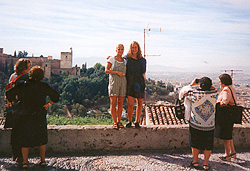 The school I attended in Granada, is really well located, in the beautiful Albaicin (old town) area, with its white-washed houses and winding cobbled streets, but is also within easy reach of the centre of Granada (just walk down the hill!).

The school is in a beautiful old building, surrounded by walled gardens and with spectacular views of the “Alhambra”. The classes are fantastic – the teachers all offer different teaching methods and so it suits everyone. The school is small and really personal, which I really like. It’s clear that the teachers are passionate about what they do and know how to make the classes fun! I really enjoyed my time studying at this school and hope to go back one day.

I really had a fantastic time in Granada and I think Granada is a city with so much to offer, a place which anyone would love! If you do come to Granada, make sure you go to the traditional ‘tapas’ bars, where you get FREE tapas (traditional Spanish snacks) with each drink!!!! – In other parts of Spain, you pay for Tapas, but not in Granada! – It’s special!!