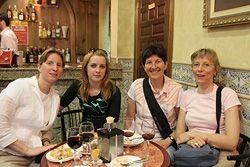 There is no better place on Earth to study Spanish than in Salamanca! The city’s majestic architecture, cultural history, and linguistic purity are unique characteristics that, for me, make Salamanca a city of hidden treasure.

Due to its lavishly decorated sandstone cathedrals and university buildings, Salamanca is so distinctively called La Dorada (“The Golden City”). Not only does the sun bathe Salamanca’s landmarks in resplendence right before sunset, but the city is rich with local legends and stories.

I tagged along a guided tour of the city and learned about the cleverly hidden “lucky frog” (“la rana de suerte”) on the main façade of the Universidad Civil building. According to legend, university students received good luck for a year with their studies if they found the frog without help. Nowadays, tourists will gaze upward for an hour in the hopes that they find the frog and are then blessed with one year of good luck. If you go to Salamanca, this is a must-do before you leave!

My favorite part of the tour came when we saw a former city palace, which is now Salamanca’s Public Library. The building is called La Casa de Las Conchas (House of Shells) and it is adorned with over 300 scallop shells, which some say is a symbol of love. I am more inclined, though, to believe that there is actually a great treasure hidden beneath one of the shells, perhaps the sole golden shell that stands out from all the others. 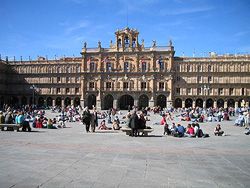 If you’re looking to get some loved ones a gift from beautiful Salamanca, try all the souvenir shops along the busy commercial center at Calle Zamora and you’ll find plenty of “lucky frog” memorabilia. You’ll also find (for the romantics out there) plenty of platería charra, which refers to the typical jewelry (silver and gold) that Salamanca’s inhabitants (“el charro”) wear.

Even though it was a bit chilly during my stay in Salamanca, that didn’t stop anyone from taking advantage of the many January rebajas (nation-wide discounts in retail stores after the Christmas holidays). The main shopping streets surrounding the Plaza Mayor were always packed with people looking for a good sale or a great place to enjoy Salamanca’s Iberian cuisine. The weather certainly doesn’t deter anyone (especially tourists) from experiencing the richness of Salamanca’s enchanting attractions.

Most students thinking of studying Spanish in Spain would opt for the bigger metropolitan experience in Barcelona or Madrid. However, the city of Salamanca is well-known for its culinary delights and vibrant nightlife. Its bars and clubs have all the splendor of those in Barcelona and Madrid, but without their overwhelmingly exhaustive crowds. Many bars have even been known to offer complimentary pinchos, which are slices of bread with different toppings (just like tapas). The Golden City’s restaurants offer fantastic service, a great ambiance, and internationally known pork meats and seafood typical of the Iberian Peninsula. Also, I personally wouldn’t go a meal without sipping on a refreshing glass of sangría or tinto de verano.

In Salamanca pretty much anything imaginable is within walking distance; its safety is unparalleled in other Spanish cities; and its pure Castilian Spanish accent make it a blessing for students looking to immerse themselves fully in the language. Even when watching Spanish-language sitcoms in my room I understood everything!

The school is in a very central location and offers a genuine multicultural experience. There is so much more to learn when you are forced NOT to speak your native tongue…such as when there are students from Russia, Japan, Germany, and Finland in your class! I came away from this experience not only learning tons of Spanish, but tons of Spanish culture specific to Salamanca…which, in itself, was a treasure that will keep me coming back for more.