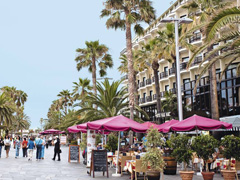 I am currently living in the village of Puerto de la Cruz in Tenerife. Part of the Canary Islands in the Atlantic, this fascinating village is situated on the north-west side of the island.

The village is actually a city because it has its own council, but it has a surface area of only 9 square kilometers. That makes it almost 175 times smaller than London. Even though it is very small, there is a lot to do. At least I think so!

Puerto de la Cruz has lots of small streets with bars, restaurants, shops and boutiques. One of the nicest places to go and have an early evening drink is Plaza del Charco, right in the center of the city. It is a really nice square with a lot of bars and restaurants surrounding it.

I believe the best place to have a drink at night is ‘La Compostelana Plaza’, which is actually a chain restaurant specialising in delicious pizza! You are never far from a restaurant or bar in almost every large square or street in the city and even outside of Puerto de la Cruz’s centre. 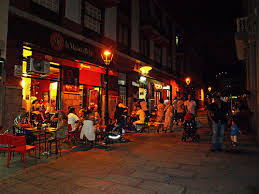 If you would like to go out at night, I recommend going to ‘la Bodega Aithamy’, also known as Medio Litro. You will find it located close to the Plaza del Charco, in a basement. Seems weird to some Europeans, maybe, but the drinks here go by half litres/pints and you pay, e.g., only €3,80 for a pint of rum and coke! They are quite generous with the rum, so normally just one will be enough.

Next to la Bodega Aithamy are Blanco bar, Limbo bar and the Sheriff, all locally famous places to go out. Be careful and make sure you get there before 12:30 as after this time you pay an entrance fee of €5,- at both Blanco and Limbo bar.

Puerto de la Cruz is a fishing-village and thus has a lot of beaches. What’s particularly remarkable about that these beaches is the black sand. Tenerife is a volcanic island and therefor the sand is black due to the previous eruptions of the famous volcanoe El Teide, which is also the highest volcanoe in Europe at 3,718 meters! 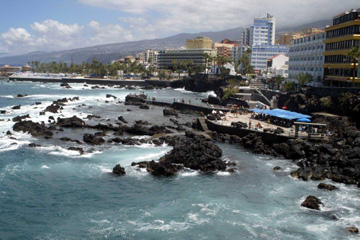 The most well known beach is Playa Jardín, just outside the city centre. This is also the largest beach. Be careful if you go there as there are a lot of rocks on the coast line. It is advisable to wear suitable shoes in venturing in to the water. Here you can also find one of the oldest “castles” of the city, Castillo San Felipe.

If you follow the coast line back to the centre you will pass the “Muelle” (the pier). This isn’t a particularly impressive pier, just made of concrete with a small beach consisting of stones and bricks, but this is one of the most popular places among the villagers. At this pier you can also find a lovely “Chiringuito” or a local restaurant. When you visit Puerto de la Cruz you must go there! They don’t have a menu, you simply choose the fish of the day – which couldn’t be any fresher. Make a note of the fact that they close at 5pm.

If you continue to walk further past the pier, you will come to, in my opinion, the most beautiful point of the city. Called “Punto de Viento”, it is literally translated as wind(y) point. From here you have a fantastic view of the coast line and the ocean. Recently there is also a “beach” here called Playa San Telmo. It is not very sandy as it is constructed out of stones and the rocks. You also can’t really bathe here because of the strong waves. If staying on the beach, be careful. There are lots of rocks in the water, so make sure you follow the rules.

Tenerife, although beautiful for beach life, is known for its strong water currents. You shouldn’t go in the water if the flag is red. 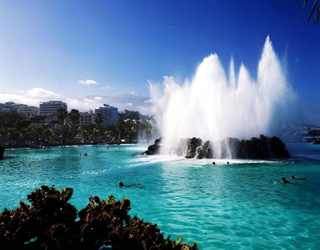 Next to Playa San Telmo you can find the pools of Los Lagos – El Lago Martianez. These pools are actually naturally formed. Everything around it is man-made, but it has a natural inflow of sea water. The entrance fee for Los Lagos is €5.50 per day. I haven’t been there yet, but I’ve been told that it is definitely worth a visit.

A little bit further you find the last and also in my opinion the most beautiful beach of Playa Martiánez. It is quite small, but also quiet. It is at the edge of the city, so not a lot of people go there.

The Spanish school where my internship takes place is actually located less than 2KM (7 minutes) from Playa Martianez. 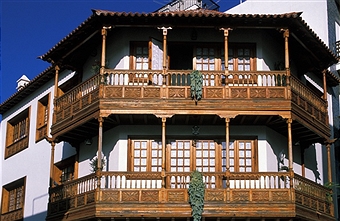 Visitors to Puerto de la Cruz may be a little disappointed if they are looking for a piece of history. Puerto de la Cruz only has 3 museums. There is, actually, a lot of culture to find if you know where. The architecture is remarkable, while a lot of houses have wooden balconies. These used to be a sign of wealth. The more detailed the balcony, the richer the family. I don’t know a lot more about the history of the city, apart from the fact that it used to be the capital of the island because it had the largest harbour. This type of trade has since moved out of the city and makes way for the locals and tourists that benefit from the weather and coastline.