Salamanca: my Spanish course in the Golden City 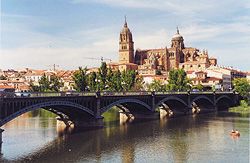 As the bus got nearer and nearer, I could see the sandstone buildings on the horizon glowing like gold when the sun shone on them.  What a sight!  In fact I was so impressed I had forgotten all about the rain clouds that had been following me all the way from Madrid.

Getting to Salamanca was actually really easy.  I had flown to Madrid and took a taxi from the airport to the bus station (Estacion de conde la casal, Auto Res).   From there I took a coach directly to Salamanca, which only cost about 24 Euros and took a little under 3 hours. Simple!

After the bus ride, although I was keen to stretch my legs, I’d have to have been very brave (or really fit!) to walk to the city centre with my luggage – not because it’s not safe, on the contrary, Salamanca is considered one of the safest cities in Spain.…….it’s just that it’s a long steep, uphill walk!

….So as I happily relaxed in a taxi, I was able to take in some of the sights in comfort and I attempted to ask the taxi driver some questions about Salamanca, which he was happy to answer (humouring my limited Spanish!) and he even gave me the extended tour of the city, pointing out some of the places I should go.

I quickly realised how easy it would be to get around Salamanca by foot, especially because everything you could possibly need can be found locally around the Plaza Mayor area.  There are a few supermarkets, a gym, a cinema and plenty of places to eat and drink.  In fact, in comparison to other Spanish cities, Salamanca is actually really compact and it has a population of just 180.000!

The school that I attended was situated in a grand historic building that has been fully restored and equipped with modern, spacious classrooms as well as all the facilities that you’d expect (air conditioning, video and conferencing room, vending machines, a library and free internet, to name but a few).

I really liked that although everything was new, the school has been traditionally revamped and it has a real authentic ambiance and a really friendly atmosphere.  There is even an outdoor patio with a typical Castilian well, where you can relax with a coffee, chat (and most importantly), get a sun tan during break times.  I thought the school was great because everywhere you look you are reminded that you’re in this wonderful Spanish city!

The Plaza Mayor is a great meeting place for students (and the locals too, you will see) and it is just 5 minutes away from the school by foot.  Just a little further away, perhaps 10 minutes, is the student accommodation.

Being a student, I naturally decided to choose to study in Salamanca as it has a reputation for being a wonderful student city, especially as it is home to one of the world’s oldest universities (hosting more than 35,000 students every year!) and also because Salamanca is also known as the city where the ‘purest’ Spanish is spoken.

As you all probably know, the night life is quite an important part of every student’s ‘rights to passage’, so I’m sure you can imagine why Salamanca has ‘quite a few bars’ (putting it lightly!), which stay open till the early hours.

However, do not despair, if you’re not a young party-aholic student and if dancing all long is not for you, because Salamanca has such great variety.

There are year round cultural activities, especially during the month of September for Las ferias y Fiestas de San Mateo, many art and sculpture exhibitions, concerts and museums such as La Casa Lis.

Don’t worry if you’re not the most organised, or perhaps not so good at looking ahead, because the school do a superb job of keeping their activities programme up to date so you’ll be sure not to miss a thing.

I would particularly recommend the weekly ‘tapas tour’, by the end of which you can expect to be a connoisseur of every kind of tapas.

I think that all that is left to say is, ENJOY YOURSELVES!