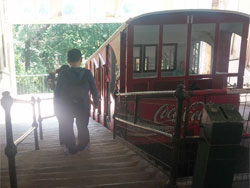 For the past couple of months, I have been suggesting to guests at my workplace that they go and catch the views over San Sebastian at the top of either Monte Igeldo or Monte Urgull. I finally got the chance to go and do this myself and I’m pleased to report that they did not disappoint!

Monte Igeldo lies at the end of Ondaretta beach (more on beaches in San Sebastian here) and a friend and I made the walk all the way along until we reached the old Furnicular to take us up the mountain. It only takes about 5 minutes to get to the summit, but the hills are steep so it’s definitely worth paying a few Euros for the trip. At the top of mountain there is an old theme park with a little rollercoaster, flume and even dodgems! The view encompasses the whole of Ondaretta, La Concha and the city behind it. My friend and I decided to walk down which rewarded us with views of the ragged coastline on the other side of the mountain and it was so quiet, you would hardly believe there was a whole city just behind us.

Despite the heat of the day, being crazy Englishwomen we decided to press on to go and visit the famous Peine de Viento sculpture which stands right at the tip of Ondaretta beach. It was lovely to visit as it is a well-known land mark in the city.

The following day we still had a bit of an appetite for walking so we decided to head up Monte Urgull. Recognisable from wherever you are in the city from the statue of Jesus which crowns its summit, the mountain lies in between the three beaches and is a place where many people go to walk and think, away from the hustle and bustle of the city below. The views from this side of the bay are also gorgeous and allow you to look out to the Atlantic beyond.

Simply put, San Sebastian is beautiful…why not come and check it out yourself?!