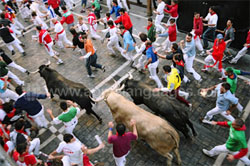 San Fermín, one of the biggest and most impressive parties in the world, takes place every year in Pamplona, Navarra from 6 July to 14 July.

After spending three days in Pamplona, I came to the conclusion that I will never be able to thank my friend enough for inviting me to San Fermín.

The first thing I needed to do in order to enjoy San Fermín as a true Pamplonica was dressing in white while wearing a red scarf. Once I satisfied this condition, I was ready to go!

Witnessing the Chupinazo, in which a rocket is launched to mark the opening of the festival, is simply breathtaking. You cannot imagine how many people actually manage to fit in the Town Hall square until you go see it yourself!

Once the Chupinazo is done, there are a million things to do! Have some of the best food you have ever tasted, visit the most famous tourist attractions of the city, have a drink in one of the amazing Navarra cafes, it is up to you!

In my case, my friend showed me around the city and took me to the best bars to have awesome pintxos (delicious tapas). If you are as passionate as I am regarding food, Pamplona is probably one of the best locations you will ever be able to travel to. The variety and taste of the dishes you can find is simply unbelievable!

But it is not until late in the evening when the real fun starts. The best way to start the party is by going to the beautiful Plaza del Castillo to enjoy one of the most overwhelming firework displays in the world.

The best thing about it is, you get to see a new one every single night of the week! After this, you will never run out of places to experience the nightlife of Pamplona. Whether it is in a bar, disco or even in the streets: the party does not stop until 8:00 in the morning!
Although I was quite tired at this point, there was no way I was going to miss the most spectacular part of this celebration. The running of the bulls. 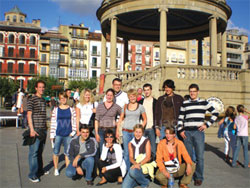 The encierro kicks off with a really touching prelude. The runners raise rolled newspapers while chanting to Saint Fermin, asking for his protection. After the famous “Viva, Gora”, two rockets are launched, which signal the start of the running.

After 825 memorable meters, the bulls finally arrive at the bullring a third rocket is launched, marking the end of the encierro. Finally, the dobladores, drag the bulls to the corral.

I could keep talking about San Fermín endlessly, but in order to understand it, there is only a thing you can do, experience it yourself!

Apple Languages offers Spanish courses in Pamplona all year round!