Why my year studying Spanish in Granada was unbeatable! 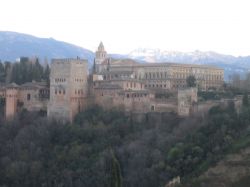 The first line of the Granada chapter of my Rough Guide to Spain reads, “if there is only one place you visit in Spain, make it Granada”. And my Rough Guide, as usual, was spot on!

I had the time of my life in Granada! There is so much that I loved about the city it is difficult to know where to begin. Everywhere you look there is some amazing sight or another. From the beautiful Alhambra Palace, to the snow-capped mountains, lively fiestas, flamenco dancers and the caves at Sacromonte, Granada has everything you could dream of. And don’t forget, Granada has a fantastic social scene, and the biggest and best tapas in the whole of Spain!

I don’t know if it was the sight of the Alhambra Palace on the hill everyday on my walk to my Spanish classes, the sounds of the Spanish guitarists playing in Plaza Nueva on my way home or just the unique character of the city and the fun people I met, but somehow every day in Granada felt special… and I was there for nearly a whole year! 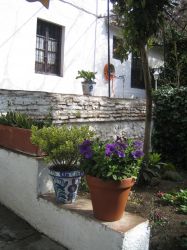 Whilst the palace and the cathedrals are pretty amazing, one of the things that really made Granada for me was the Albaicin.

The Albaicin is the ancient arab quarter of Granada, and is one big maze of cobbled lanes and whitewashed buildings, all of which have remained unchanged since the 12th century! I was so lucky – my Spanish school happened to be in the centre of the Albaicin and I used to spend hours wandering around the cobbled streets – you feel like you are in a time capsule! No cars, no noise, not even many people if it’s around siesta time – it is so peaceful. It feels like nothing you are seeing has changed in hundreds of years!

Each time I went exploring I’d discover a new tiny patio, minute tea shop, or incredible view over the whole city. There really is nothing else like the Albaicin in the whole of Spain and it is one of the things that made Granada so special for me.

Another reason I loved Granada so much was that I had so much fun going out! Did you know that Granada has one of the biggest and most prestigious universities in the whole of Spain and lots of international students from all over the world? Which means Granada has a justified reputation as a real party city, but in a completely laid back Granada-style. Nope, going out in Granada isn’t just about a bar or club or music scene – it’s a hundred times better than that!

For example, there is an amazing club called El Camborio which is actually built into the caves on the hillside, there are lots of little sections of dance floor spread between the caves. Then on the outdoors there are patios across three levels from where you get the most incredible view of the Alhambra by night. And El Camborio is not some kind of modern super-club… it’s probably been there about 600 years!

Granada is a really student-friendly city and I was amazed at how quickly I made friends. I knew I was going to Spain to learn Spanish but I hadn’t really thought that after a few months I’d actually have real Spanish friends that I’d be able to chat to in Spanish just like I would in English!

Seriously, I cannot recommend Granada highly enough as a location for a study abroad program. There is a lovely combination of welcoming people, gorgeous buildings, fiestas every week, fantastic food and drink, a relaxed lifestyle, Mediterranean beaches 45 minutes away, fantastic weather… in my opinion the place is UNBEATABLE! My year of studying Spanish, sunshine and sangria in Granada was one of the best of my life.