Stockholm in my heart 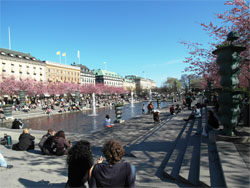 I just came back from my fourth trip to Stockholm and already I can’t wait for my fifth! Stockholm is a lovely place to be at any time of the year and its location at the coast and the warm Gulf Stream make it warmer than you might expect from a Scandinavian city. This year I went in early May when the weather had just taken a change and all the trees and flowers just started blooming. It was really a great atmosphere in the city with all the Swedish people taking pictures of the blooming cherry trees and waiting in long queues to get some ice cream at lunch break!

A must during any stay in Stockholm is a walk through the old town which is called Gamla stan in Swedish. This part of the city, like all of them actually, is located on an island and connected to other parts of the city via bridges, subways and ferries. Gamla stan is home to the Swedish Parliament House, Royal Palace and Stockholm Cathedral, among others. The medieval architecture and cobbled streets found here are, in addition to its unique waterfront location, one of the reasons why Sweden’s capital is famed for its beauty.

On a warm day like the ones just passed, you might also want to go on a trip to the Stockholm archipelago (Swedish skärgården) – a huge collection of rocky islands and islets that stretches from central Stockholm to about 70 km to the East! Many Swedes own summer houses in the archipelago (typically in the well-known red colour called faluröd in Swedish), and the countless little islands with their beaches, forests and rock hills forming natural observation platforms truly make up a stunning environment. 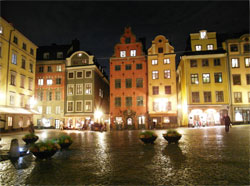 Since I had been there before, though, I spent more time of my recent trip in a part of the city that I hadn’t seen too much of before, namely the district of Södermalm in the South of central Stockholm. Apart from being a traditional residential area, Södermalm nowadays is also a centre for alternative culture and has lots of interesting shops, cafés and bars to explore. Typical dishes served include different kinds of quiches and sandwiches (often with shrimps) as well as kanelbullar (cinnamon buns) and – my personal favourite – kladdkaka (“mud cake”): a flat chocolate cake baked without baking powder so it’s extra soft, gooey and yummy.

Of all the things to do and see in Stockholm, here are three of my favourites: Firstly, the renowned Vasa Museum does live up to its expectations. Vasa is a Swedish warship that sunk on its maiden voyage in the year 1628 and was salvaged in 1961, having been preserved in the water for over 300 years. Next, for a cup of hot chocolate and a piece of cake, I’ve always enjoyed the tiny (!) Chokladkoppen right in the heart of Gamla stan. Last but not least, in the North of Södermalm, a bit tricky to find, there’s an elevated cliff called Skinnarviksberget. From here you get a fantastic view over the water and parts of the city including Stockholm City Hall.

Most Swedish people are fluent in English, so it can be hard for someone who is just beginning to learn the language to practise it properly in everyday life – people may answer in English in order to be polite. Apple Languages offers Swedish courses in the teacher’s home so that you can fully immerse in the Swedish language and culture and get the most out of your stay in this remarkable city!